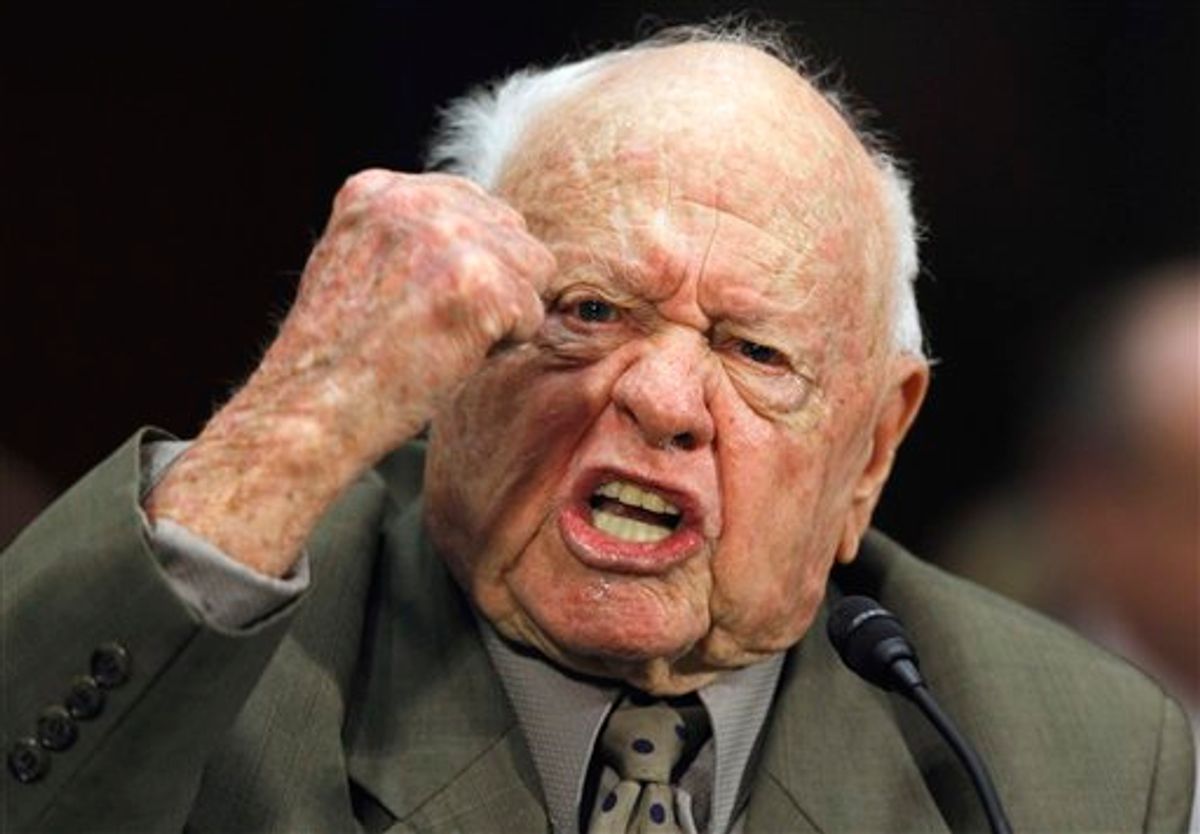 Of the many evil aspects of abuse -- whether it's physical, emotional or financial -- the shame that too often accompanies it, the way it can make its victims feel complicit in their exploitation, is right up there. But on Wednesday, one prominent survivor spoke to Congress to deliver a message to the world: "You are not alone and you have nothing to be ashamed of."

The message came from 90-year-old screen legend Mickey Rooney. In an emotional testimony before a Senate Special Committee on Aging inquiring on elder abuse, the actor told how he was kept a "prisoner in his own home." He currently has a restraining order against his 52-year-old stepson Christopher Aber. In court papers, Rooney has accused him of intimidating him, preventing him from leaving his house, and withholding his mail, medication and food. "My money was stolen from me, by someone close," he told the committee. "My money was taken and misused. When I asked for information, I was told that I couldn't have any of my own information. I was literally left powerless."

There are myriad reasons why the elderly are easy targets for abusers, from fragile physical conditions to memory-impairing problems like Alzheimer's to easily manipulated insecurities and misunderstandings about their legal rights or financial options. And the closer an abuser is to the victim, the easier the crime can be to pull off, and the harder it can be to break the silence. It all comes down, as it so frequently does -- whether the victim is a child or a woman with no support system or a Hollywood legend who's made over 300 films -- to the abuser's hold over someone who may not have the ability to leave.

Where do human beings go when they have limited options? What happens to Grandma when she's signed away her power of attorney? A 2009 Government Accountability Office study revealed that 14 percent of non-institutionalized older adults experienced some form of elder abuse in the past year,  and the New York Times reports that a recent Investors Protection Trust survey found that "one in five Americans over 65 years old had been defrauded." "About half the patients referred to us are cognitively impaired," Dr. Robert W. Parker, chief of community geriatrics at the University of Texas Health Science Center, told the Times. "They may come across as having normal social skills, but when we look more closely, we find they have lost their executive function, or their ability to plan, organize and remember details." And that loss makes them devastatingly vulnerable.

As lifespans increase and the boomers rapidly grow grayer, there's an unnerving likelihood that this form of abuse will become a bigger story in years to come. That's why the chairman of the Senate aging committee, Wisconsin Democrat Herb Kohl, said Wednesday he was introducing the Elder Abuse Victims Act to establish an Office of Elder Justice to give tighter protections to seniors, whom he described as "often fragile."

One of the main reasons child abuse horrifies us is because we all know what it feels like to be a trusting, helpless little boy or girl. Elder abuse shocks not just because so many of us owe so much to the older people who've enriched our lives along the way, but because they represent what most of us will someday be. When we think of the golden years, we try to imagine being surrounded by loved ones, proud of a life of accomplishments but with a life still rich in meaning and joy. The thought of becoming easy prey, a virtual prisoner -- regardless of how slowly one may move or how little hair is left on the head, no matter how many candles it takes to cover the birthday cake -- winding up in such a state is unfathomably horrifying. And even for generations of moviegoers who might only barely know Rooney from "Night at the Museum," his words before the Senate have agonizing depth. Because whether you've ever cared about an elderly person or just intend someday to be one, the stark, terrible truth of his testimony can't help but hit home. "When a man feels helpless, it is terrible. And I was helpless," he said. "If it can happen to me, it can happen to anyone."