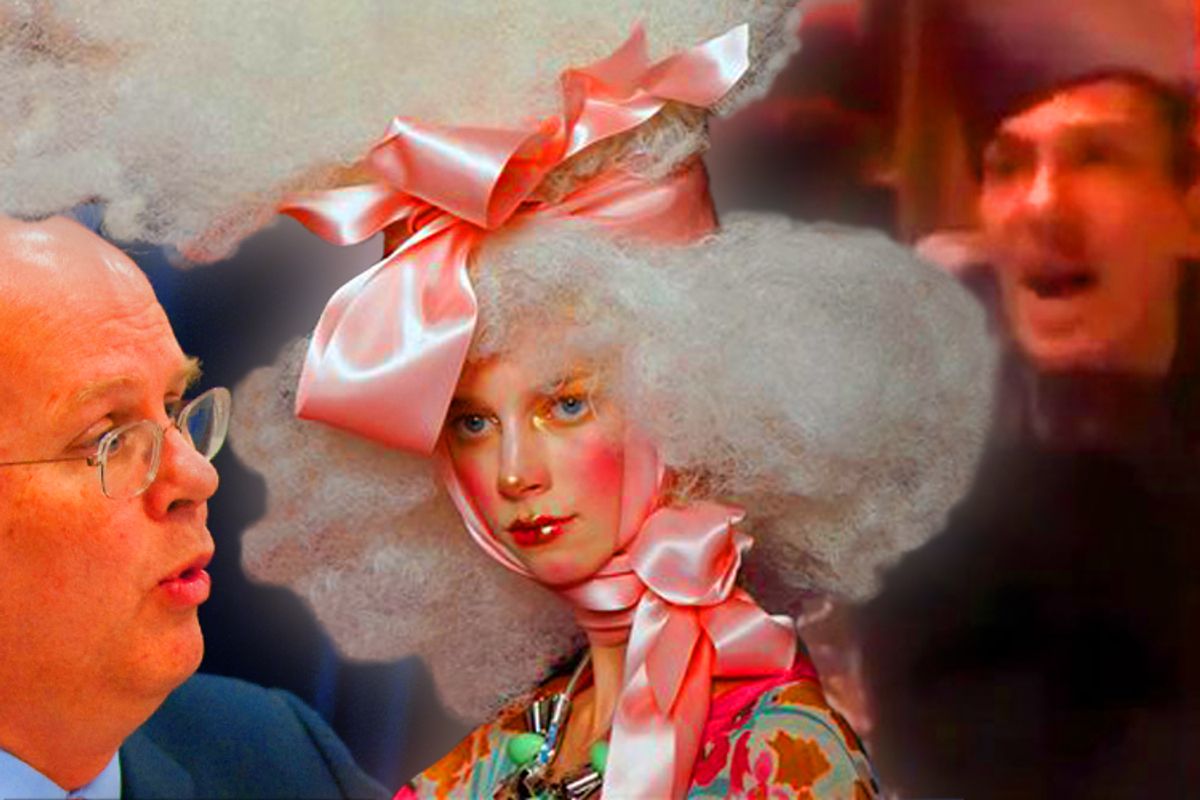 It has been a red-letter week for the grand-mal celebrity meltdown.

Charlie Sheen has proven himself to be the poet laureate of all once and future megalomaniac sex-addicted crackheads, and John Galliano's once brilliant design mind unraveled like a cheap acrylic Christmas sweater in a Marais bar, where he dressed down French patrons in a torrent of Nazi jackbooted verbal abuse, prompting excommunication from the worlds of both Natalie Portman and the house of Dior.

Several weeks ago, before any of this went down, I saw John Galliano's recent designs in Manhattan's newly re-opened Dior store. I believe I saw foreshadowings of his meltdown in those designs. I trashed the new Dior collection. I have been a longtime Galliano fan, but I felt his new designs were cynical, weak and irresponsibly barbarous.

Because I have spent several years translating fashion statements into English, I could literally read from the clothes that John Galliano was in a deeply miserable place -- the clothes themselves seemed to be screaming in agony.

Fashion is a language of references.

Galliano had always been the master of the Marie Antoinette-cum-Scarlett O’Hara-cum-imperial concubine look. But something about the new too-lavish details and hyper-expense suggested to me all the semiotic indicators of megalomaniacal dictator chic: a whorish criminal rococo for those who wanted to flaunt it.

I recognized Dior's new look as emanating from a certain dirty flavor of kleptocracy: I felt it was a look for Russia -- the sexy new Wild Wild East for entrepreneurial land sharks and hookers, made deliberately to "adorn mistresses and new trophy wives in the sartorial equivalent of hula skirts made from 500-euro notes."

"Not to put a peasant in the punch bowl," I wrote, "but Dior would make an ideal costume department for the Vlad Putin Hollywood vehicle, 'Kremlin, Inc.: Too Fast, Too Furious.' Moscow, after all, does not believe in understated elegance."

The idea that celebrity is toxic is one of the arguments I make in my first book, "A Massive Swelling: Celebrity Re-Examined as a Grotesque, Crippling Disease." I had a hunch that the hot psychological mess that was befouling the gowns and tuxedos of so many celebrities had a direct political analog/corollary, but I hadn't read enough things, and it was all too murky for me to really substantiate.

Now, I think it's all falling a little more clearly into place. (Bear with me, the dots do connect.)

A recent article in the Atlantic spoke about the new global plutocracy -- a loose-knit international coalition of first- or second-generation multibillionaires who hang around the World Economic Forums in Davos, Switzerland, and Bilderberger meet-ups and tend to view themselves as a separate community of interests informed by an interest in protecting their lifestyles of outrageous fortune.

They are a class unto themselves, in other words.

Top designers -- members of Galliano's own elite social class -- became his apologists: Donatella Versace commented that there is no justification for the insults but that she doubted Galliano had "meant to be racist." Giorgio Armani attributed Galliano's meltdown to a "moment of weakness," and told fashion reporters, "You can't expect exemplary behavior from an eccentric man like him."

Certain "exceptional" people -- either by name or industry -- happen to have some power and/or agency over large, swirling shit-storms of money. If these people have weak, fractured, underdeveloped egos, they tend, after a while, to go Boom. And the translation of these meltdowns, I believe, no matter what is said about Hitler, really boils down to two words: Stop me.

People like Galliano know they're not OK -- they want someone to stop them, and nobody does. Since they make so much money, they are allowed to flail around nurturing their darkest impulses and perversions. Untethered rich people act out the unrestrained id of toddlers and madmen -- they shit everywhere, literally or figuratively -- and their class-peers excuse this batshit crazy behavior as being mere "eccentricity" or "creativity."

An emotionally fractured superstar can foam around with rabies and bite people for years. Galliano's absurdly over-the-top anti-Semitic tirade -- and Mel Gibson's, for that matter -- has to be seen for what it is: a social form of Suicide by Cop.

At some point, the successful human commodity literally has to sabotage him/herself and stop being a functional commodity in order to save his/her own life, because the circles he/she inhabits will merely milk the cash cow, enable the ongoing self-destruction, protect it by hiding it, and "yes-man" a moneymaking one-person industry -- literally -- to death.

Donald Trump commented that CBS will rehire Charlie Sheen because he gets ratings, and ratings are the only thing that matters. Mel Gibson got away with slurring Holocaust denials in Hollywood -- the Israel of the Americas -- because he was still raking in cash in the movie theaters. John Lesher, a prominent agent, told the New York Times: "People here will work with the Antichrist if it puts butts on seats."

Power is a phenomenon that contains a personal component -- big power tends to emanate in the character of the person who wields it. The personality of a particularly pungent boss can be felt throughout an entire company -- the new Dior collection contained the character of Galliano, because he was the mind responsible for it. This is politically apparent as well.

The Bush administration took an imperialist stance, rooted in delusions of American exceptionalism -- i.e., America decided to view itself as Charlie Sheen. Because of America's tiger blood and Adonis DNA, the U.S. was too special to be understood by any normal country, so we decided to do strafing runs in our underwear before we had our first cup of coffee. Karl Rove's secretive, post-reality, ideological hubris resulted in a credibility gap that the American political system has yet to recover from. Dick Cheney's personal cornered-rat paranoia resulted in policies that ushered in a preemptive war on a sovereign nation -- and ever since, we are a nation that debates the merits of torture and lives in fear. Neoconservative fiscal policies ushered in the fastest, most balls-to-the-wall economic calamities that have ever happened in America. And American life, as a result, took on the morose character of the Bush administration: We became isolated, paranoid and morally bankrupt and ultimately broke -- a dry-drunk nation, in other words, that had totaled its car and lost all daddy's money.

The cultural superstructure tends to mirror what's going on with the prevailing power structure. Celebrity artists are emotionally labile, oversensitive people whose inner hard drives are often incapable of processing all of the weird input they get. Like canaries in coal mines, celebrities are early warning systems -- they are social malaise barometers: They tend to act out the psychological impulses motivating the prevailing sociopolitico-economic power structures around them.

Exploding stars seem to have the same illness shared by oligarchs, plutocrats, dictators, tyrants and serial killers. For the sake of discussion, let's call it Extreme Morbid Elitist Narcissism (X-MEN). It turns people into Superheroes that need to fight their biggest and only deserving enemy: themselves.

There is no comfort in perceiving yourself as being so exceptional as to be utterly divorced from the family of man. The inner poverty of having no common language of human experience -- nobody bigger than you, in your own mind, no equal or superior on earth or in heaven -- is deadly. To think of yourself as glaringly exceptional -- whether you are a designer or an actor or a country -- is to invite the most grievous form of hellish isolation. The super-elite person/class/nation who hates him/her/itself must punish and humiliate itself in the absence of a thunderbolt-hurling Zeus that will do it.

Even in the midst of an alcoholic blackout, anyone who grew up in this world in the last 50 years and ever owned a belt knows that shouting "I love Hitler" in an open space isn't going to go over well. But tyranny doesn't always manifest in racial cleansing, cannibalism, zipping your enemies into leather duvet covers with raccoons, or MC Hammer sunglasses. Tyranny is, at its root, the same disease that informs the self-defacement of plastic surgery addicts and/or the personal dictatorship of anorexia.

The Tibetan Buddhists view grandiose self-regard as not just a poor way to live and horribly embarrassing, but as a klesha: literally, a poison.

Richness and specialness is an expansive personal hell -- but ironically, people like John Galliano, Charlie Sheen and Moammar Gadhafi are even more terrified of escaping their hell than they are of living in it. To recover from their terrible specialness would mean they would be forced to recognize themselves as being potentially unspecial. Associating with the Great Unwashed and suffering unbearable indignities like flying coach again is something that people (or nations, or class structures) with "Adonis blood," or "tiger DNA," or the mandate of heaven, and/or several bazillion dollars regard as a fate worse than going down in a hail of bullets or going to jail (which at least means they are still exceptional: This makes them legendary outlaws, which in this demented mind-set is still way better than admitting you have real problems.)

In the lack of a dialogue about political economy and its effects on individual psyches, capitalist nations instead indulge the delusion that these things are unrelated. We are tacitly encouraged, as a society, not to see corruption as the product of elitism and power -- not class-related, in other words -- but accidental every time, a result of the personal weakness of the powerful individual, who we are encouraged to view as an aberration -- mentally ill, an addict -- an exception to the rule, rather than the norm.

The super-rich are so over-engorged, so coddled, so disgusted with themselves, they are turning into demons, because they have lost all touch with reality and all faith in the boundaries of a sane world. And when tyrants and stars, nation-states and classes believe they are Nietzschean übermenschen, beyond good and evil, there is, quite frequently, a body count.

John Galliano, people close to him have commented, is dying. He is murdering himself before our very eyes.