Even though economists think the unemployment rate edged up to 9.1 percent in February, this is good news for jobs 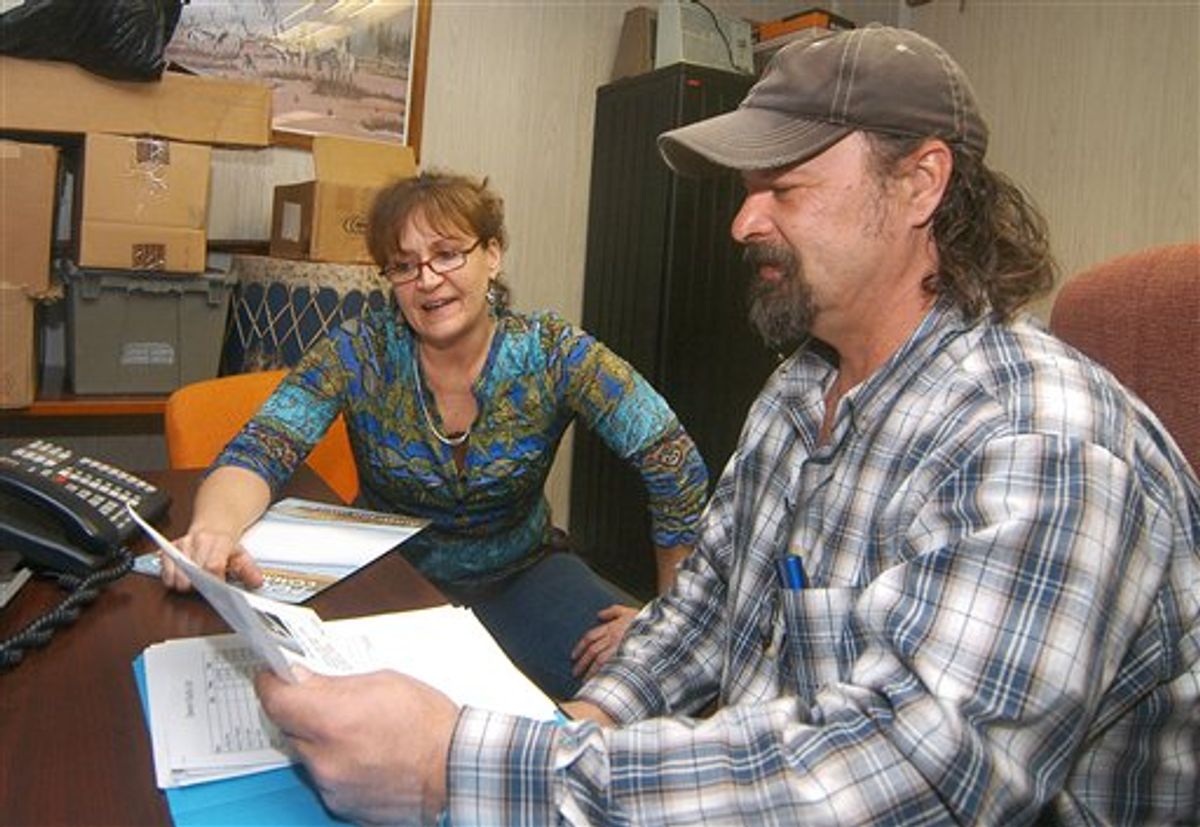 In this Jan. 18, 2011, photo Tanya Fiddler and Mark Shupick of the Four Bands Community Fund look over a case file in Eagle Butte, S.D. Four Bands teaches residents basic financial skills, looks for ways to bring in jobs and help those who are fighting unemployment and poverty. In the barren grasslands of Ziebach County, there's almost nothing harder to find in winter than a job. This is America's poorest county, where more than 60 percent of people live at or below the poverty line. (AP Photo/Doug Dreyer) (AP)
--

The number of people requesting unemployment benefits last week plunged to a nearly three-year low, bolstering the likelihood that companies will increase the pace of hiring this year.

Applications for unemployment benefits fell by 20,000 to a seasonally adjusted 368,000, the Labor Department said Thursday. It was the third decline in the past four weeks. Applications are now at their lowest level since May 2008.

Applications that remain consistently below 375,000 tend to signal steady declines in the unemployment rate. Unemployment benefit applications peaked during the recession at 651,000.

Analysts are predicting strong job gains in the February employment report, which the government will release Friday. Brightening the outlook for more aggressive hiring, the service sector expanded at the fastest pace in more than five years in February, and the manufacturing sector grew last month at the fastest pace in nearly seven years. And retailers are reporting solid gains for February after the best holiday shopping season since 2006.

Stocks surged after the economic data was released. The Dow Jones industrial average rose by more than 180 points in morning trading.

"Often at this stage of the recovery, when these signals are in place, we see a surge in hiring," said John Ryding, an economist with RDQ Economics.

Economists estimate that employers added a net 175,000 jobs in February. That would mark an improvement from an anemic 36,000 jobs in January when severe winter weather held back hiring.

At the same time, economists think the unemployment rate edged up to 9.1 percent in February. Unemployment rates often tick up when an improving economy causes out-of-work people who haven't been looking for jobs to start. People out of work aren't counted as unemployed unless they're job hunting. During a weak economy, some people become discouraged and stop looking.

Separately, retailers reported revenue gains for February, extending the spending momentum seen during the holiday season. Limited Brands Inc. and Macy's Inc. reported gains that beat Wall Street expectations, while Target Corp. announced an increase slightly below analysts' projections. The figures are based on revenue at stores open at least a year and are considered a sign of a retailer's health.

The service sector, which employs about 90 percent of U.S. workers, grew in February at the fastest pace in more than five years, according to the Institute for Supply Management. It marked the sixth straight monthly increase. The sector covers a broad range of industries including retail, health care and financial services.

Another report Thursday confirmed that workers boosted their productivity in the final three months of 2010 at the fastest pace in nine months.

The downward trend in applications for unemployment benefits suggests that companies are easing the pace of layoffs now that the economy is strengthening consistently. During the recession, companies slashed work forces, cut or froze workers' pay and took other aggressive steps to reduce costs.

Stronger job creation is needed to steadily reduce unemployment. Economists say it would take up to 300,000 new jobs a month to reduce the unemployment rate significantly.

An additional 4.5 million unemployed workers received benefits under the extended programs during the week ending Feb. 12. Altogether, 9.2 million people were on the benefit rolls that week.