Pick of the week: Can Matt Damon outrun God?

Pick of the week: The "Bourne" star and Emily Blunt challenge fate in a Philip K. Dick-inspired "Adjustment Bureau" 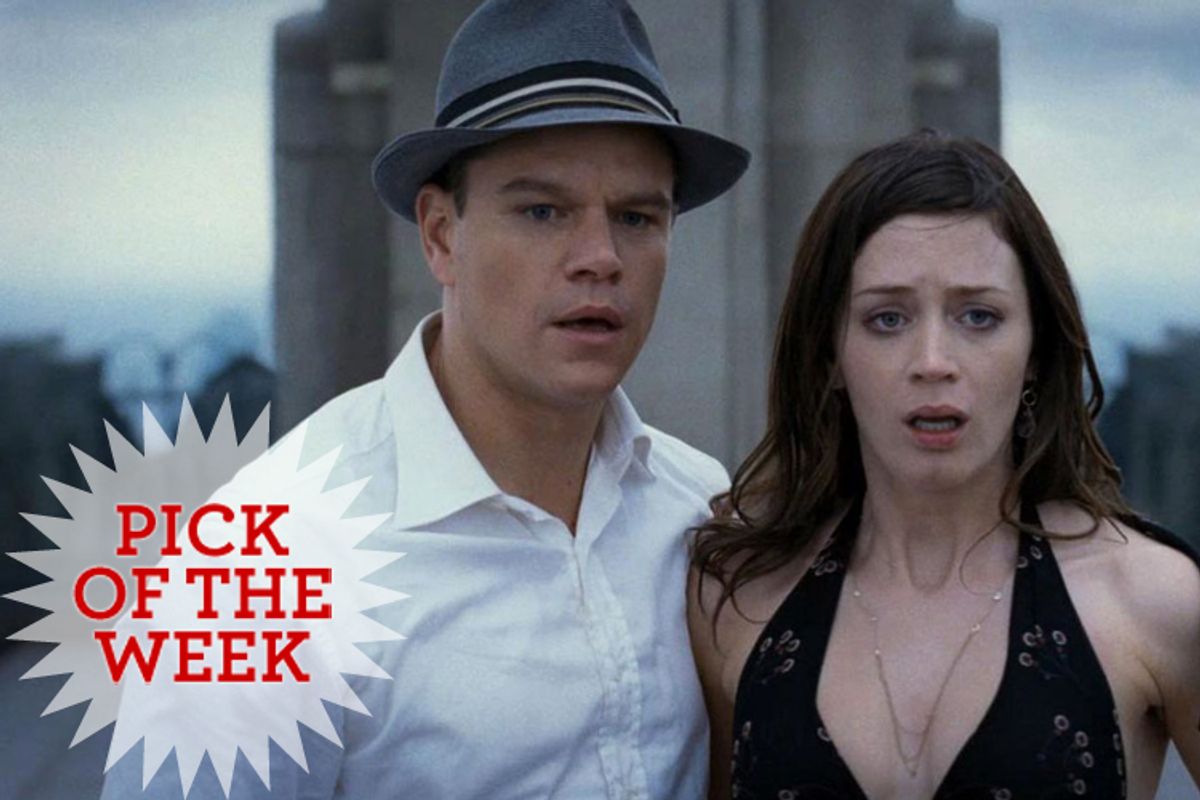 Matt Damon and Emily Blunt in "The Adjustment Bureau"
--

Here's the thing about "The Adjustment Bureau," which is a science-fiction romance featuring Matt Damon and English actress Emily Blunt as a couple on the run from mysterious men with hats. It's a somewhat awkward blend of ingredients, but not in the usual Hollywood fashion, where it often appears that nobody involved really gave a crap, or even bothered to watch the whole thing all the way through. Instead, "The Adjustment Bureau" is distinctly the work of one guy, and not a guy with Spielbergian or Scorsesean clout, either: Writer-director-producer George Nolfi is known in the industry as the writer of "The Bourne Ultimatum" and "Ocean's Twelve," but has never made a movie on his own before.

So the things that are odd about the film, like its blend of Philip K. Dick-trapped-in-"The Matrix" paranoia and cut-rate Augustinian theology, feel clean and organic, if that makes any sense. (It's based, very loosely, on Dick's 1954 short story "The Adjustment Team.") Nolfi's dialogue is lean and often funny, while Damon and Blunt play appealing and clearly delineated characters drawn together by the kind of old-fashioned romantic passion you don't often see in contemporary movies. You can feel the influence of classic American movies like "North by Northwest" and "The Graduate" here, and while I won't argue that Nolfi matches those examples, his ambition is admirable. I also appreciated that "The Adjustment Bureau" doesn't try to out-slick Christopher Nolan or the Wachowski brothers with high-style cinematography or mind-blowing CGI, even as it presents a universe where reality is not what you think, man.

Instead, Nolfi and cinematographer John Toll keep the movie calm and centered, sticking closely to the perspective of David Norris (Damon), a rising young New York politician who makes an unexpected discovery about the forces shaping his destiny. (I don't mean such people as Jon Stewart, Mike Bloomberg and James Carville, who all appear as themselves.) I wasn't a huge fan of Damon's acting in his youthful "Good Will Hunting" phase, but as he's edged toward middle age (he's 40 now) he relies less on boyish appeal and has grown tremendously in presence and technique. This is another in his recent series of underplayed, awkward, emotionally strangled American-guy roles (after "The Informant!" and "Hereafter") and might be the best. David is something of a quick-witted frat-boy type, who has risen from a tough Brooklyn neighborhood -- Red Hook, for my fellow Kings County residents -- and become the youngest congressman in history.

When he meets a gorgeous British party girl named Elise (Blunt) in a hotel men's room as he's preparing a concession speech, David is completely unprepared for what will follow. It's a terrific ships-in-the-night scene, with almost a Noel Coward sparkle, and given the circumstances it feels convincing. David has gotten crushed in an election he expected to win (the New York Post published photos of him mooning college classmates at a reunion), and his emotions are forcibly leaking out of his buttoned-up persona. As for Elise, she's a dancer and a choreographer and an impulsive hothead, exactly the kind of person who would hide from hotel security in the men's room and then make out with a congressman she's never met. The character could easily be a sexy-artist-chick caricature, but Blunt's performance is so fiery, funny and intelligent she never feels that way.

But what David and Elise won't find out for a while is that there's a reason they meet in that bathroom, and meet again on a Manhattan bus a few months later -- and also a reason they keep being pulled apart. (These are very minor plot spoilers, I promise -- but here's your chance to go elsewhere.) On his first day at a private-sector job after his electoral defeat, David winds up being abducted by a squad of fedora-wearing goons presided over by Richardson ("Mad Men's" ever-wry John Slattery), who seem to have frozen time in order to recalibrate David's boss's brain. These guys can travel through a system of secret New York doorways that behave like mini-wormholes, they carry little electronic books (something like an iPad with actual pages) that seem to contain an ever-shifting cosmological template, and they work for somebody called The Chairman, whose design for the universe is called The Plan.

"Are you guys angels?" David asks Mitchell (the suave Anthony Mackie), who seems to have been deputized to watch over him. "We've been called that," purrs Mitchell, before moving on to some semi-helpful obfuscation. (Apparently the Staten Island ferry is a good place to have conversations that God -- sorry, the Chairman -- can't overhear. You might want to keep that in mind.) All this exposition happens early in the movie, and the real questions in "The Adjustment Bureau" aren't about what's happening but why the Plan apparently dictates that David and Elise must be kept apart, and whether there's anything they can do about it. They can go on an exhilarating chase through those secret doorways, jumping from Wall Street to Yankee Stadium to the Statue of Liberty, that's what. (This is among the best uses of New York locations in recent years.)

Now, those questions engender other questions, and if those sound like debating points drawn from an episode of "The Twilight Zone," or a lecture by some Vatican II-style liberal theologian, you're on the right track. Have David and Elise stumbled into a Miltonic War in Heaven, in which Mitchell -- the only "adjuster" of color we ever see -- is playing the role of Lucifer? If we live in a universe designed by some Grand Poobah who stands outside time, is our sense of agency and free will an illusion? If there is indeed a Plan, how could anything ever happen that would deviate from it? If God needs a bunch of FBI agents in 1950s clothes running around making us spill our coffee to keep things running, then his professed omnipotence is a total hoax, isn't it? Or has he, in some grand New Age post-Thomist paradox, allowed us to become co-creators of the universe, along with him and the martini-smirky John Slattery?

OK, as you can see, either "The Adjustment Bureau" falls apart when you start to think about it, or you need to think about it a whole lot deeper and better than I just did. Nolfi makes no effort to conceal the Judeo-Christian roots of his premise (which is also true in the Dick short story), and if you object to infusions of pop religion into your science fiction -- I see you out there, fists clenched and slowly turning purple -- no doubt this movie will drive you nuts. But if you're looking for an end-of-winter cinematic palate cleanser that delivers a sweep-you-off-your-feet love story along with a few gooey, chewy, slightly silly philosophical niblets, then the Plan demands that you see this movie.