The serial deceit of Geoff Morrell

In the case of the accused WikiLeaks source, Geoff Morrell has proven how dishonest his statements are 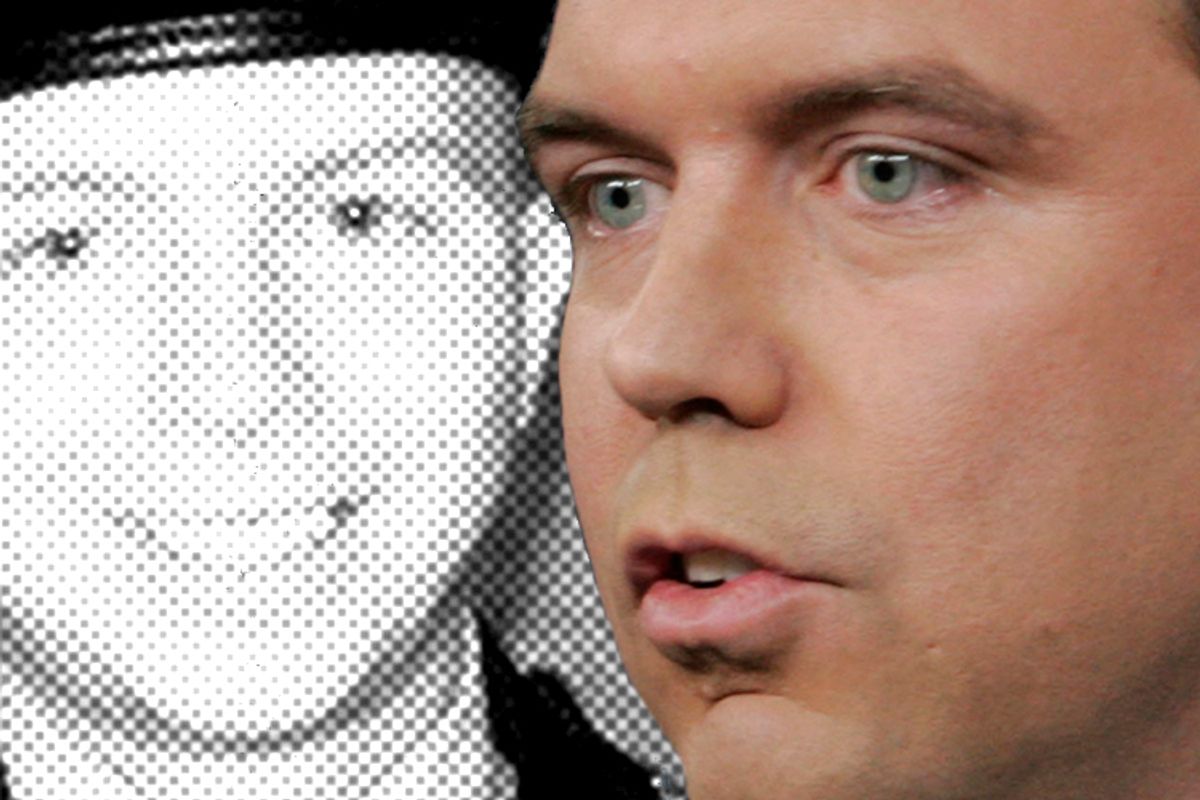 In the weeks since photographs of naked detainees set off the abuse scandal at Abu Ghraib, military officials have portrayed the sexual humiliation captured in the images as the isolated acts of a rogue night shift. But forced nudity of prisoners was pervasive in the military intelligence unit of Abu Ghraib, so much so that soldiers later said they had not seen "the whole nudity thing," as one captain called it, as abusive or out of the ordinary.

In addition to degradation of the detainee, stripping can be used to demonstrate the omnipotence of the captor or to debilitate the detainee.

Jane Mayer, The Dark Side:

[T]he CIA interrogators also announced they planned to become [Abu] Zubaydah's "God." They reportedly took his clothing as punishment, and reduced his human interaction to a single daily visit in which they would say simply, "You know what I want," and then leave.

A lawyer for Pfc. Bradley Manning, the Army intelligence analyst accused of leaking secret government files to WikiLeaks, has complained that his client was stripped and left naked in his cell for seven hours on Wednesday. . . . The soldier's clothing was returned to him Thursday morning, after he was required to stand naked outside his cell during an inspection. . . . First Lt. Brian Villiard, a Marine spokesman, said a brig duty supervisor had ordered Private Manning's clothing taken from him.

On January 26, 2011, Defense Department spokesman Geoff Morrell stood before the Pentagon press corps and made a series of patently false statements about Bradley Manning (the video is here).  Even taking into account the position Morrell occupies -- in which a penchant for telling the truth is not exactly a job requirement (it actually would be disqualifying) -- this Press Conference was an extraordinary display of pure official mendacity.

Morrell was asked several times about the evidence -- first reported here -- that Manning was being held in repressive and inhumane conditions:  specifically, 23-hour/day solitary confinement, a prohibition on exercising in his cell, and being allowed out only 1 hour per day to "exercise" which entails walking around alone in a room, shackled.  Morrell repeatedly insisted that everything being done to Manning was being done to all of the other detainees at the brig; in his words:

To describe those statements as "misleading" is to be extremely generous.  Morrell's claims were the opposite of reality:  factually and demonstrably false.   Manning was the only detainee being held under those conditions, the exact opposite of what Morrell told the public.  As Lt. Col. David Coombs, Manning's counsel, detailed that day:

Morrell stated during today's Pentagon briefing that PFC Manning's "confinement is not in the least different from the manner in which anyone else at the brig is being held."  This statement is patently false. . . .

Due to the POI watch, [Manning] is held in solitary confinement. For 23 hours per day, he sits in his cell. The guards check on him every five minutes by asking him if he is okay. He is required to respond in some affirmative manner. At night, if the guards can not see him clearly, because he has a blanket over his head or he is curled up towards the wall, they will wake him in order to ensure that he is okay. He receives each of his meals in his cell. He is not allowed to have a pillow or sheets. He is not allowed to have any personal items in his cell. He is only allowed to have one book or one magazine at any given time to read. The book or magazine is taken away from him at the end of the day before he goes to sleep. He is prevented from exercising in his cell. If he attempts to do push-ups, sit-ups, or any other form of exercise he will be forced to stop. He receives one hour of exercise outside of his cell daily. The guards take him to a room and allow him to walk. He usually walks in figure eights around the room. When he goes to sleep, he is required to strip down to his underwear and surrender his clothing to the guards.

Is there any way to compare the facts to the multiple statements made to the media by Morrell -- e.g., Manning " is being treated exactly like everyone else in the brig is being treated" -- and reach any conclusion other than that Morrell is a completely deceitful and untrustworthy individual?

Yesterday, Morrell went on MSNBC to be interviewed by Chuck Todd and Savannah Guthrie about a variety of topics, including the conditions of Manning's detention -- and by "interviewed," I mean:  have a series of open-ended questions reverently posed to him without the slightest challenge to a word he uttered.  Guthrie touted beforehand her intent to ask Morrell about Manning, but despite being told before the interview about the series of deceitful statements, and despite the fact that she should have been independently aware of that episode as a journalist preparing to interview the Pentagon spokesman, Morrell's false statements were, needless to say, never brought up.

Instead, typifying what Jay Rosen calls "the death of the watchdog press," Todd and Guthrie posed a few innocuous, open-ended questions to him and then allowed him to spout his talking points without being challenged about anything.  Just as Bush officials used to do when asked about Guantanamo, Morrell proudly announced that he had just visited the brig and was so very impressed with the "professionalism" of how detainees are imprisoned.   Just as Bush officials so often did, he dismissed objections this detainee mistreatment as coming from nothing more than "some on the far left, a couple of wesbites in particular, and one of the shows on this network" (are Amnesty International and the U.N. Rapporteur on Torture  "far left websites"?  and note how often Obama officials adopt the Fox-News/Bush-follower slur of dismissing their critics (on detainee abuse and otherwise) as those on "the far Left")?  But this time, Morrell -- directly contrary to his unambiguous claims in his January press briefing, was forced to acknowledge that Manning (whose conduct he said has been "exemplary") suffers restrictions to which none of the other detainees are subject (except one, he claimed).  Despite all that, Morrell smugly insisted that, based on his visit, the conditions of Manning's detention were perfectly appropriate and correct.

Morrell chose a very bad day to go on MSNBC with his subservient journalistic pets to invoke his Potemkin Village defense of Manning's detention.  Literally hours later, Lt. Col. Coombs detailed the forced nudity to which Manning had been subjected the night before and described how "Manning has been told that the same thing will happen to him again tonight. "  He added that "this type of degrading treatment is inexcusable and without justification," that "it is an embarrassment to our military justice system," and that "no other detainee at the Brig is forced to endure this type of isolation and humiliation."  James Joyner -- a former Army Captain and relentless critic of WikiLeaks and Manning -- added his own righteous condemnation of this conduct, accurately noting:  "This treatment would be an international scandal if done to an accused terrorist at Gitmo or to a convicted criminal on death row. "

Brig officials refuse to say why they forced Manning to remain nude, telling the NYT that Manning's "privacy" rights precluded comment (these are the same people who forced Manning to remain nude for hours and then stand that way for inspection; now they cite concerns for his "privacy" as to why they can't comment on why they did it).  Recall that in late January, NBC News' Jim Miklaszewski reported that the brig commander had violated the military's rules by placing Manning on "punitive" suicide watch even after two psychiatrists concluded he was not a suicide risk; the commander was replaced shortly thereafter.  And, as Joyner notes, to the extent that Manning has suffered a decline in his psychological and emotional state -- as Manning's friend, David House, has been warning for months -- it's because he's been held in patently inhumane and repressive conditions for 10 straight months now despite being convicted of absolutely nothing, with no end in sight.

It's long been clear that the Obama administration is subjecting Manning to this treatment in order to break him and thus induce the type of incriminating statements they need to build a conspiracy case against their real targets:   WikiLeaks and Julian Assange.   Moreover, the Obama administration's unprecedented obsession with deterring and punishing whistle-blowers is undoubtedly motivating much of this punitive conduct as well.

Whatever the motives, charging a whistle-blower with a capital offense of "aiding the enemy," sticking him for almost a full year in repressive solitary confinement, and then forcing him to remain nude in captivity, is the type of abusive detainee treatment that caused substantial political controversy during the Bush years.  Now, by stark contrast, the silence is deafening.

Morrell -- a former ABC News reporter before joining the Pentagon during the Bush administration -- is one of those countless Beltway officials who seamlessly travel back and forth between government positions and "journalism."   As his extremely amiable chat with Chuck and Savannah demonstrates, there is very little difference between the role played by establishment journalists and government spokespeople, which is why they're able so easily to move back and forth between the two.  And -- as his "far left" slurs and his Bush-like "I-visited-the-detention-facility-and-was-so-impressed-with-its-professionalism" defense demonstrates -- he's also one of those many, many bipartisan National Security State officials in Washington who fit every bit as comfortably in a Republican administration as they do in a Democratic one (just like his boss, former Bush and current Obama Pentagon chief Robert Gates).

This treatment is even more degrading considering that PFC Manning is being monitored -- both by direct observation and by video -- at all times. The defense was informed by Brig officials that the decision to strip PFC Manning of all his clothing was made without consulting any of the Brig's mental health providers.

Let's try to fathom the uproar and politically opportunistic protests from Democrats if it were the Bush administration treating an American whistle-blowing member of the military -- on U.S. soil -- in this manner.