His buzzed-up new fiction/science amalgam had me leaping to my feet -- to yell, "Die, yuppie scum, die!" 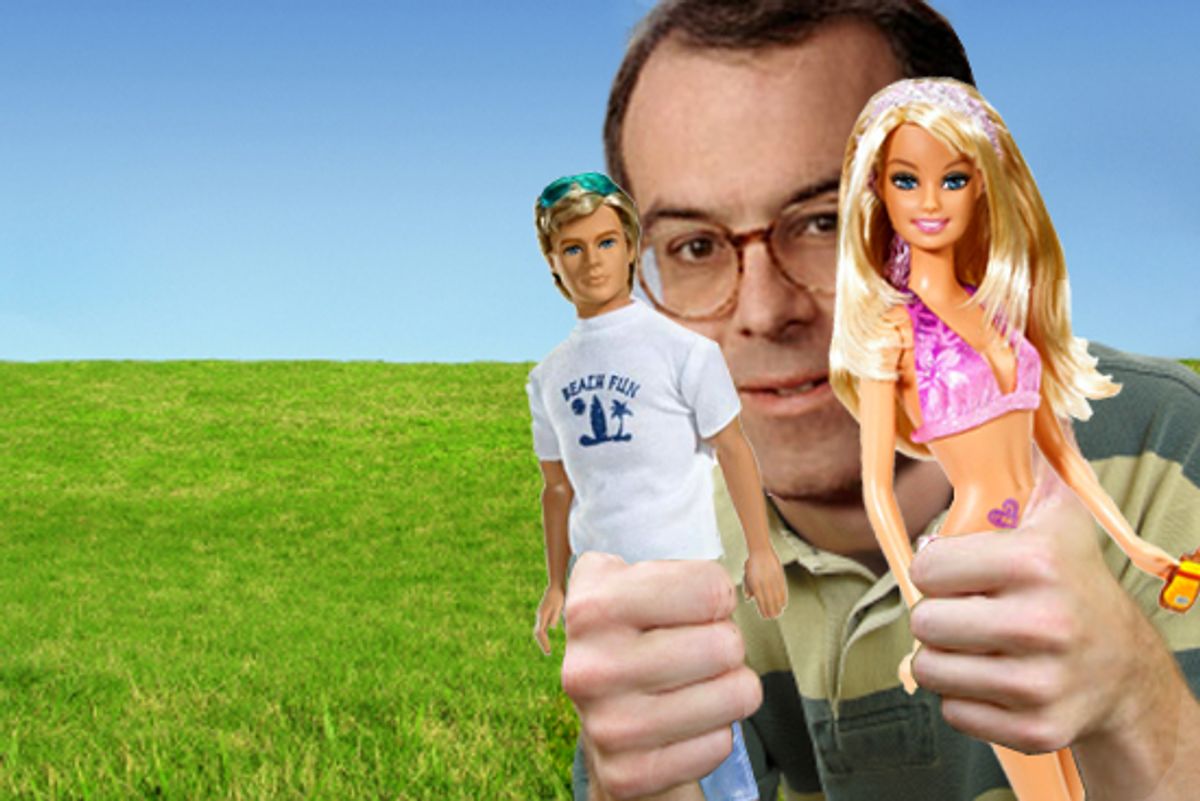 I made it almost a third of the way through the arid wasteland of David Brooks' didactic novel, "The Social Animal: The Hidden Sources of Love, Character, and Achievement," before I succumbed. I had begun reading it determined to be dispassionate and analytic and fair, but I couldn't bear it for long: I learned to loathe Harold and Erica, the two upscale avatars of upper-middle-class values that Brooks marches through life in the story. And then I began to resent the omniscient narrator who narrates this exercise in unthinking consumption and privilege that is, supposedly, the ideal of happiness; it's like watching a creepy middle-aged man fuss over his Barbie and Ken dolls, posing them in their expensive accessories and cars and houses and occasionally wiggling them in simulated carnal relations (have no worries, though: Like Barbie and Ken, no genitals appear anywhere in the book), while periodically pausing to tell his audience how cool it all is, and what is going on inside his dolls' soft plastic heads.

I did manage to work my way through the whole book, however, by an expediency that I recommend to anyone else who must suffer through it. I simply chanted to myself, "Die, yuppie scum, die," when I reached the end of each page, and it made the time fly by marvelously well. In addition, there is a blissful moment of catharsis when you reach the last page and one of the characters does die, although it isn't in a tragic explosion involving a tennis racket, an overdose of organic fair-trade coffee, and an assassination squad of rogue economists at Davos, as I was hoping. That's not a spoiler, by the way; the book is supposed to be all about the happy, productive life histories of Harold and Erica, from birth to death, so it's no surprise that at least one dies. It is incomplete, in that the other one survives ... an unsatisfying ending that I could happily resolve with one more bloody page, and that represents the only case I can imagine in which I'd ever ask David Brooks to write another word.

So what is this book about? It's a bizarre chimera, an unholy grafting together of a novel, the story of Harold's and Erica's lives, and an ideological, psychological, neurological and pseudo-scientific collection of materialist explanations for their happy situation. Every chapter whipsaws the reader between a fictional narrative about some exemplary event in their history -- birth, education, being attractive and popular, careers, relationships, corporate revenues, morality, European vacations and other such universal concerns -- and a pedagogical and often facile digression into the supposed neural substrates that drive and reward decisions that will make these two happy and fulfilled. Neither part stands alone, and together ... I'm sure there were delusions of a soaring synergy that would drive deep insights, but instead it's a battle between two clashing fairy tales to see which one would bore us or infuriate us first.

Consider the novel element first. It contains a straightforward narrative, a description of two people's trajectory through life. The plot is deadly dull: Erica, for instance, ascends smoothly from private school to business management to business leader to significant government functionary to the inner circles of Davos to a blissful retirement spent wallowing in high culture, with only brief stutters -- losing a tennis match, a failed business, a brief marital infidelity -- which she powers through with the discipline of her will, pausing only long enough for David Brooks to lecture the reader on how the mind overcomes adversity. What story there is here is pure mainlined bourgeois wish fulfillment, a kind of yuppie Mary Sue for the whole of the trust-fund set. There aren't even any losers to contrast with Erica's unending winningness, because everyone around them seems to be rising on the same cheerful bubble of privilege.

Nothing changes. In the introduction, Brooks even mentions this, that the story "takes place perpetually in the current moment, the early twenty-first century," so the characters are born in this decade, grow up in this decade, work in this decade, die in this decade. Brooks has created a world where history doesn't matter and there are no troubling external intrusions on the blithe reality of Harold and Erica. If ever you are in the market for the antithesis of the Great Russian Novel, here it is, the petty provincial string of anecdotes about only two characters who never experience a moment of self-doubt or inner turmoil.

The characters had potential, at least, and shouldn't have been so bland. Erica is Chicana-Asian, but the ethnicity is entirely nominal, and once she asserts herself to a patronizing billionaire with a private school and gains entry into the world of entitlement with his charity, any pretense of diversity is jettisoned, and she becomes merely Ambitious, Focused Businessperson, with the superpowers of Discipline and Drive. Even her sex is largely irrelevant, but to be fair, so is Harold's: They are a complementary pair of androgynous droids who, we are told, love each other deeply. Harold slots nicely into his role, too, as the Dreamy Academic Dilettante with the powers of Creativity and Synthesis.

There is nothing wrong with establishing a couple of clearly defined personalities in the story, of course. The awkwardness lies in how we learn about them; David Brooks is a "tell, don't show" kind of guy, and instead of revealing these personalities by their actions and speech, we're simply told by the omniscient narrator about the qualities of their characters. For a book that promises depth and insight into human values, this strategy is an admission of failure and narrative suicide. I don't care about Erica and Harold, and while Brooks may tout the importance of the emotional surges and connections that bring people together, I sure don't feel anything about their decisions. I'm just told.

For example, Erica makes a life-defining career decision: She meets a woman who runs a restaurant chain, who is thin and well-dressed in a conservative business suit, and Erica can imagine being like her someday, as Brooks tells us. And then, "Erica was suddenly consumed by a burning desire to be a business leader." What, how? Was it the suit? I don't know. We leapt from a superficial description of the appearance of a visitor to Erica's school to "Something had lit the furnace of the little engine of ambition, which from this day forth would know no rest," and on that train of stock phrases, a personality is fixed and launched unchangingly toward the end of the book.

Even Brooks would concede that his novel-within-the-book is not "Dr. Zhivago," and I don't think we're supposed to get any lyrical insight from his plodding prose. The special quality of "The Social Animal" is billed as being its melding of information from neuroscience into the story, to help us better understand how the unconscious mind forms our characters and helps us achieve success.

The book fails neuroscience, too.

I don't even necessarily disagree with the biological and psychological studies sprinkled in short, pithy summaries like shriveled little raisins of evidence in the gloppy porridge of his story; it's that they're just laid out so superficially and so discretely, with no discussion of how or to what degree or of context and significance. It's a collection of factlets. I imagine them as conclusions written down on 3-by-5 cards, committed to memory, ready to be succinctly flashed as displays of erudition at a business meeting, and nothing more.

The issue here is that Brooks is dealing with complex matters, and by trying to stuff all of the factors that might impinge on the entirety of two lives, he commits himself to dashing off no more than a few paragraphs about each, leaving them dangling unconnected to one another and certainly doing nothing to complement the literary deficiencies of the book. They are instead so incongruous that they almost provide moments of comic relief.

Harold and Erica, for instance, begin to fall in love. In the fictional episode of the book, this is represented by a moment of flat affect, when they are working out on their bicycles and take a moment of rest at the top of a hill to hold hands. That's "lovely," Harold thinks. Then, a few pages later, we get the technical explanation of what's going on: Harold's ventral tegmentum and caudate nucleus are releasing dopamine, norepinephrine and phenylethylamine!

Woo, as Homer Simpson would say, hoo. Harold's brain must be having a wild time.

That's it. Brooks drops the technical names of two brain regions and a couple of neurotransmitters, briefly mentions their association with learning and reward centers, and we hear nothing more about them for the rest of the book, and nothing in his abbreviated description helps us understand how or why or what. A proximate mechanical explanation is no explanation at all, especially if given to an audience that most likely has little awareness of what a brain nucleus represents, or what these chemicals do. They are polysyllabic magical incantations that allow shallow people to pretend to have knowledge.

The technicalities don't illuminate the story in any way, and the story undercuts the science. Ultimately, the neuroscience in the book feels a micrometer deep and a boring lifetime long, with the fiction of Harold and Erica giving the impression that it's built on a sample size of two, and both of them utterly imaginary.

I don't know whom this book is really written for. It's definitely not going to satisfy any scientists, or even any informed people who want to know more about how the brain works — there's no technical meat on the bones of this farce. It's certainly not going to satisfy anyone hoping for literary quality, or beauty and poetry, or even a good story. I suspect that its only virtue is in uniting C.P. Snow's two cultures, both of which will be populated with peeved readers flinging the book with great force across rooms everywhere.