Somebody stop this thing!

Why do planes sometimes slow down so abruptly on landing? Isn't that a little reckless? 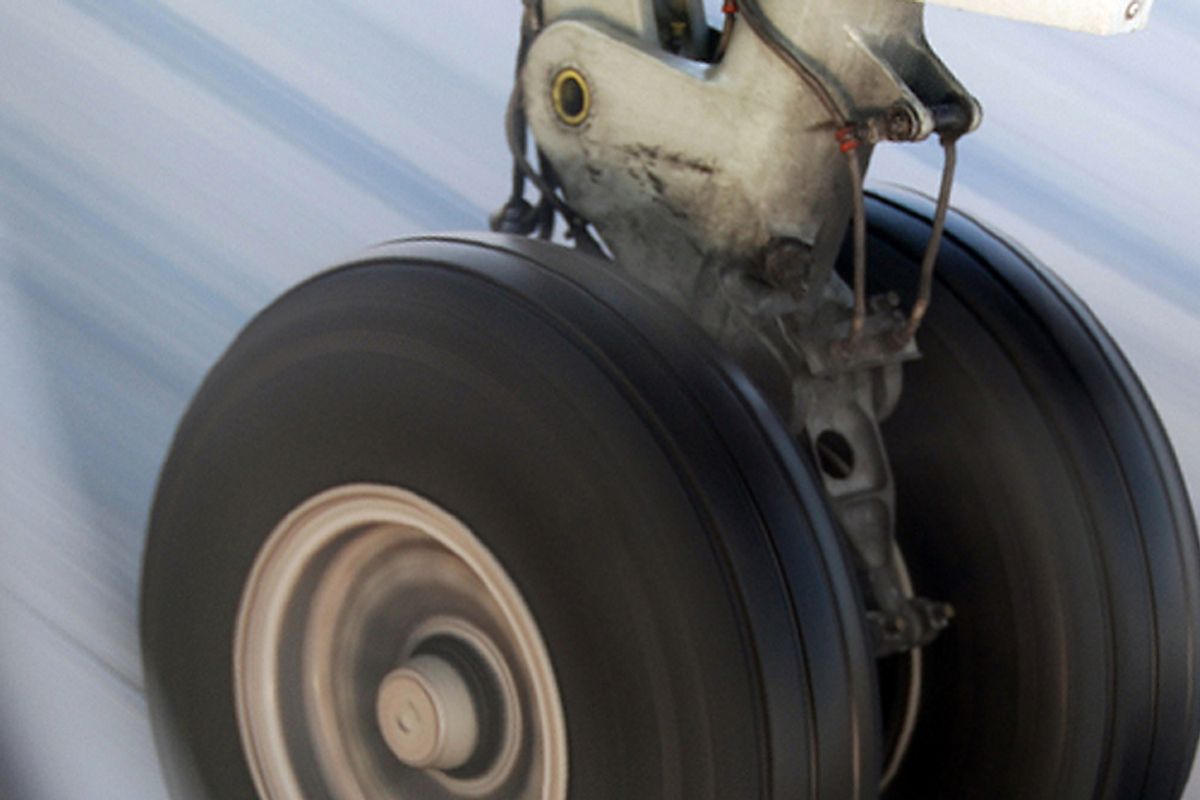 Let me respond to a complaint by somebody calling himself "jackg86." In the letters forum at the end of last Tuesday's column, Jack gave us a laundry list of things he hates about flying, taking peculiar aim at pilots, whom he accuses of recklessness and making passengers uncomfortable.

Item No. 7: "Pilots who decide it is more convenient (for them) to utilize the full capacity of the airplane to slow to taxi speed after landing just so they can turn off at an intersection which is closer to the gate."

He's talking about those times when a plane decelerates with unusual vigor in order to make a certain taxiway turnoff. You've probably experienced this: the reversers roar, the brakes groan, and you and your belongings are pitched forward. Jack believes this is more apt to occur when the pilots are in a hurry to get home -- "on their last flight of the day," as he puts it.

Just in case anybody thinks this is really what happens ... it's not.

Sure, we sometimes slow down abruptly in the interest of shorter taxi time. And why not? Who wants to taxi for 20 minutes when you can taxi for five minutes instead? This is particularly common at airports with criss-crossing runways. When practical, pilots will attempt to turn clear prior to the point where runways intersect. Once beyond that point, waiting for clearance to recross an active runway can take several minutes.

Another reason is that air traffic control sometimes needs you to exit a runway as quickly as possible, especially when traffic is close behind and/or waiting to depart.

In no case is the rate of deceleration unsafe. It's can sometimes be a little unnerving, but it is always well within the capabilities of the aircraft and a perfectly acceptable procedure. No pilot will use reckless or extreme braking in the interest of anybody's convenience, yours or his.

Jack, I'm a little offended. Say what you want about airlines and the indignities of flying, but if anybody in this business has the passengers' backs, it's the flight crew.

On touchdown, planes are slowed by a combination of braking, spoiler deployment and reverse thrust.

Spoilers are rectangular panels hinged to the upper surface of the wing. Also called "speedbrakes," they are used in flight to assist with turns and descents, but are also deployed on touchdown. When raised, these panels destroy the wing's lift and effectively "push" the weight of the airplane onto its landing gear. The brakes then take over and provide most of the stopping power.

Initial braking is taken care of automatically. Prior to landing, we dial in a desired "autobrake" setting, which kicks in shortly after touchdown. The choice of setting depends mainly on runway length and surface conditions. The airplane I fly has five levels to pick from, "2" being the most common. At some point during the rollout (it varies), autobrakes are disconnected and the pilot reverts to manual braking. Brakes are applied by depressing the tops of the rudder pedals, not unlike the way one brakes in a car.

Airplane brakes are very powerful. They need to be. A widebody jet touches down at around 150 miles per hour and weighs hundreds of thousands of pounds. That's a lot of momentum. To say nothing of the force required to safely stop a jetliner at maximum gross weight following a high-speed rejected takeoff.

Then you've got reverse thrust. The pilot manually raises a lever -- one for each engine -- that causes deflector panels to lift or slide into place. It's not a true, 180-degree redirection of thrust, but more of an acutely angled, semi-forward vector, like the effect of blowing into your cupped hand. Once the deflectors are positioned, which takes a second or two, engine power is increased as needed. (Turboprop engines reverse as well; the propeller blades twist longitudinally, forcing air forward rather than backward.) Reverse thrust is the noisiest deceleration tool, but actually it's the spoilers and brakes that do most of the work.

Spoiler deployment on landing is usually automatic. We arm the spoilers during descent, and they come up as soon as the gear hits the ground. This is confirmed by a callout from the non-flying pilot -- i.e., the one not performing the landing. "Spoilers deployed," he'll call, or whatever phraseology is taught by that carrier. Should the automatic feature fail for some reason, he'll reach over and take care of it manually, sliding the spoiler lever fully aft.

Deployment of reverse thrust is also confirmed with callouts, as are increments of speed as the plane slows. "One hundred knots," for example.

Stopping distance is always assured. Taking weight, wind and weather into account -- including penalties for a surface slickened by ice, snow or rain -- data must show that a plane can stop within a maximum of 85 percent of the available length.

Obviously, however, shorter runways leave limited margin for error, and history records numerous overrun accidents, some of them fatal. During severe weather things can get squirrelly. Low visibility, gusty crosswinds and slick surfaces can combine to throw an approach off kilter.

The best way -- indeed the correct way -- of dealing with an unstable approach is to break it off and go around.