Does anyone doubt that the abuse is designed to destroy his mental health and will? 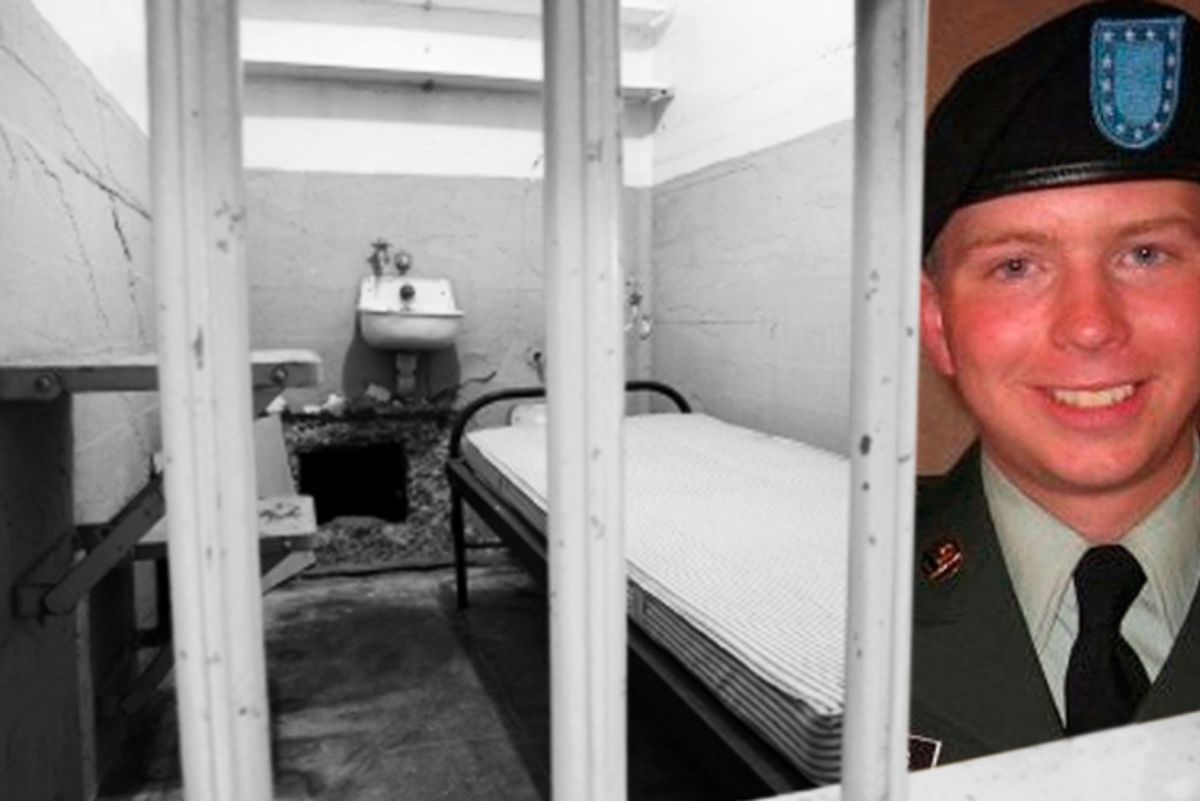 To follow-up on yesterday's observations about the prolonged forced nudity to which Bradley Manning has been subjected the last two days:  brig officials now confirm to The New York Times that Manning will be forced to be nude every night from now on for the indefinite future -- not only when he sleeps, but also when he stands outside his cell for morning inspection along with the other brig detainees.  They claim that it is being done "as a 'precautionary measure' to prevent him from injuring himself."

Has anyone before successfully committed suicide using a pair of briefs -- especially when under constant video and in-person monitoring?  There's no underwear that can be issued that is useless for killing oneself?  And if this is truly such a threat, why isn't he on "suicide watch" (the NYT article confirms he's not)?  And why is this restriction confined to the night; can't he also off himself using his briefs during the day?

Let's review Manning's detention over the last nine straight months:  23-hour/day solitary confinement; barred even from exercising in his cell; one hour total outside his cell per day where he's allowed to walk around in circles in a room alone while shackled, and is returned to his cell the minute he stops walking; forced to respond to guards' inquiries literally every 5 minutes, all day, everyday; and awakened at night each time he is curled up in the corner of his bed or otherwise outside the guards' full view.  Is there anyone who doubts that these measures -- and especially this prolonged forced nudity -- are punitive and designed to further erode his mental health, physical health and will?  As The Guardian reported last year, forced nudity is almost certainly a breach of the Geneva Conventions; the Conventions do not technically apply to Manning, as he is not a prisoner of war, but they certainly establish the minimal protections to which all detainees -- let alone citizens convicted of nothing -- are entitled.

The treatment of Manning is now so repulsive that it even lies beyond what at least some of the most devoted Obama admirers are willing to defend.  For instance, UCLA Professor Mark Kleiman -- who last year hailed Barack Obama as, and I quote, "the greatest moral leader of our lifetime" -- wrote last night:

The United States Army is so concerned about Bradley Manning’s health that it is subjecting him to a regime designed to drive him insane. . . . This is a total disgrace. It shouldn't be happening in this country. You can't be unaware of this, Mr. President. Silence gives consent.

The entire Manning controversy has received substantial media attention.  It's being carried out by the military of which Barack Obama is the Commander-in-Chief.  Yes, the Greatest Moral Leader of Our Lifetime and Nobel Peace Prize winner is well aware of what's being done and obviously has been for quite some time.  It is his administration which is obsessed with destroying and deterring any remnants of whistle-blowing and breaches of the secrecy regime behind which the National Security and Surveillance States function.  This is all perfectly consistent with his actions in office, as painful as that might be for some to accept (The American Prospect, which has fairly consistently criticized Obama's civil liberties abuses, yesterday called the treatment of Manning "torture" and denounced it as a "disgrace").   As former Army officer James Joyner (and emphatic critic of WikiLeaks and Manning) writes:

Obama promised to close Gitmo because he was embarrassed that we were doing this kind of thing to accused terrorists. But he's allowing it to happen to an American soldier under his command?

And I'll say this again:  just fathom the contrived, shrieking uproar from opportunistic Democratic politicians and their loyalists if it had been George Bush and Dick Cheney -- on U.S. soil -- subjecting a whistle-blowing member of the U.S. military to these repressive conditions without being convicted of anything, charging him with a capital offense that statutorily carries the death penalty, and then forcing him to remain nude every night and stand naked for inspection outside his cell.  Feigning concern over detainee abuse for partisan gain is only slightly less repellent than the treatment to which Manning is being subjected.


UPDATE:  Robert Parry, at Consortium News, documents how crucial was forced nudity to the Bush detention and interrogation regime; Marcy Wheeler recalls how Bush-era official documents emphasized the importance of prolonged nudity in breaking down detainees; and in The Guardian, Ryan Gallagher writes about "Bradley Manning and the stench of U.S. hypocrisy."

Today and tomorrow are travel days for me, so posting may be light over the next 24 hours.  As a reminder for those in New Mexico and Texas, I'll be speaking this week at several events which are open to the public; details are here.