A breakdown of the week's biggest breakdown 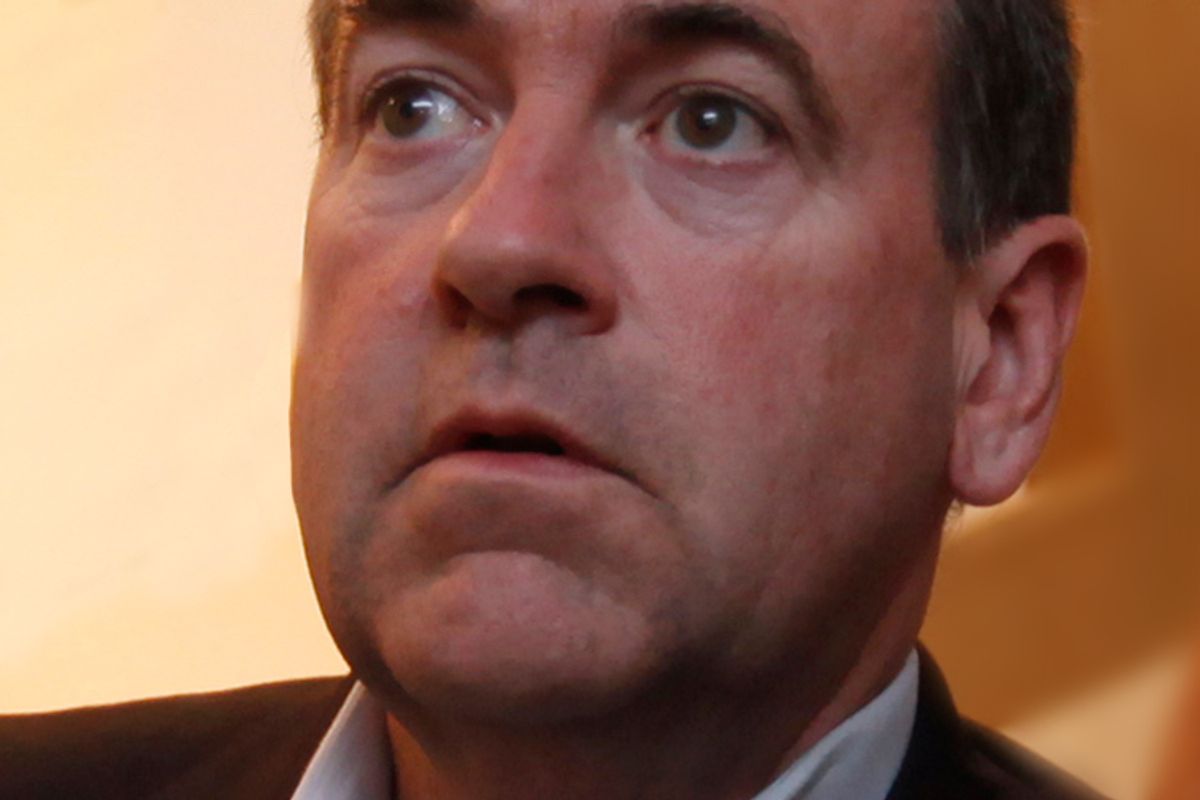 Mike Huckabee has in the past week made two sets of comments that he has had to explain or correct -- and in both cases, the explanations proved just as problematic as the original statements.

We count at least four examples -- all in one week -- of Huckabee saying things that are either factually false or, at the least, extremely unconvincing.

The week started with a radio appearance on the right-wing "Steve Malzberg Show." That's where the former Arkansas governor, who is consistently a leading contender in GOP presidential polls, offered this out-and-out falsehood about President Obama's upbringing:

What I know is troubling enough. And one thing that I do know is his having grown up in Kenya, his view of the Brits, for example, very different than the average American.

On Tuesday, a day later, Huckabee issued a statement on his website saying that, "I simply misspoke when I alluded to President Obama growing up in 'Kenya' and meant to say Indonesia." He took a dig at the New York Times and the AP for reporting the story, adding, "You just can't help but laugh when my simple slip of the tongue becomes a huge story -- and a certain presidential candidate claiming to visit all 57 states, gets widely ignored."

That's a reference to candidate Barack Obama's gaffe about visiting "57 states" during the 2008 campaign -- a story that's frequently cited in the conservative blogosphere. But is it accurate that Huckabee's statement about Kenya was a "simple slip of the tongue"? Not if you actually read his full remarks. Here is the exchange (a longer dissection of which you can read here):

MALZBERG: Don't you think we deserve to know more about this man?

HUCKABEE: I would love to know more. What I know is troubling enough. And one thing that I do know is his having grown up in Kenya, his view of the Brits, for example, very different than the average American. When he gave the bust back to the Brits --

HUCKABEE: The bust of Winston Churchill, a great insult to the British. But then if you think about it, his perspective as growing up in Kenya with a Kenyan father and grandfather, their view of the Mau Mau Revolution in Kenya is very different than ours because he probably grew up hearing that the British were a bunch of imperialists who persecuted his grandfather.

So there you have it. Huckabee actually said twice that Obama grew up in Kenya, which is part of Huckabee's theory about Obama's view of the Mau Mau revolution -- which happened, of course, in Kenya, not Indonesia. His line of argument does not make sense if you simply replace "Kenya" with "Indonesia."

But the saga of the Mau Mau quote doesn't end there. On Wednesday, Huckabee appeared on the O'Reilly Factor to talk about the episode. There, Huckabee again lashed out at the "left-wing media" and said, "if I'd read from my own text, page 183 of my book, I clearly said he grew up in Indonesia."

Media Matters subsequently bought his book and checked out page 183. And, contra Huckabee, there's no mention of Obama having grown up in Indonesia on that page -- or anywhere else in the book.

Just as the uproar over Huckabee's Kenya comments was dying down, it emerged that he had, in another radio appearance, attacked the pregnant actress Natalie Portman for glamorizing the idea of having children outside of marriage. Again, an uproar ensued. And again, Huckabee let loose an unconvincing attack on the media.

[C]ontrary to what the Hollywood media reported, I did not "slam" or "attack" Natalie Portman, nor did I criticize the hardworking single mothers in our country. My comments were about the statistical reality that most single moms are very poor, under-educated, can't get a job, and if it weren't for government assistance, their kids would be starving to death.

So, is it true that Huckabee did not attack Portman? Here are his original comments:

You know Michael, one of the things that's troubling is that people see a Natalie Portman or some other Hollywood starlet who boasts of, 'Hey look, you know, we're having children, we're not married, but we're having these children, and they're doing just fine.' But there aren't really a lot of single moms out there who are making millions of dollars every year for being in a movie. And I think it gives a distorted image that yes, not everybody hires nannies, and caretakers, and nurses. Most single moms are very poor, uneducated, can't get a job, and if it weren't for government assistance, their kids would be starving to death and never have health care. And that's the story that we're not seeing, and it's unfortunate that we glorify and glamorize the idea of out of children wedlock.

It seems pretty clear: Huckabee says it's "troubling" that Portman "boasts" of having kids out of wedlock, and that's part of a negative trend of glamorizing such pregnancies. How is that not criticism?

The real question we're left with is whether Huckabee is simply being incredibly sloppy or, as Greg Sargent argues, deliberately blowing the dog-whistle in order to endear himself to social conservatives.