Is there any member of Donald Trump's "elite" cast who hasn't already tarnished their name on unscripted shows? 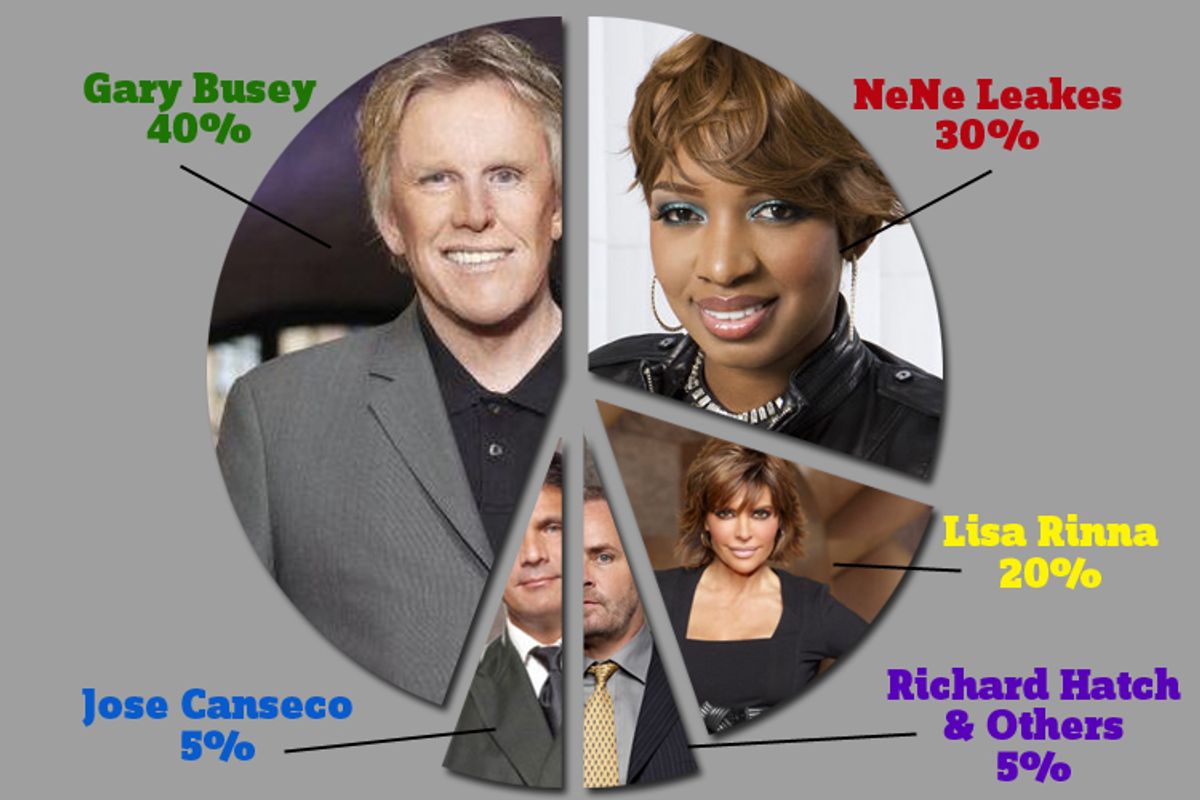 A pie-chart percentage of how much reality TV has been performed by members of Donald Trump's latest cast.
--

The 11th season of Donald Trump's high-octane business show "The Apprentice" returned last night on NBC. Of course, "The Apprentice" is now only known as "Celebrity Apprentice," since Donald realized that after season one's contestant Omarosa that he'd get much better ratings with crazy divas than he'd ever get with normal, everyday folks who actually had some business sense.

He was half right: "Celebrity Apprentice" had terrible ratings compared to its predecessor, but its fan base of bloggers and other "we're laughing at you" types who tuned in to look at the reality show train wrecks turned out to be more than enough to carry a show with inter-program advertising techniques. And last season's win by Bret Michaels, who had just suffered from a massive subarachnoid hemorrhage, became a feel-good storyline that overshadowed Trump's infamous "You're Fired!" catchphrase and managed to bring audiences back.

But the word "celebrity" sure is losing its punch these days. "Celebrity" doesn't refer to anyone you'll see at awards shows or even working in the entertainment industry as a professional. Instead "celebrity" is now a synonym for anyone on the reality television and/or game show circuit, whether that's a washed-up singer, an actress you haven't seen in 20 years, or someone Dr. Drew has taken an interest in.

Lets take a look at the lineup for "Celebrity Apprentice," season 11. You'll notice that only contestants Lil Jon, Dionne Warwick, and David Cassidy have not hosted, starred-in, or spent time as a guest judge on any reality program or game show:

Gary Busey: The king of reality TV with titles such as "Celebrity Fit Club 2," "Celebrity Rehab with Dr. Drew," "I'm With Busey" (which was only pretending to be a reality TV show), "Celebrity Paranormal Project," among others.

Richard Hatch: First winner of "Survivor," lost on "Survivor: All-Stars," lost on "Battle of the Network Reality Stars," and the reality-show edition of "Dog Eat Dog."

Jose Canseco: Former cast member of "The Surreal Life" on VH1, has appeared on "Kathy Griffin: My Life on the D-List" and "The Big Idea with Donny Deutsch."

Marlee Matlin: "Dancing With the Stars" contestant, had a viral launch of her reality pilot "My Deaf Family."

Hope Dworaczyk: Host of "Inside Fashion" on Canada's E! channel, former cast member of Playboy's "The Girls Next Door" show.

David Cassidy, by the way, was booted out on the first episode, leaving only Dionne Warwick and Lil Jon to be considered actual celebrity-celebrities. Then again, if you consider that most young adults know Dionne not from her "Santa Fe" days but as a psychic with her own infomercial and one of the stars of "Solid Gold" (which conceptually, might be considered an early adopter of the reality show format), the concept of "celebrity" may just drop another notch or two.

Looks like Lil Jon is the only legitimate celebrity left on "Celebrity Apprentice." And that's just sad. Yeah!