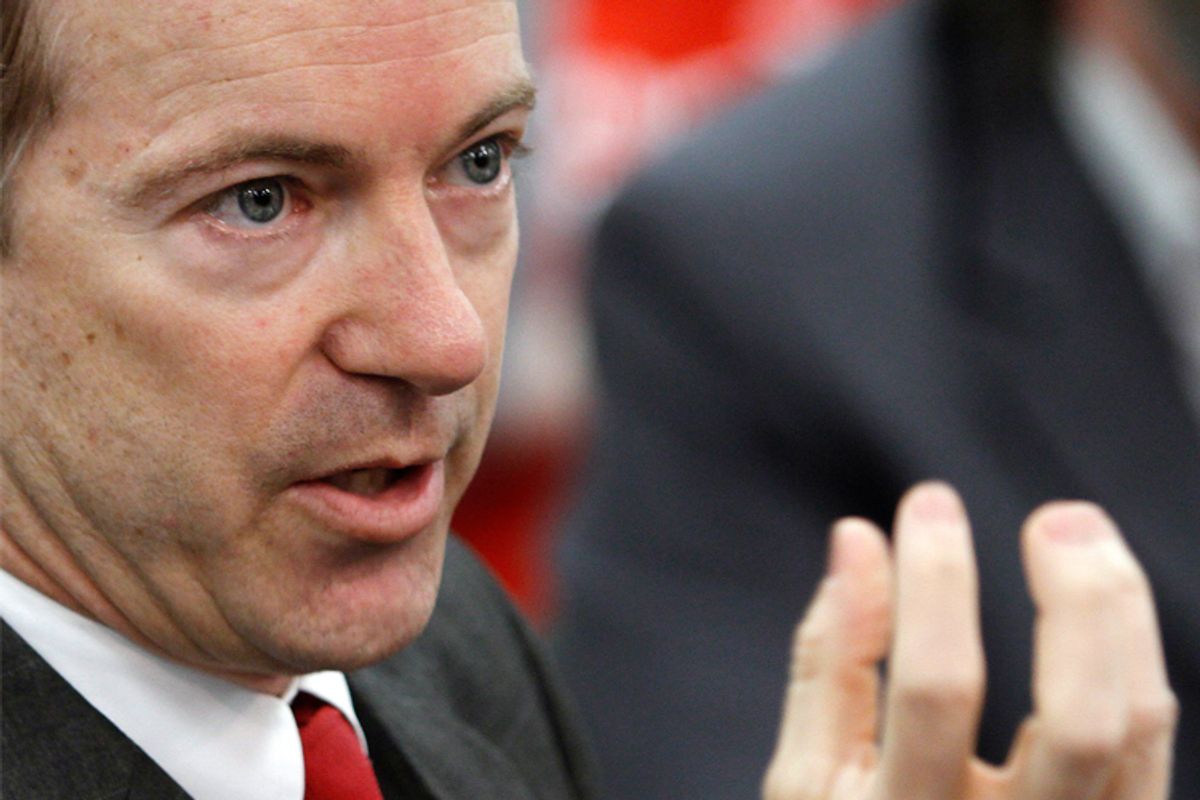 If there was one form of disastrous pollution you would think everyone would readily agree the Environmental Protection Agency should regulate, it would be mountaintop removal coal mining. It's hard to think of a modern industrial practice that does more damage than the one that blows up the top of mountains, fills up stream beds and valleys, and poisons the local water supply.

But today's Republican Party disagrees. Last Thursday, the two Republican senators from Kentucky, Mitch McConnell and Rand Paul, introduced a bill aiming to restrict the EPA from clamping down on mountaintop removal.

"I think this is a good first step to reining in an out-of-control, unelected bureaucracy. I think the EPA has gone way beyond its mandated duty and is now at the point of stifling industry in our country," Paul said Thursday.

The bill would give EPA a 60-day deadline to veto Clean Water Act permits issued by the U.S. Army Corps of Engineers, or else they will go forward.

Pretty clever. Those bureaucrats move pretty slow, you know, what with the time it takes to do environmental impact assessments and whatnot. They'll never get their work done in 60 days or less. Brilliant!

The coal industry is upset at the EPA for quashing the huge Spruce No. 1 mine in West Virginia. Paul, who made some waves during his campaign for senator when he characterized the deaths of 29 coal miners at Massey Energy's Upper Big Branch mine as an example of the "accidents and unfortunate things that do happen no matter what the regulations are," is exactly the kind of libertarian senator that most big polluters dream of. But the ironic, or ridiculous, part of his "good first step" statement is of course the fact that the action taken by the EPA's "unelected bureaucracy" was the clear result of an election.

Bush's EPA was instructed to lay off the coal mining industry. Obama's EPA came in with a different mandate, as a consequence of a Democratic candidate winning a presidential election. What Rand Paul is really trying to do with his new law is overturn the will of the people! Where's the outrage?

In related news, is it time to ban use of the word "overreach"? If it isn't Wisconsin's governor, Scott Walker, "overreaching" in his attack on public-sector collective bargaining rights, or the Wall Street Journal "overreaching" when it reported that Wisconsin's Democratic senators were ready to give up, we now have Sen. McConnell declaring that "an overreaching Environmental Protection Agency in Washington is blocking new jobs for Kentuckians and Americans by waging a literal war on coal."

Literally? I think McConnell may be guilty of some metaphorical overreach.