The majority of my students will have a hard time "making it." Sometimes I wonder: Should they be in school at all? 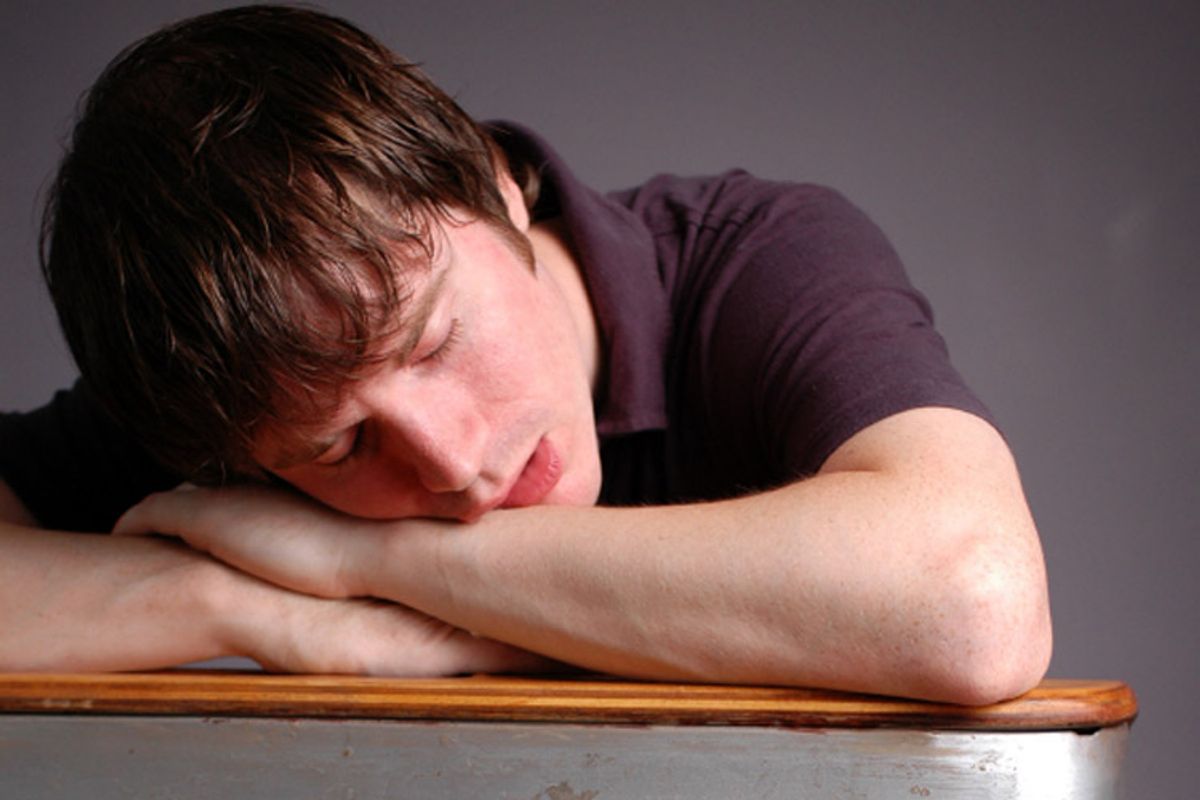 "Stand up if you have ever been told that you weren't college material," the school president booms during the commencement ceremony.

In answer to his question, dozens of students stand and pump their fists; cheers go up; an air horn blasts. He goes on:

"Now, stand if you are the first member of your family to go to college."

"Stand if you started your degree more than 10 years ago," and then the president tells them to stay standing as he ticks off intervals of time, "Fifteen years? Twenty years? Twenty-five years?"

It's a familiar shtick, the engaging audience-participation-enhanced introduction to the congratulatory speech he will make about our community college: the school where success begins. Where no matter what you have been told about your academic fitness, no matter whether you grew up in the ghetto or in the suburbs, no matter whether you are fresh out of high school or returning to college after raising your own children, you can make it! Cheers. Wild applause. Air horns.

The speaker last year was one of my former students whose success was a narrative that the administration told at every possible opportunity: Displaced worker reinvents himself, does good work in the community, wins national recognition. He was the darling of the college. He was a great guy who deserved every bit of the praise. He was someone I could look at and say, "This is why I am a teacher." Hearing him speak at commencement was a double dose of affirmation, proof that I am -- that we are -- doing good in the world.

I wish it were always that simple.

My school is in a culturally and economically challenged city: a military town that sits uncomfortably at the junction of the Rust Belt and the Bible Belt. In any given class, there might be a handful of displaced workers, some first-generation college students, a couple of immigrants, one or two recovering addicts, half a dozen young slackers, and as many industrious self-starters. Maybe there are some pissed-off 18-year-olds who would rather be drinking beer far from home but whose parents suddenly can't afford the party school education they'd envisioned. And another couple of 19-year-olds who drank themselves onto academic probation and wound up here as the result of an elaborate grounding: "No more school for you, son." They have been sentenced, instead, to community college. It is, in short, a mixed bag.

We love our success stories, but most of the numbers prove that these are merely anecdotal evidence. We have about 25,000 enrollees most quarters. Only 10 percent of our first-time, full-time students complete an associate's degree in three years. A little over 15 percent transfer elsewhere to complete four-year degrees. The five-year completion rate is better, but no matter what we do, the majority of students who start classes in any given academic year will drop out, either temporarily or permanently, for reasons that are far, far beyond our control.

It's a dirty little secret. We talk about statistics and metrics and definitions of completion and success. We have meetings and brainstorm about safety nets. We conduct surveys, collect data, and intervene early and often. We mentor and we hand-hold. We counsel and we nurture. But still, they fail. We like to call it non-completion. But no matter how we look at the numbers, we can't deny that a significant number of them simply fail. It's an ugly word.

For many of them, why they fail is not a question of talent, or even basic skills. It's a question so complicated as to be nearly unanswerable. Sometimes, they just don't want or need what we can provide.

Caleb was one of the most talented writers I've ever had in class. He didn't think of himself as a writer. He didn't even particularly enjoy writing, that I remember. Mine was a required composition class, not an elective. But he wrote these gorgeously constructed sentences, saw the world with a keen and sardonic eye. He had absolutely no idea how good he was, and I had absolutely no idea what to do with him in that context. I just kept giving him A's and urging him to write more.

A couple of years later, I saw him again -- in a tattoo shop, scratching the silhouette of Icarus into my husband's right arm. It took me a few minutes to place him, but when I mentioned that I remembered him, he seemed apologetic.

But clearly, tattooing was. His writing portfolio probably hit the recycling bin the minute he walked out of my classroom, but his ink on my husband's deltoid is the last thing I see most nights as I fall asleep.

I have relayed this anecdote to mixed responses. Some people remark about what a shame it is that he didn't finish his degree. Some want to know why I didn't ask him if he was still writing. Even I wonder if being a tattoo artist is a sustainable terminal career goal. But the same could be said about writing, couldn't it? Caleb was creating art. As he did so, he told us about his little girl and how he was trying to make a life for her. Why would I presume to ask him to do that any other way?

Our national fervor over college is based on a couple of false premises. One is that everything worth doing is only possible with education, not the education that experience gives us, but the kind that is acquired sitting in a classroom, paying tuition and spending exorbitant sums on textbooks.

The other is much more profound and troubling: that with the right support (the financial aid, the grants, the scholarships, the tutoring, the early intervention, the developmental courses, the disability services, the right counseling, the list goes on and on) anyone can get a college degree. It's patently false.

When a student tells you her goal is to do better for her family, but comes to class one day with a black eye and then disappears for the rest of the quarter, you have to wonder if her abusive husband didn't have some say in her quitting school. When another student kicks an addiction, does time and tries to start over, but winds up pregnant and having to take a quarter off, you can't shout at her about birth control and her self-destructive habit of sleeping with losers. When they can't come to class because they don't have gas money or can't afford to pay for parking, you can't hand them a 20. When their parents age, when their kids get sick, when they get evicted, when their cars break down, you can offer sympathy, extend deadlines and cheerlead. But sometimes, the safety nets fail. The bootstraps break. There's nothing anyone can do.

If I didn't think that community colleges could save plenty of people, I could not do my job. But I don't think they can save everyone, and I don't think that everyone is in need of salvation. They are expected to fill an enormous void in our culture and in our educational system, to bridge a gap that in many cases seems unbridgeable, to break down barriers of race and class. And at their best, they do every bit of that.

An acquaintance who teaches at the nearby private university once asked me if I'd like to trade my tenure and my associate professorship for a crappy adjunct job at a four-year institution, as though any university position were better than what I do. Many people ask me how I do it -- how I handle all of the challenges of dealing with a sometimes difficult, frequently underprepared and often (as we like to call it) "at risk" student body. And the frank answer is that I don't. I don't always "do it." I don't always have the patience or the time these students need, but I do what I can. Sometimes the best kind of doing is just teaching.

In his last State of the Union address, Obama trotted out community colleges once again as the great hope. The place where "every American" can have access to an affordable, quality education. Access isn't completion. Completion isn't success. As much as we tell ourselves otherwise, college isn't for everyone. Safety nets fail. Bootstraps break.

But the beauty is, sometimes they don't.