Meet Carlos Slim: The richest man in the world 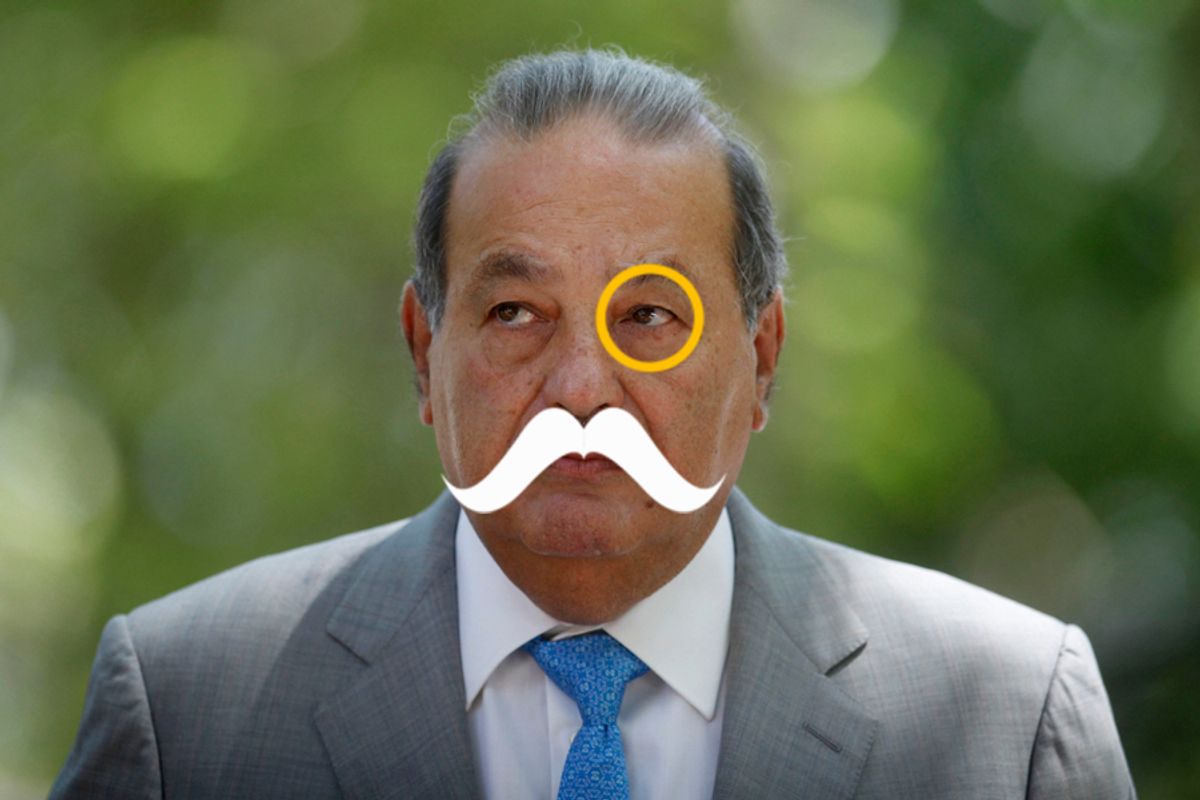 Forbes' annual list of the world's billionaires is due out tomorrow. A year ago Carlos Slim topped the list of the world's richest men, trumping Bill Gates. According to David Lincoln, director of global valuations at a wealth research firm Wealth-X, Slim will win again -- but almost out of a technicality. Had Gates not given away a third of his wealth to charity, Slim would be sitting in the No. 2 slot, just ahead of Warren Buffett. "It wouldn't be a competition," Lincoln told Reuters. "[Gates] would have a comfortable margin if he had never discovered philanthropy."

But who is Carlos Slim and how did he get here? Here's a dossier.

Part I. Background
Born to Lebanese immigrants on Jan. 28, 1940, in Mexico City, Carlos Slim Helú opened his first checking account and bought his first shares in a Mexican bank at age 12. The son of a wealthy self-made businessman, Slim applied his forward-thinking business strategies aggressively and, at 25, incorporated the holding company Inversora Bursátil and bought the bottling company Jarritos del Sur. A year later, in 1966, Slim created another holding company Inmobiliaria Carso -- "Car" from Carlos and "So" from Soumaya, the name of the woman he married that same year -- and absorbed Inversora Bursátil. The resulting company would evolve into his multibillion-dollar empire, Grupo Carso SAB. By the age of 26, Slim was already worth $40 million and would devote his life to diversifying his holdings, buying low and reinvesting profits. But also by being extremely wealthy from an early age.

Part II. Business Holdings
Slim owns a little bit lot of everything. According to the Wall Street Journal, you'd be hard-pressed to spend a day in Mexico without putting money in Slim's pocket. His net worth is equivalent to 7 percent of Mexico's GDP. If he had the same stake in the American economy, Slim would be a trillionaire and would own the equivalent of Alcoa, Phillip Morris, Sears, Best Buy, TGIFriday's, Dunkin' Donuts, Marriott, Citibank and JetBlue, according to Foreign Policy's Brian Winter. In short list form, Carlos Slim and Grupo Carso's more than 220 companies include:

Part III. Personal Life
While married to Soumaya Domit from 1967 until her death in 1999, Slim fathered six children. He often speaks of the importance of family and relationships. Like his counterparts at the top of the Forbes list, Slim is famously frugal and has lived in the same six-bedroom house in Mexico City for decades. Despite the danger of kidnappings, Slim reportedly continues to drive himself to work daily.

Slim has been described as a "walking contradiction." The owner of many technology companies, he seldom uses a laptop, preferring paper and pen to a word processor and books to the Internet. (Although when discussing the future of commerce in 2000, he said that "the key is the Internet.")

An avid art collector, Slim funded the Museo Soumaya, a starkly modern art museum in Mexico City that houses much of his collection and has been described as his "masterworks trophy case." In his leisure time, the billionaire enjoys baseball. His favorite team is the richest team: the New York Yankees.

Part IV. Known Accomplice
Slim attributes his occasionally psychic-seeming ability to predict market changes to the writings of futurist and personal friend Alvin Toffler. (Among Toffler's many contributions to the world is his notion of "techno rebels," a term that inspired electronic music pioneer Juan Atkins to name a new genre emerging out of Detroit in the early '80s "techno.")

Part V. Future Plans
Slim says he has no plans to give his fortune away to charity; he claims it's bad for the global economy. Business can solve global problems better than charities, Slim argued in a recent interview, and the tax deductions that come with donations rob governments of revenue. Slim also has no plans to leave Mexico City for a more exotic location or to sell off his holdings to retire. As his businesses are family-run, many expect him to bequeath his empire.