Christians and Muslims, men and women clash in Egypt's capital 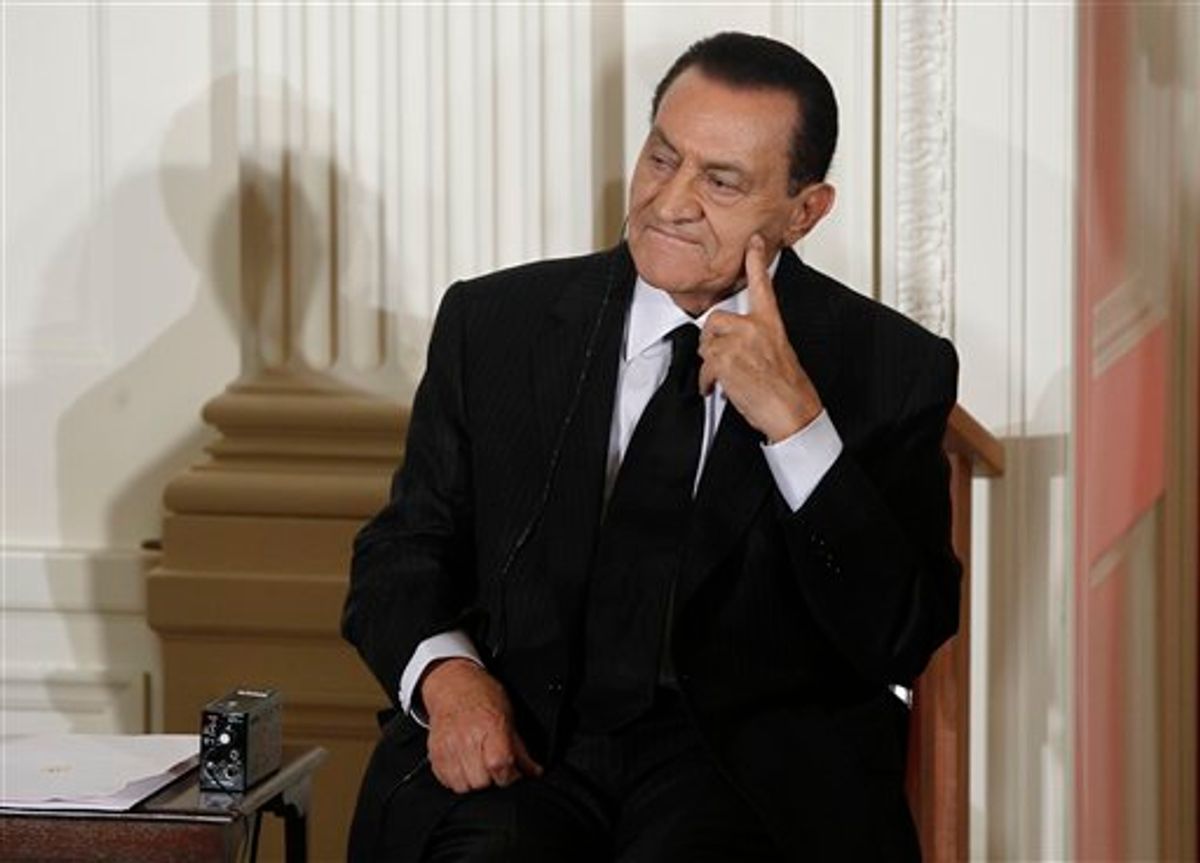 FILE - In this Wednesday, Sept. 1, 2010 file photo, Egypt's President Hosni Mubarak listens as Israel's Prime Minister Benjamin Nethanyahu speaks in the East Room of the White House in Washington. A court on Tuesday March 8, 2011 rejected an appeal by ousted President Hosni Mubarak and his family against an order by the country's top prosecutor to seize their funds, judicial officials said. (AP Photo/Charles Dharapak, File) (AP)
--

Clashes between Christians and Muslims have escalated in a day of violent protests in Egypt's capital.

Soldiers fired shots in the air to break up the clashes that broke out south of the capital while people burned tires and smashed parked cars.

Earlier Tuesday, thousands of Christians demonstrated in two other Cairo locations against perceived persecution by the country's Muslim majority.

Hundreds of Egyptian women demanding equal rights and an end to sexual harassment also were confronted by men who verbally abused and shoved them in a separate protest on Cairo's central Tahrir Square.

Tensions remain high nearly a month after mass protests ousted President Hosni Mubarak and protests are being fueled by the recent indication that Mubarak amassed a large fortune during his reign.

An Egyptian court on Tuesday rejected an appeal by ousted President Hosni Mubarak and his family against a top prosecutor's move to seize funds that could total in the billions of dollars.

The decision clears the way for a criminal investigation and a possible trial of Egypt's ousted leader.

Mubarak stepped down Feb. 11 at the end of 18 days of massive protests demanding his ouster after nearly 30 years in power. He, his wife, two sons and their wives have also been banned from travel abroad.

Judicial officials described the court decision to The Associated Press on condition of anonymity because they were not authorized to speak to the media.

There are no official figures on the funds held by Mubarak and his family but many believe they run into the billions, with much of it held overseas.

The officials said presiding judge Makram Awad rejected a defense request for more time to prepare the defense and decided instead to reject the appeal. The opposition that ousted Mubarak has pushed for a criminal investigation and a possible trial for members or all of the family. Prosecutors' actions suggest that they would be willing to pursue that course of action.

Mubarak's ouster has plunged many parts of the country into turmoil, with virtually incessant protests, strikes and a higher rate of violent crime.

Thousands of Egyptian Christians demonstrated in two Cairo locations Tuesday against perceived persecution by the country's Muslim majority. About 2,000 of them cut off a main road running on the eastern side of the city and pelted motorists with rocks.

Another crowd of about 1,000 protested outside the TV building in downtwon Cairo.

The Christians have been angered by last week's burning by a Muslim mob of a church in a Cairo suburb. Egypt's military rulers have since pledged to rebuild the church and Prime Minister Essam Sharaf met Monday with the protesters outside the TV building.

Egypt's attorney general froze the assets of the Mubaraks on Feb. 20 and ordered the family's funds seized eight days later. Authorities also prevented Mubarak's wife and son from flying out of the Red Sea resort of Sharm el-Sheikh, where they are thought to be staying.

During the pro-democracy uprising, unconfirmed reports that Mubarak and his family might have amassed billions, or even tens of billions of dollars, over their three decades in power, fueled protesters already enraged over massive corruption and poverty in Egypt.

Mubarak, top leaders of his one-time ruling party and other cronies, as well as the powerful military have all profited richly from the corrupt system while nearly half of Egypt's 80 million people live under or near the poverty line set by the World bank at $2 a day.

Mubarak, 82, is suspected of turning a blind eye to corruption by family members and their associates, while many of the allegations of wrongdoing centered on the business activity of his two sons, Alaa and Gamal, as well as Gamal's wife and her family.

Unlike other Arab leaders, particularly those in the oil-rich Gulf nations, Mubarak was far from ostentatious. Whatever wealth he and his family may have had was rarely -- if ever -- flaunted. But that did not stop Egyptians from swapping stories about the size of their wealth and the alledgedly corrupt methods they used to amass it.

The most prominent symbol of their presumed fortune that has surfaced was a townhouse in London's exclusive Knightsbridge district, which is listed under Gamal Mubarak's name and where he was said to have lived while working as an investment banker in the early 1990s. The townhouse has become a focal point for many in Egypt as foreign governments begin to either enact, or consider freezing the family's assets.

Gamal Mubarak was the ousted leader's one-time heir apparent, although they never confirmed the plan and remained evasive on the topic almost until the very end. The younger Mubarak rose rapidly through the ranks of his father's National Democratic Party, or NDP, over the past decade to become the country's most powerful politician after the president.

In the NDP, Gamal Mubarak surrounded himself with mega-rich businessmen who sought political careers to promote their business interests. Between them, they introduced far-reaching economic reforms that benefited the businessmen. But any prosperity Egypt ever enjoyed never trickled to the impoverished majority.

Several of those businessmen are now in prison and subject to criminal investigations as the ruling military pushes ahead with a campaign to cleanse the country from the corruption of the ousted regime.

Alaa Mubarak's wealth had been the subject of much speculation well before the political rise of his younger brother. There are allegations that he used the family name to muscle in on profitable enterprises, taking a cut of profits without contributing to the funds invested or work done.