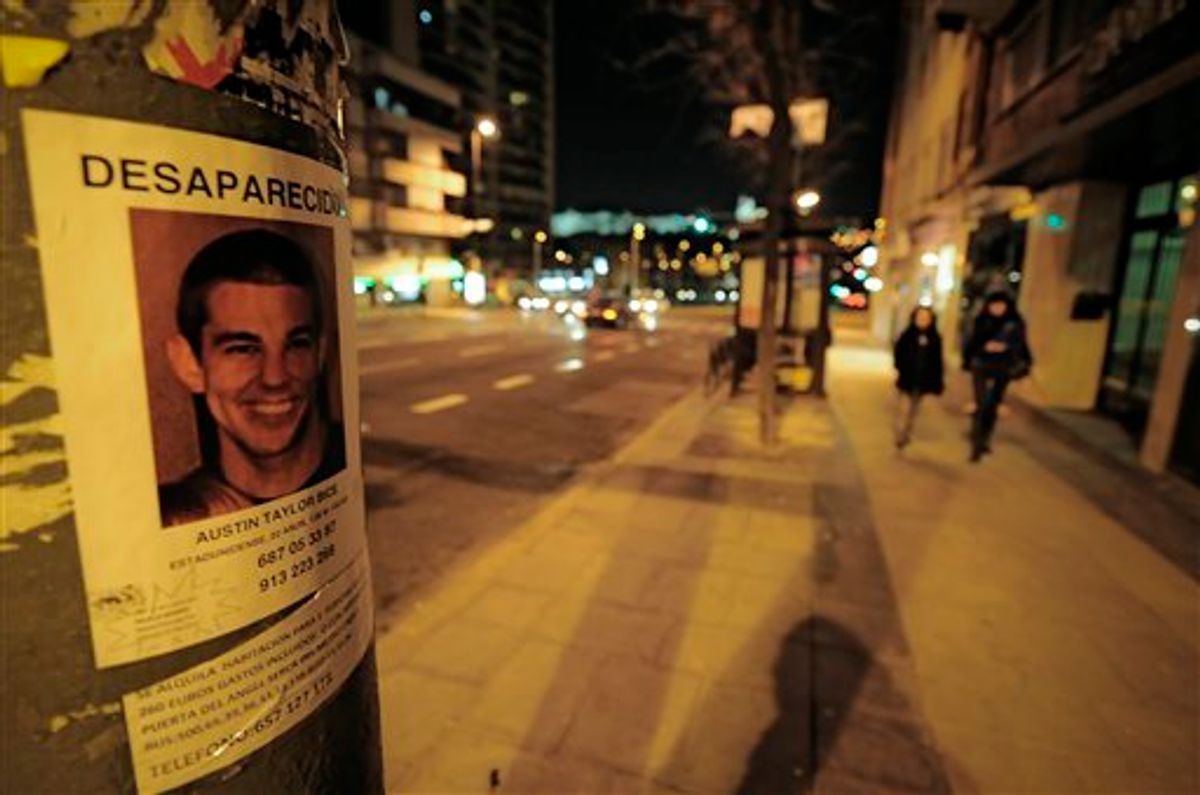 A poster of missing U.S. student Austin Bice, is stuck to a lamp post , near to La Riviera Discotheque, as people walk past on the street in Madrid, Monday March 7, 2011. Police, family and friends have stepped up a search for the San Diego State University exchange student who went missing after visiting a nightclub in Madrid more than a week ago.(AP Photo/Alvaro Barrientos) (AP)
--

The body of a U.S. exchange student from California was pulled out of a Madrid river on Tuesday, 10 days after he went missing following a night on the town, a police official said.

The cause of death was not known but there were no immediate signs of foul play in the death of 22-year-old San Diego State University business student Austin Bice, the National Police official said.

An autopsy will be carried out Tuesday or Wednesday. It is not clear when the results will be released but the information will be given to Bice's family and to a Spanish investigating magistrate, the Madrid government said.

Bice's body was found in the Manzanares River, a shallow, slow-moving waterway that runs through western Madrid, in a spot not far from the nightclub where he was last seen in the early hours of Feb. 26, said the police official.

She spoke on condition of anonymity in line with department rules.

Bice, from Carlsbad, California, was studying international business at Carlos III University and had been in Spain since January. Roommates had reported him missing after he failed to return home following the night out. His father Larry Bice had traveled to Madrid to help in the search.

The body was found after a roughly 500-meter (yard) section of the river, which contains several locks, was drained as part of the search, police said.

After Bice went missing, friends put up posters of him around the city. On Monday night, students in San Diego held a candlelight vigil for him.

Bice's father has said his son was physically fit, tall -- six-foot-four -- and had recently climbed Mt. Whitney in California with him.

Maria Garcia, a friend of Bice's, told The Associated Press over the weekend that Bice and others had been drinking at an apartment before going out to the club. A doorman suggested Bice rest a while before going in because he looked unwell. A friend then stayed outside with him until Bice said he was going to walk home.

On Tuesday, Garcia said she had no idea how Bice had gone missing.

Bice's father did not return a telephone message seeking comment.

Carlos Lopez-Terradas, who runs the exchange program at Carlos III University, described Bice as a popular young man with lots of friends. The university has sent an e-mail to all students and staff informing them of Bice's death, and flags there were flying at half-staff Tuesday in his honor. The university has also contacted Bice's family about holding a memorial ceremony for him in Spain.

"We are crushed. We still cannot believe it," Lopez-Terradas said.

In postings on his blog, Bice wrote about his experience in Spain -- touching on themes ranging from Spanish food, a trip to Valencia, his initial difficulty with Spanish, heavy homework assignments and Madrid's vibrant nightlife.

Bice was amazed at the party scene, with both Spanish and foreign students often staying out until dawn, but said in a Feb. 9 post that he wasn't imbibing as much as others.

"Before I came to Spain, I was told by all of my advisers that I should try to keep calm at parties and not try to be the typical loud and drunk American," Bice wrote. "I have done exactly that, staying back and watching hilarious drunken events occur from a relatively sober mind. The Spaniards at the party were not following along with this ideology."

On his last post on Feb. 25, he said he was going out: "Hopefully it will not disappoint (I assume it will not). It's in Madrid and it should be a fun night."

He added: "Now, I truly must be going, my Spanish roommates are expecting me to prepare some authentic American food ... Hope they like Hamburgers!"

Ciaran Giles and Alan Clendenning in Madrid contributed to this report.