The birth of the People's Party

In Wisconsin and elsewhere, average Americans are finally standing up to demand a fair shake 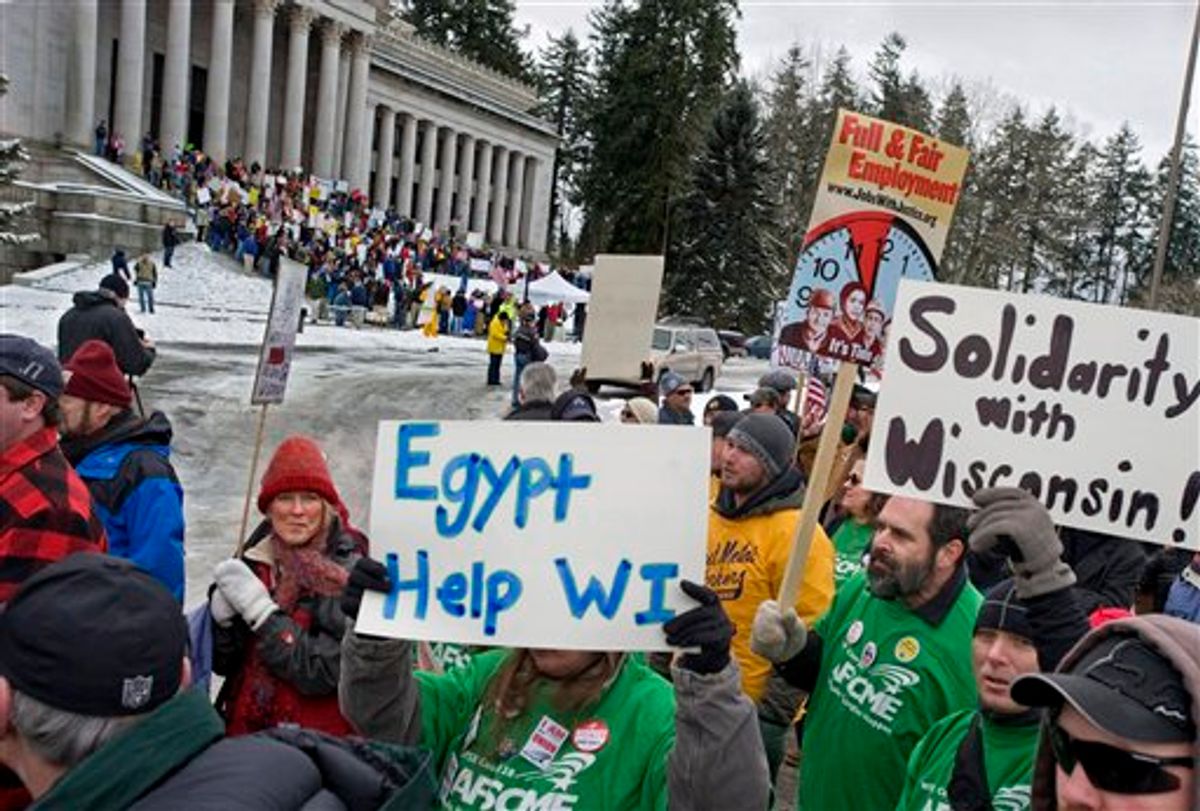 Hundreds of pro-labor union demonstrate across the street from protesters against unions and in favor of the effort to end the collective bargaining for Wisconsin government on Saturday, Feb. 26, 2011 in Olympia, Wash. From unionized firefighters to tea party supporters, two raucous competing rallies over the union fight in Wisconsin drew more than 2,000 people to Washington state's capital despite freezing temperatures Saturday. (AP Photo/The News Tribune, Peter Haley) (AP)
--

Look at the outrage in Madison, Wisconsin. Look at the crowds in Des Moines, Iowa. Look at the demonstrations in Indiana and Ohio and elswhere around America.

Hear what they're saying: Stop attacking unions. Stop making scapegoats out of public employees. Stop protecting the super-rich from paying their fair share of the taxes needed to keep our schools running.

Are we finally seeing average Americans stand up and demand a fair shake in an economy now grotesquely tilted toward the wealthy and the privileged? Are Americans beginning to awake to the fact that our economy now delivers a larger share of total income to the very top than at any time in living memory? That big corporations are making more money and creating more jobs abroad than in the United States?

That this concentration of income and wealth has so corrupted politics that corporations can extort whatever they want from the government -- tax breaks, loan guarantees, subsidies -- while the super-rich can take most of their income as capital gains (taxed at 15 percent), and the rest at the lowest top rate in 25 years? And that because of this our kids are crowded into classrooms, our streets and highways and bridges are falling apart, and our healthcare bills are out of control?

The Tea Party grew out of indignation over the Wall Street bailout -- an indignation shared by the vast majority of Americans. But the Tea Party ended up directing its ire at government rather than at big business and Wall Street. Was this because billionaires Charles and David Koch and their like funneled money to the Tea Party through front organizations like Dick Armey's Freedom Works, and thereby co-opted it?

But the People's Party seems to be growing in numbers and in intensity. And it's starting to push elected officials -- first at the state level -- to listen and respond.