Smog in Wyoming worsens due to natural gas drilling

Ozone levels in Wyoming surpass L.A.'s most polluted days, but the haze is a sign of prosperity in the region 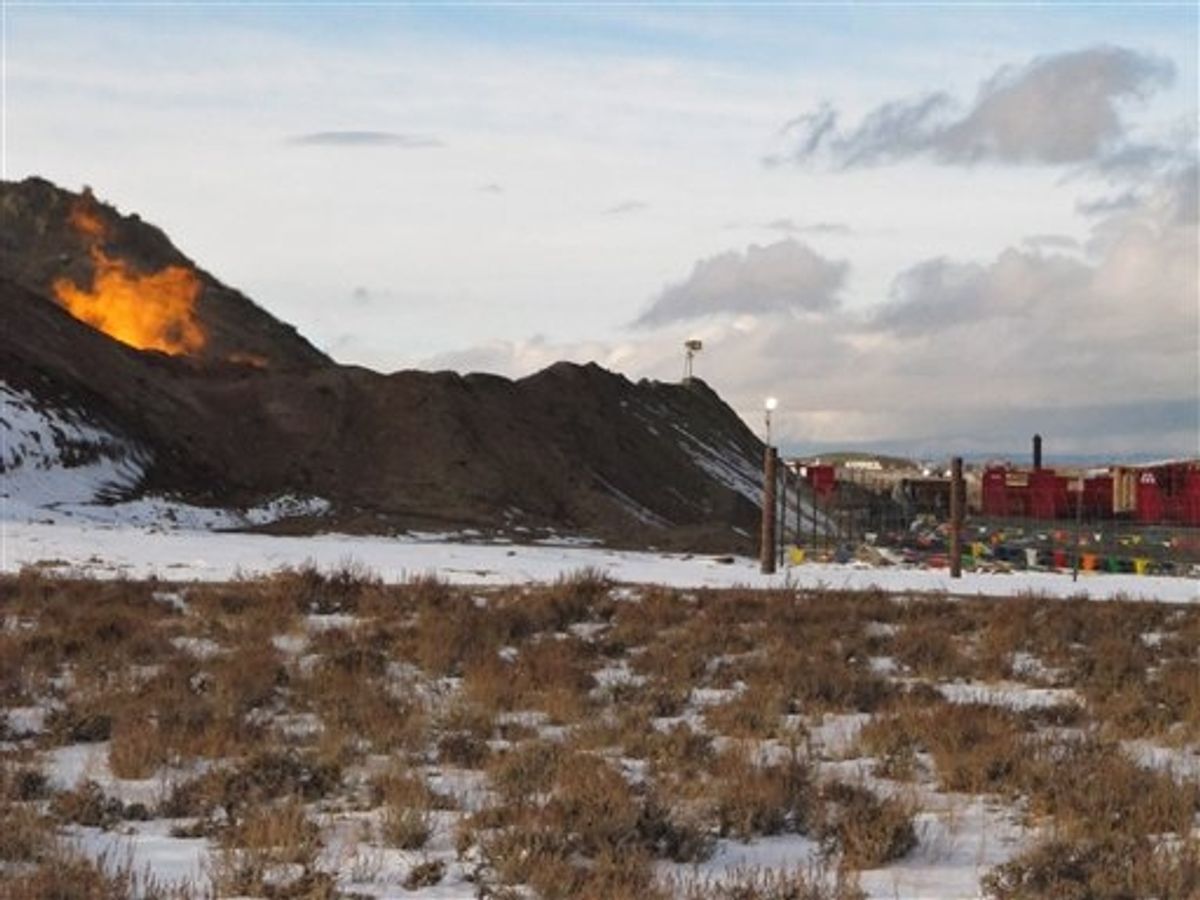 Wyoming, famous for its crisp mountain air and breathtaking, far-as-the-eye-can-see vistas, is looking a lot like smoggy Los Angeles these days because of a boom in natural gas drilling.

Folks who live near the gas fields in the western part of this outdoorsy state are complaining of watery eyes, shortness of breath and bloody noses because of ozone levels that have exceeded what people in L.A. and other major cities wheeze through on their worst pollution days.

"It is scary to me personally. I never would have guessed in a million years you would have that kind of danger here," Debbee Miller, a manager at a Pinedale snowmobile dealership, said Monday.

In many ways, it's a haze of prosperity: Gas drilling is going strong again, and as a result, so is the Cowboy State's economy. Wyoming enjoys one of the nation's lowest unemployment rates, 6.4 percent. And while many other states are running up monumental deficits, lawmakers are projecting a budget surplus of more than $1 billion over the coming year in this state of a half-million people.

Still, in the Upper Green River Basin, where at least one daycare center called off outdoor recess and state officials have urged the elderly to avoid strenuous outdoor activity, some wonder if they've made a bargain with the devil. Two days last week, ozone levels in the gas-rich basin rose above the highest levels recorded in the biggest U.S. cities last year.

"They're trading off health for profit. It's outrageous. We're not a Third World country," said Elaine Crumpley, a retired science teacher who lives just outside Pinedale.

Preliminary data show ozone levels last Wednesday got as high as 124 parts per billion. That's two-thirds higher than the Environmental Protection Agency's maximum healthy limit of 75 parts per billion and above the worst day in Los Angeles all last year, 114 parts per billion, according to EPA records. Ozone levels in the basin reached 116 on March 1 and 104 on Saturday.

The Wyoming Department of Environmental Quality urged the elderly, children and people with respiratory conditions to avoid strenuous or extended activity outdoors.

The Children's Discovery Center in Pinedale set up indoor obstacle courses and turned kids loose on computers instead of letting them out on the playground in the afternoon.

High levels of ozone happen in the Upper Green River Basin only during the winter. They result from a combination of gas industry emissions, snow on the ground, bright sunshine and temperature inversions, in which cool air near the ground is covered by a layer of warmer air. Pollution builds up during the day and becomes visible along the horizon as a thin layer of brown smudge -- smog -- by midafternoon.

People have noticed the air just isn't as clear as it once was.

"It's like maybe when you're not wearing your glasses when you ought to be," said Miller, whose daily commute from her log home includes an eight-mile snowmobile ride just to get to a plowed road.

The gas industry has drilled hundreds of wells in the basin over the past decade and made the basin one of the top gas-producing areas in the U.S.

"Ultimately it comes down to accountability," said Linda Baker, director of the Upper Green River Alliance. "It doesn't seem to me the companies are being very accountable to the residents here." High ozone, she said, gave her a constant nosebleed three days last week.

Crumpley, 68, reported having difficulty on walks and showshoe trips. "You feel a tightness in your chest. You seem to be less able to hold in air. My eyes burn and water constantly, and I've had nosebleed problems," she said.

Drilling of new wells, routine maintenance and gas-field equipment release substances that contribute to ozone pollution, including volatile organic compounds and nitrogen oxides. Last week's ozone alerts weren't the first in the basin -- they also occurred in 2008 and 2009 -- but they were the first in more than two years.

"Shell has taken some meaningful measures to really reduce our measures. Some were voluntary and some were mandatory, but they've resulted in some significant reductions," Sinclair said.

Indeed, gas industry emissions that contribute to ozone pollution, as reported by the petroleum companies themselves, are down by as much as 25 percent in the Upper Green River Basin since 2008, said Keith Guille, spokesman for the Department of Environmental Quality. Gas production in the basin is up 8 percent over that time.

Gov. Matt Mead, state regulators and industry representatives met on Monday to talk about what else companies can do to control pollution.

"We talked about the effectiveness of these contingency plans. We've seen them, they are good. However, we haven't been able to prevent these exceedances," Guille said.

Crumpley said the warnings to stay indoors are hard to take.

"We're all outdoor people here. We don't live inside," she said. "That's why we chose to be here."