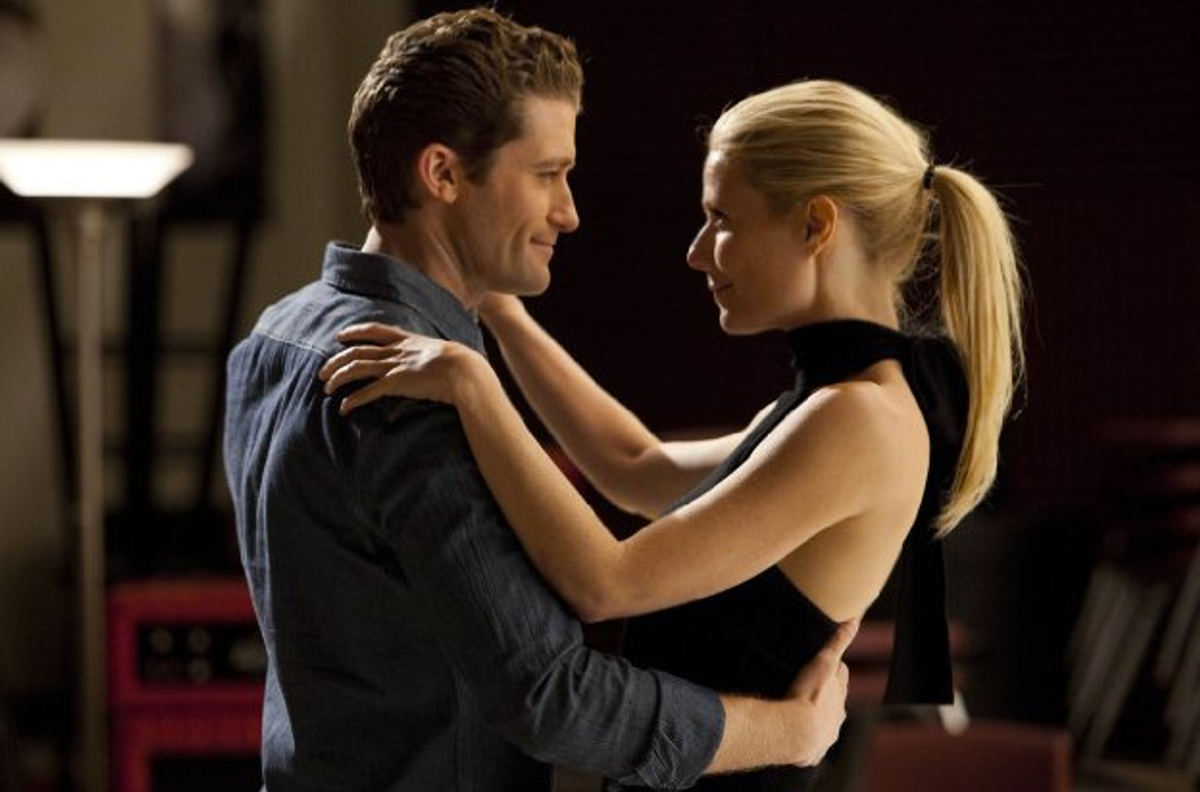 Gwyneth Paltrow returned to "Glee" last night; the rumbling noise you didn't hear was the sound of the earth not stopping on its axis. The episode was a less-charming retread of her appearance last fall, and a reminder that this show is at its best when it's not straining to dazzle us with cutesy-poo campiness and big-name guest stars.

Paltrow's previous appearance was a breath of fresh air because the series has spent much of its second season flailing around madly, trying to figure out if it wants to be an earnest and consistent teen soap with songs or a borderline-surreal Dada-fest where the characters are unrealistic, almost totally arbitrary constructs, and settling for being a C+ version of both. The show's mostly directionless ambition has nearly destroyed any internal logic that the character of glee club coach Will Schuester (Matthew Morrison) had left. Paltrow's first appearance essentially gave Will a week off, and entertained some fans (well, this viewer, for sure) with fantasies that "Glee" might write Will off as damaged goods and start over with a new teacher.

Much to my surprise, the show has sorta, kinda rediscovered Will, and in last week's episode "Blame It on the Alcohol," it made him seem like a plausible human being again and gave Morrison a chance to do something besides look cheerful and vaguely panicked. Built around the glee club's momentary fascination with drinking (yeah, right; as if the wilder characters wouldn't be candidates for intervention in real life!), the hour was one of the series' least flashy and most enjoyable hours: well-constructed, funny and sweet. And it managed to scrutinize the show's flowchart-worthy network of relationships and subplots (including Kurt's mini-melodrama at Gay Hogwarts and the relationship between Kurt and Finn, who are now stepbrothers) without seeming as though it was taking us on a tour of frequently neglected areas of "Glee." I liked the extended basement party with Rachel in her horrendous light-green jammie dress handing out drink tickets and warning the other character not to sit on anything. I liked the so-obvious-they-had-to-do-it follow-up jokes, such as the image of all the glee club kids wearing sunglasses to hide their hangovers. I loved Will and Coach Beiste (Dot-Marie Jones) doing "One Bourbon, One Scotch, One Beer" at the honky-tonk bar and having a laid-back heart-to-heart talk afterward. And I loved the scene where Kurt lambastes Blaine as a wishy-washy beer-goggler for kissing and dating Rachel, and Blaine responds by reminding him that sexuality is fluid, he's still figuring himself out, and he'd like to be allowed to do that without being judged. There were some bum moments, and Sue's ritual humilation of Will was way overdone, as those sorts of scenes almost always are. But all in all the episode was "Glee" at its best, coming perilously close to being all things to all people.

In comparison, last night's "Sexy" couldn't help but seem weak. The episode got off on the wrong foot when Paltrow's substitute teacher character, Holly Holiday, barged into a conversation between glee club coach Will Schuester (Matthew Morrison) and guidance counselor Emma Pillsbury (Jayma Mays, whose character is nearly forgotten for weeks at a time). Something about the timing and attitude of Holly's entrance reminded me of Fonzie on "Happy Days" or Kramer on "Seinfeld" or J.J on "Good Times"; it's as if the show is trying to make her into the sexy version of a so-called breakout character. I like Paltrow as an actress, especially when she's in stylized old-movie mode, but she seemed tired and annoying throughout "Sexy." She was stiff and awkward compared to last time (or maybe the pretty-fly-for-a-white-girl routine only works once), and the material was weaker.

I didn't like that the episode did a virgin/whore juxtaposition of Emma and Holly, not because it's retrograde (this is a highly stylized world filled with archetypes, so that sort of thing is perfectly legit) but because Paltrow is the wrong actress to sell that energy. I buy her as an energetic kook who's not quite like anybody else who ever walked the planet, but I don't buy her as a black-clad spirit of sexiness liberating Will from his self-imposed monkhood. The revelation that she once made a sex tape with J.D. Salinger was as revolting as it was nonsensical. And most of Paltrow's song-and-dance interludes were badly choreographed and poorly thought-out, especially compared to Paltrow's first episode (where she killed "[Forget] You") and "Blame It on the Alcohol," an episode in which every performance worked as both a musical interlude and a story-developing moment.

The hour's only saving graces were Santana's tearful confession of love for Brittany (Naya Rivera's finest moment to date) and the scenes where Kurt's dad, Burt (the superb Mike O'Malley), comes to terms with the physical fact of his son's sexuality. The latter moments worked not because the writing was good (it was mostly godawful, except for the obvious but amusing "Brokeback Mountain" jokes) but because O'Malley is one of the subtlest, most endearing actors on TV.  I didn't buy most of the scenes spotlighting key characters' ignorance of the birds and the bees. They were cheap and unbelievable even by the low credibility threshold of "Glee," though I did like the stupid but funny "Afternoon Delight" number, with its Osmond-family-at-Baskin Robbins production design.

What was the problem? Maybe writer Brad Falchuk and director Ryan Murphy bring out each other's most mannered, annoying impulses (at least compared to Ian Brennan and Eric Stolz, the writer and director of "Blame It on the Alcohol" -- a great team, if what's on-screen is any indication). Or maybe it's that "Glee" had improbably but successfully reawakened Will as a character last week, and needed to refocus him on the school's well-established ongoing dramas rather than drag him into a flirtation with an Oscar-winning guest star. Really, what did Holly explain to Will that Will didn't already know, and had tried to communicate to Emma last season? I'd rather see Will try to liberate Emma again than watch Holly try to liberate Will; the entire relationship is a step backward for the series. On top of that, "Glee" is not committed to Holly (and Paltrow is not commited to ""Glee" because she still has an active film career).  Emma has a consistent character with a history, a sense of place, and some personal stakes; Holly is just visiting and taking up screen time. Lay off the ringers for a while, "Glee." As Coach Beist could have said in the honky-tonk scene last week, dance with the one that brung ya.