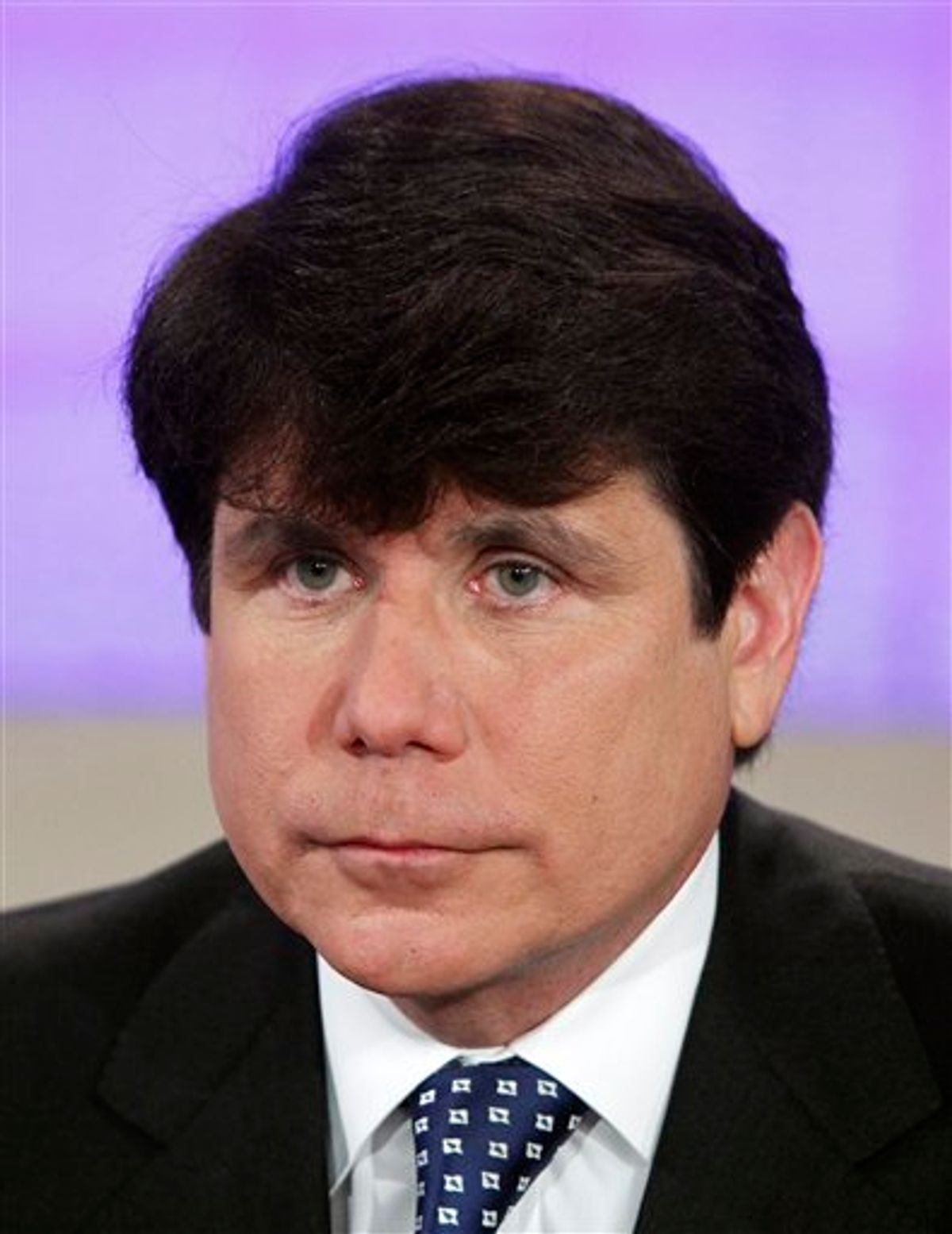 FILE - This file photo provided by NBC shows former Illinois governor Rod Blagojevich on NBC's "Today" show, in New York, on Friday, Aug. 20, 2010. Blagojevich has asked a judge to cancel his spring retrial and immediately sentence him instead on the sole conviction from his first trial. The request comes in a motion filed in U.S. District Court in Chicago early Wednesday March 9, 2011. (AP Photo/NBC, Peter Kramer, File) NO SALES (AP)
--

The impeached former governor of Illinois, Rod Blagojevich, asked a judge on Wednesday to cancel his retrial and promptly sentence him on the sole conviction from his first trial, arguing that money woes prevent him from mounting an ample defense.

A five-page motion filed in U.S. District Court in Chicago insists that Blagojevich isn't conceding any guilt, including on the conviction of lying to the FBI. That's the lone count jurors agreed on at his otherwise deadlocked trial last year.

The motion says the broke ex-governor, whose legal bills are supposed to be paid by the government, wants to forego a retrial on grounds that none of his lawyers have been paid for months of pretrial preparations.

"Should this motion be granted . . . funds for the second trial would no longer be necessary," the motions says. An added bonus, it continues, would be "no further cost to taxpayers."

Blagojevich, 54, faces a maximum five-year prison term for the lying count. It was widely expected that a sentencing date for that conviction would only be set after the retrial was over.

At that trial do-over, currently scheduled to start on April 20, Blagojevich faces 20 charges, including that he sought to sell or trade an appointment to President Barack Obama's vacated U.S. Senate seat in exchange for a top job or campaign cash.

Many of the outstanding charges that would be the focus of a second trial, including fraud and attempted extortion, carry a far stiffer maximum sentence -- 20 years in prison.

Messages left at the U.S. Attorney's office in Chicago early Wednesday were not immediately returned.

Just minutes after jurors at the first trial declared they had hung on all but one count, prosecutors vowed to try the case again. Since then, they have given no hint that they would settle with the one conviction.

Wednesday's motion claims defense attorneys have gone almost nine months without pay and that the dearth of available funds undermines their ability to conduct investigations or seek expert opinions. As a result, it says the defense won't be fully prepared to go to trial on April 20.

"The financial hardship . . . has created a vast inequity," the motion says. "The government continues to have every resource at its disposal. Yet, the defense is stymied in its ability to prepare for trial."

A nearly $3 million fund that Blagojevich drew on at his first trial to pay his team of around a dozen attorneys ran dry as the initial trial finished. Months later, presiding Judge James Zagel ruled that Blagojevich would only be allowed to retain two lawyers and a paralegal on the taxpayer's dime.