The "Bush-tortured" excuse for indefinite detention 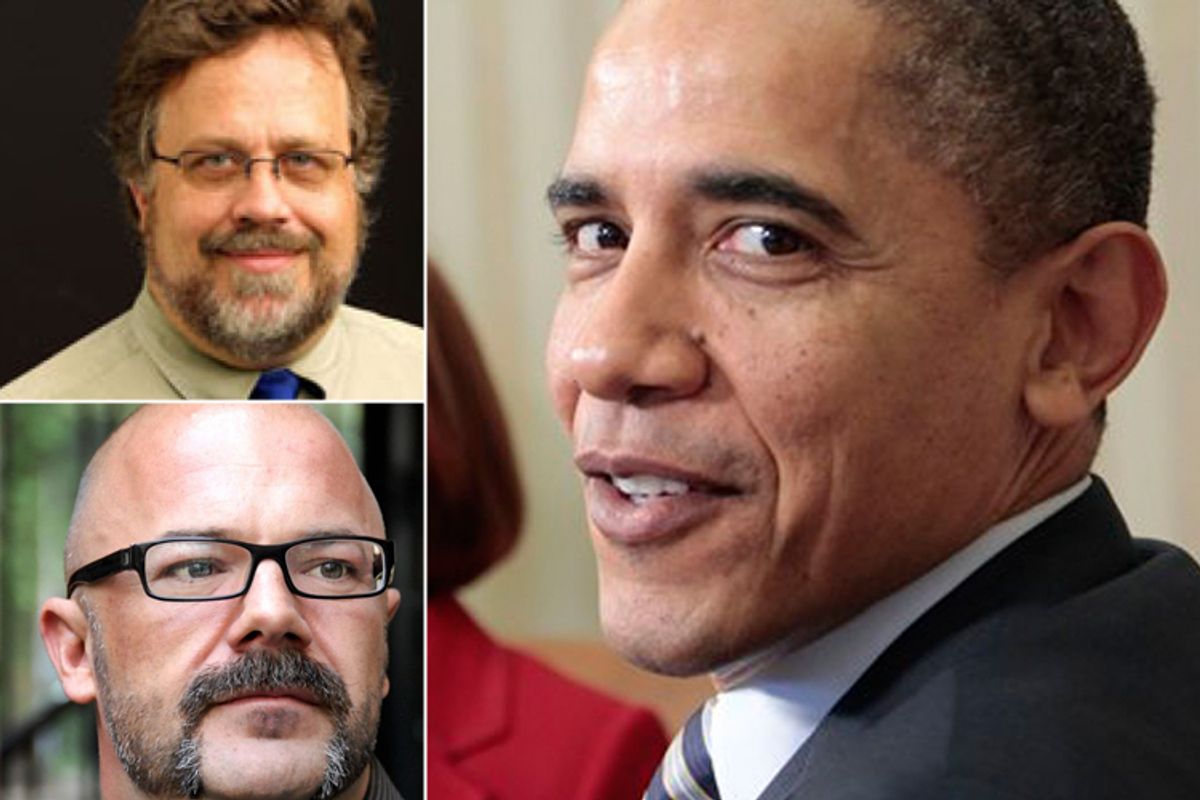 Yesterday, I wrote about the fictitious excuse being offered to justify why Obama is continuing the indefinite detentions and military commissions which defined the Bush/Cheney Guantanamo detention scheme:  it's Congress' fault.  Today we have a new excuse:  it's Bush's fault.  Because Bush tortured some of the detainees, this reasoning goes, Obama is incapable of prosecuting them, yet because many of those detainees are Terrorists and/or Too Dangerous to Release (even though they can't be convicted of anything), he has no real choice but to keep imprisoning them without charges.  Here are the NYT Editors -- even as they criticize Obama's indefinite detention policy -- making this case, one frequently heard from Obama supporters offering excuses for his policy of indefinite detention:

[T]he Obama administration has still chosen to accept the concept of indefinite detention without trial, which represents a stain on American justice. The president made that acceptance clear in a speech in May 2009. To some degree, he was forced into it by the Bush administration's legacy of torture and abuse, which made some important cases impossible to prosecute.

And here's Andrew Sullivan making a somewhat different but related claim, and then going even further, suggesting that the only thing that ever bothered him about Guantanamo was the torture, not the fact that people were being indefinitely imprisoned without a shred of due process:

My fundamental concern has always been humane treatment. When Gitmo was a torture camp, it was indefensible. . . . [Those equating Obama's detention policies with Bush's] omit that the very dilemma - prisoners with no formal charges, no serious evidence, and radicalized by torture and unjust imprisonment - was created by Bush in the first place.  I'd release those against whom there is no credible evidence. But I can understand the security and political concerns of releasing men who could join Jihadists in, say, Yemen.

There's a serious moral flaw in the NYT's reasoning, and two even worse empirical flaws with this excuse-making for indefinite detention.   There are several compelling reasons why the use of torture-obtained evidence is barred by every civilized country for use in prosecution, and has been barred for decades if not centuries.  A primary reason is because the most basic norms of Western morality demand that torture not be rewarded, which is what happens when the fruits of it are admissible in court to prosecute people.  Those who say that Obama is justified in imprisoning people without charges because the evidence against them was obtained via torture and is thus unusable in court are repudiating this long-standing Western moral principle by justifying imprisonment based on evidence obtained by coercion (we know they're guilty because of the evidence we got from torture, so we have to detain them).

But the moral repugnance of this position is even worse than that:  at least people who are prosecuted using torture-obtained evidence have the opportunity to defend themselves in court and to call into question the reliability of that evidence.  But what Obama is doing -- and what some of his supporters are defending -- is to deny detainees even that opportunity. Obama is keeping these people imprisoned without any charges, and then pointing to secret torture-obtained evidence to justify that imprisonment.  He's not even prosecuting them using torture-obtained evidence.  He's going beyond that:  he's imprisoning them without bothering to prosecute them, while his supporters publicly claim that we know they're guilty -- or "dangerous" -- by citing untested, unseen evidence that the government claims can't be used because it was coerced.   Anyone who supports indefinite detention on this ground is doing something much worse than justifying the use of torture-obtained evidence to prosecute someone:  they're justifying imprisonment without trials based on evidence they know -- and which they admit -- was obtained by torture.

If you're someone who wants to claim to find torture repugnant: fine.  But if you simultaneously justify the imprisonment of people based on evidence obtained by torture, then your protestations are meaningless.  Wanting to use evidence obtained by torture is functionally incompatible with claims of finding torture morally unacceptable.  After all, what's the point of barring the use of torture-obtained evidence in trials only to then imprison people anyway without trials based on that very evidence?

Then there are the glaring empirical flaws with this excuse for indefinite detention, i.e., we know they're Dangerous but can't prosecute them because of torture.    Here's the most obvious flaw:  among progressives, liberals and most other critics of the Bush torture regime, the idea that "torture doesn't work" long enjoyed sacred status.  This is what anti-torture advocates claimed over and over and over again:  torture doesn't work because it's unreliable, produces false confessions, causes the person to say whatever they need to say to make the torture stop, etc. etc.

If that's true, then what possible justification is there for assuming that someone is guilty -- that they're a Terrorist who is Too Dangerous To Release -- if the only real evidence against them was obtained via torture?  Doesn't that mean, by definition, that the evidence is unreliable and shouldn't be used to assume their guilt or dangerousness?  And if there is evidence beyond that obtained by torture, then why can't they be prosecuted?

Put another way, with regard to those individuals whom Obama has ordered imprisoned without trials based on the notion that they cannot be prosecuted but are too dangerous to release, only 1 of 2 possibilities exist; either:

What's the way out of that dilemma for those who claim that Obama's indefinite detention order is justifiable because of all the dangerous Terrorists we can't prosecute due to Bush's torture?  This excuse has never made any sense because of this glaring contradiction, and I've been posing this same question for over a year to those defending Obama's indefinite detention scheme on the "blame-Bush's-torture" ground and I could never get an answer.  What is the answer?

Finally, as for Sullivan's claim that there is this some group of detainees against whom there is no "credible evidence" yet who pose a security threat, I'd ask this:  if there's no "credible evidence" against them, then why would he believe that they pose a threat?  Is the idea that because we've abused them and kept them locked up for years without justification, they are now too radicalized and angry to safely release: in other words, because of what we've done to them by unjustly imprisoning them, we have to keep unjustly imprisoning them?  We've unjustly imprisoned you for so long that you now hate us too much to allow us to release you.  Does the warped nature of that reasoning even need to be articulated?

Or is it -- as I suspect -- that Sullivan (even though he wants all such detainees released) is nonetheless willing to believe the government's unproven accusations that certain detainees are dangerous even without (a) knowing what evidence exists to support that accusation, (b) having the evidence presented in a judicial proceeding, and/or (c) being certain that any evidence exists at all?  In light of how many times claims that someone is a Dangerous Terrorist by Bush and Obama haven proven to be false, I genuinely cannot comprehend how anyone is willing to vest in them the power to imprison people without charges.  When one adds the fact that the risk of error is exceptionally high because "combatants" are captured far away from any battlefield and without uniforms, and that the "duration of hostilities" for which they are to be held will be decades rather than years, indefinite detention is one of the great evils of our time.

There is simply no justification -- or excuse -- for locking people away without charges or any opportunity to contest the validity of the accusations against them (the habeas right which the Supreme Court finally granted in 2008 is a far cry from a real trial and, in any event, is being denied to all detainees at Bagram).  That's why those who attempt to justify indefinite detention -- whether done by Bush or Obama -- find themselves wallowing in such intense moral and logical quandaries as these: because they're trying to defend the indefensible (not to mention the illegal).

On the night of April 28, I'll be speaking in New York, along with Noam Chomsky and Amy Goodman, for an event sponsored by (and for the benefit of) FAIR.  Tickets are expected to be sold out quickly, so those interested in attending can arrange to do so here.  And, as a reminder for those in Houston, I'll be speaking tonight at this event, open to the public [link fixed].

UPDATE (Thurs.):  Several commenters point out, reasonably, that there is an additional possibility beyond the two I identified:  namely, that torturing a detainee -- in addition to provoking unreliable confessions -- can also lead to the discovery of incriminating evidence which is reliable and independently verifiable, and that the use of such reliable evidence would also be barred as "fruit from the poisonous tree."  I seriously doubt -- and would like to see evidence to support -- the notion that this has happened frequently, or anywhere near frequently enough to justify the indefinite detention of 25% of the remaining Guantanamo detainees.  And, it is crucial to note, those who suggest that this is a common occurrence are in effect arguing for the efficacy of torture:  that torture works (by leading the discovery of reliable, incriminating evidence).

All that said, it is undoubtedly true that this scenario could happen and, on rare occasion, has happened.  In the recent prosecution of Ahmed Ghailani, accused of involvement in the 1998 bombing of the U.S. embassies in Kenya and Tanzania, a key government witness was barred from testifying on the ground that the government discovered his identity by torturing a witness (Ghailani was nonetheless convicted of a felony that will send him to prison for life using independently obtained evidence).  In the wake of that ruling, many on the American Right insisted that this proves that detainees should be denied trials -- because those bothersome rules of justice produce bad outcomes -- but the response to that claim is the same as the one to those now justifying Obama's indefinite detention scheme on the same ground:  namely, there is no point in having a "justice system" or the "rule of law" if we empower the government to imprison whomever it wants whenever the rules and laws we've established impede that desire.  The reason for the "fruit of the poisonous tree" doctrine is the same as the bar on torture-obtained evidence:  there is no such thing as a "justice system" if the government can be rewarded for torturing people by allowing them to use the evidence they obtain when doing so.  Having a "justice system" means, at its core, that sometimes guilty people will go free.

That this may happen on rare occasion no more justifies indefinite detention than the possibility of the "ticking time bomb" scenario justifies torture.  Imprisoning people without trials based on evidence discovered via torture violates the longest-standing and most basic principles of justice.