The unstoppable allure of Gwynethfreude

From the stage to the TV screen, Paltrow is everywhere these days. But don't hate her for it 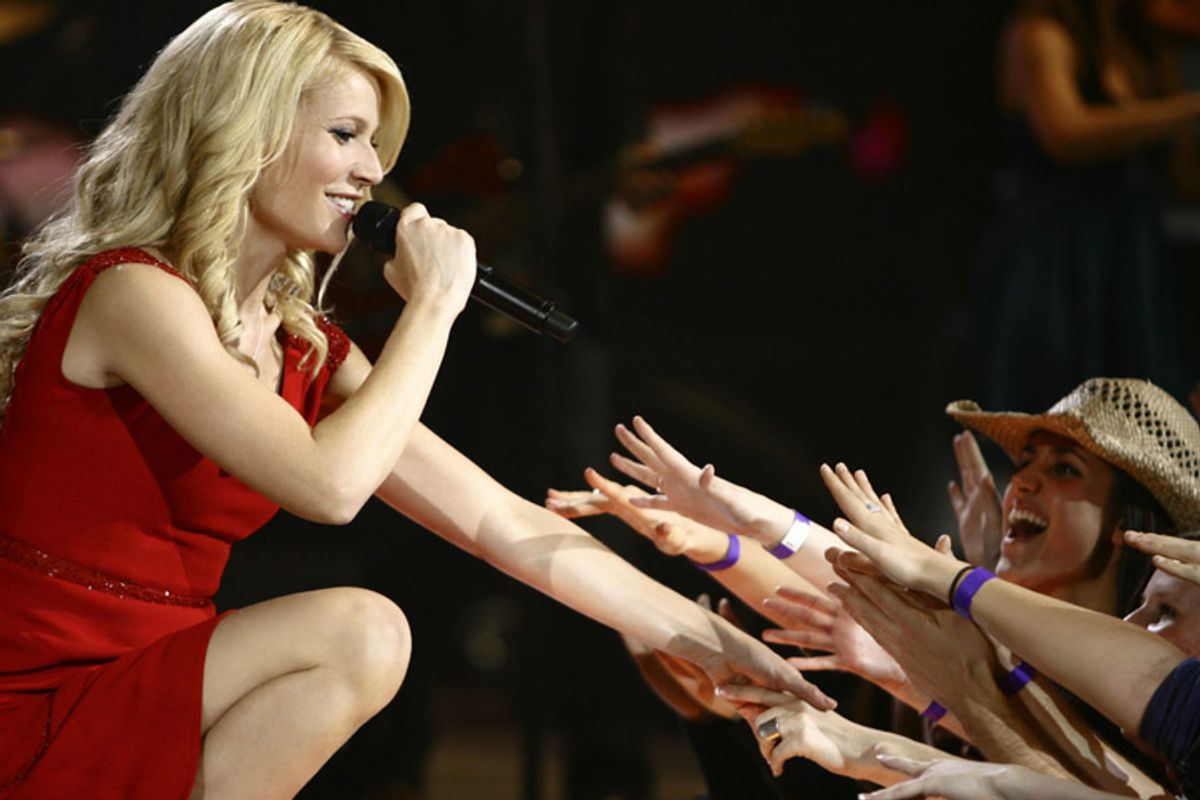 It's a great time for Gwynethfreude. The willowy Goopster has been so in your face lately that all but the most die-hard of her fans have got to be getting sick of it. Gwyneth Paltrow has in recent weeks sung at both the Grammys and the Oscars -- at the latter she was boldly introduced as "country music's newest star." On Tuesday, she returned to "Glee" to horse around in a Jazzercise get-up, belt out Gary Glitter songs, and insist that you accept her as sexy. To top it all off, she is now reportedly close to signing a fat record deal for her country/pop stylings. Even Chris Martin must be thinking she could cool it a bit.

Maybe if she hadn't made that Huey Lewis karaoke movie all those years ago, none of this would have happened. But no, we were probably always destined for a lifetime of full Paltrow assaults on all fronts; it's just her Hollywood royalty nature. And though any Spence alum who takes a fancy to becoming "country music's newest star" might have to face a little credibility stretching, there is something at once wonderful and terrible about the public spectacle of a woman who can apparently do and get whatever she wants. America, Gwyneth Paltrow is our 800-pound gorilla.

Unlike any number of far more musically successful, far more creatively limited individuals (cough cough Britney cough), Paltrow actually has plenty of chops. She's an often surprisingly funny, self-aware performer; she can carry a tune with ease, and she brings an easy, professional poise to everything she touches. And it's that ease that unnerves and exasperates her critics. She's gorgeous. She has an Oscar. She has so much that she can unself-consciously recommend $82 pajamas. For children. Does she really need the Grand Ole Opry too? Jesus, "Country Strong" didn't even do that well. I swear to God, if she writes a memoir, half of Brooklyn is going to commit suicide.

Paltrow is no coal miner's daughter or veteran of a Smoky Mountain Christmas. There's nothing hardscrabble about her. But the entertainment industry is not one long episode of "American Idol." Paltrow's success in any and apparently all her endeavors does not diminish anyone else's chances. It may strike deep at the heart of those "them that has, gets" resentments that a woman's seemingly charmed life just keeps getting more charmed. But she's not the reason your band isn't signed. Sure, she's had advantages you and I can't dream of. But while advantages can nurture talent, they can't create it. Though the rich are different, it doesn't mean they can't sing or act or be funny just like us poor people. Paltrow can, with reliable aplomb. And so as long as she's not going away any time soon anyway, what do we have to do to make her notice there's a job opening with her name all over it over on "Two and a Half Men"?