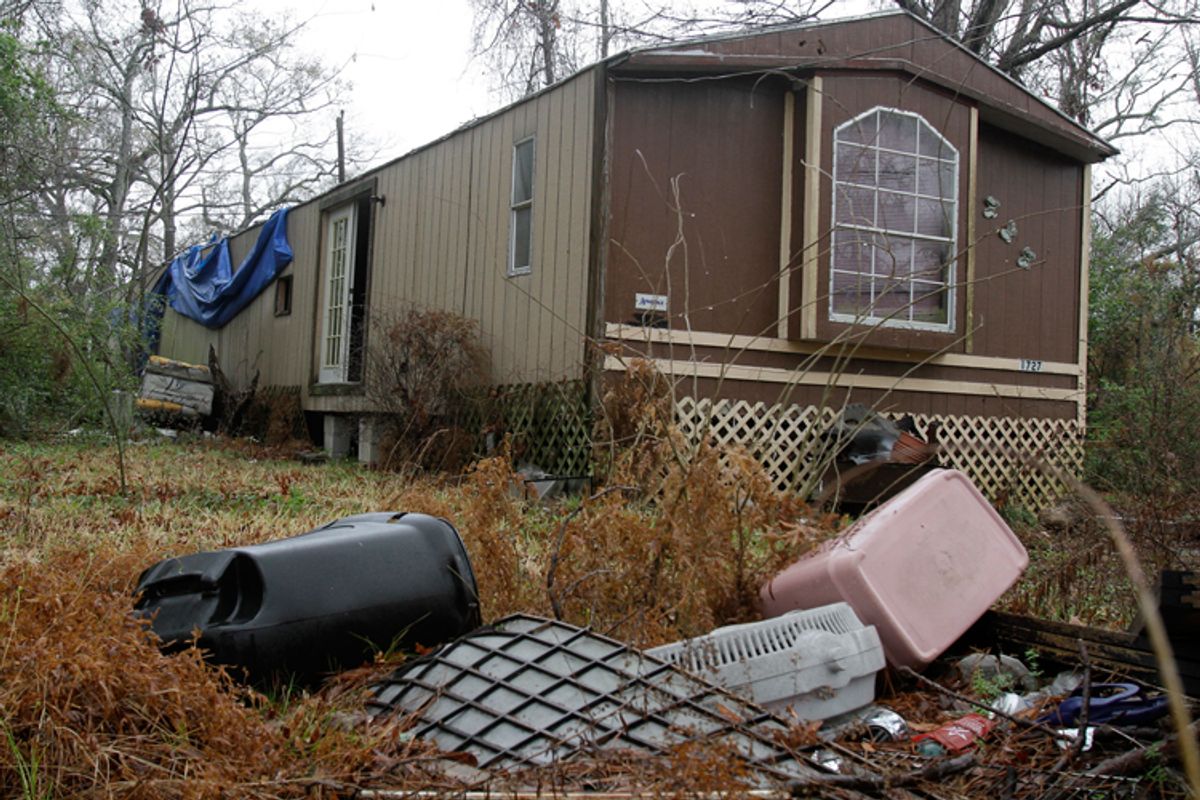 An abandoned trailer in Cleveland, Texas where authorities say an 11-year-old girl was sexually assaulted in November, 2010.
--

The 11-year-old Texas girl was allegedly gang-raped in an abandoned trailer. The suspects -- 18 of them -- range in age from middle-schoolers to a 27-year-old. The story came to light when a classmate of the girl told a teacher of seeing video of the attack on a cellphone. And if you think somebody can't make the rape and exploitation of a child about victim blaming, you didn't read the slanted, ill-conceived piece in Tuesday's New York Times.

In a feature by James C. McKinley Jr., the paper of record speculates on how the small town of Cleveland, Texas, has been rocked by the story, and the torturous question of "how could their young men have been drawn into such an act." How, indeed? It's surely a horrifying scenario when 18 young men are implicated in a crime of violence and degradation. The victim's affidavit says the assault began when a local 19-year-old offered her a ride in his car, and escalated to a protracted group assault, featuring "threats she would be beaten if she did not comply" and participants recording the abuse on their phones. How could these boys have been "drawn into such an act"? Was it drugs, sociopathy, coercion? Or was that little girl just asking for it?

After all, as the Times helpfully points out, "Residents in the neighborhood where the abandoned trailer stands -- known as the Quarters -- said the victim had been visiting various friends there for months. They said she dressed older than her age, wearing makeup and fashions more appropriate to a woman in her 20s. She would hang out with teenage boys at a playground, some said." Gosh, I wonder if she's pretty or you know, developed, because that's relevant too.

Because of her age, very few of the details of the victim's life are known. Maybe she was from a troubled home, and maybe she was indeed dressing older and wearing makeup. But let's just get something clear. She's an 11-year-old child who was reportedly gang-raped by as many as 18 young men, who then had her abuse flaunted around her hometown by her abusers. But the issue some townspeople are concerned with is how, as one resident says, "These boys have to live with this the rest of their lives."

I have an 11-year-old daughter. I know a lot of 11-year-old girls. Some of them are still remarkably innocent, and some of them are rather precocious. I can assure James C. McKinley Jr. and the New York Times that none of them -- even the ones who wear lipstick and jeggings, even the one who live in or have friends in the worst parts of our neighborhood, are courting a gang rape.

The search for explanations for an unfathomably awful event is more than understandable -- it's a journalistic imperative.  McKinley clearly attempted to take the temperature of the community, to explore the impact of what happened in that trailer on the town and its residents. Yet the story too often seems to circle back to the wrong participants in it. The Times quotes a neighbor lamenting, "Where was her mother? What was her mother thinking? How can you have an 11-year-old child missing down in the Quarters?" The anguish over the attack -- the implication that perhaps this was a child who was not protected at home -- is understandable. And it's crucial to make sure the correct people are being sought and punished.

The question, however, is not what that girl or her mother did to bring this on. And it's sloppy journalism for a reporter to run a story that casts a victim and her mother as somehow responsible for an attack, especially without including a single quote from anyone in town with a more sympathetic view of the family. That's far from the balanced journalism the Times aspires to. The girl's mother, identified only as Maria, told the New York Daily news this week that the family has received several angry phone calls, and that the child has been moved to foster care for her protection. "These guys knew she was in middle school," she said. "You could tell whenever you talked to her. She still loves stuffed teddy bears." Where's that quote in the Times story?

It's a painful thing to contemplate that a girl's circumstances may have made her more vulnerable to attack. But  being vulnerable does not put the burden of what happens on the victim. No 11-year-old deserves a word of questioning or doubt on that front. No one who has ever been sexually assaulted, and certainly none who has ever been sexually assaulted in such a sustained and inhumane way, deserves to have her makeup or clothing brought into the conversation, regardless of her age. And how demoralizing, how outrageous, how sickening that once again, when a female is brutally and inhumanely attacked, the issue of what her multiple assailants apparently did somehow pales next to the curiosity over what she must have done to provoke it.