The five most important lessons from Wisconsin

Tea Party Republicans, union-supporting Democrats -- both sides have their game on, now 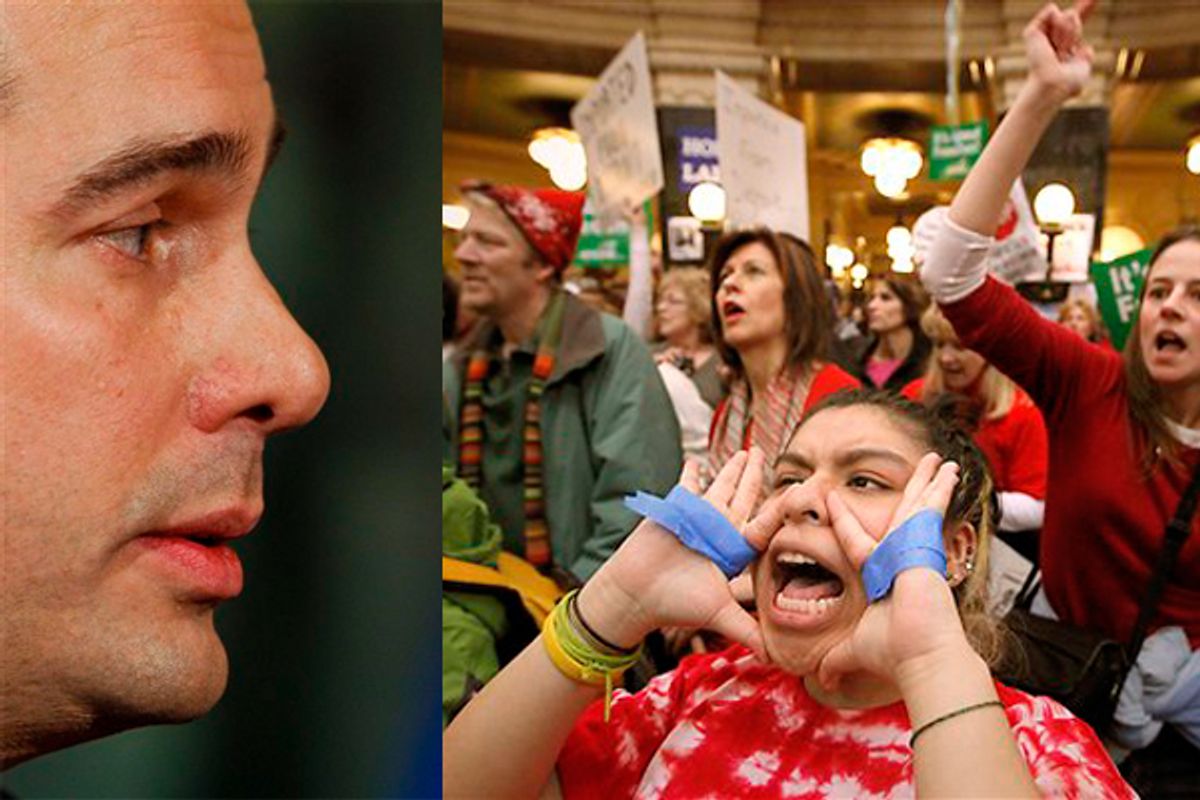 At the Milwaukee Journal-Sentinel, where reporters and editors enjoy the happy honor of living and working right at the molten hot center of the great Wisconsin clash between public sector unions and Gov. Scott Walker, columnist Craig Gilbert has spent some time crunching poll numbers and discovered an impressive fact: Walker can lay good claim to the title of most polarizing politician in the United States.

According to polls conducted by Public Policy Polling, 86 percent of Wisconsin's Republicans approve of Walker, compared to only 8 percent of Wisconsin's Democrats. The so-called partisan gap of 78 is "is bigger than for any governor in 37 states where PPP has polled dating back to September of 2010," writes Gilbert. Much bigger. California's Jerry Brown, for example, no stranger to partisan passion in his day, boasts a paltry partisan gap of only 50. In fact, in Wisconsin, "Walker inspires stronger feelings -- both pro and con -- than Obama."

What lessons can we learn from this remarkable display of polarization?

1. Politics has transcended the personal.

Few, if any, analysts saw this coming.

When the same pollster asked about Walker last week, the percentage of Wisconsinites with strong feelings about him -- negative or positive -- had risen from 40 percent to 70 percent.

Scott Walker is not the kind of politician you would normally expect to generate such passion. In his public appearances, he doesn't sound much like a fire-breathing ideologue. He's bland. But as his first order of business he attempted to push through a stunningly ambitious political agenda, and transformed himself instantly into a national figure. We're used to politicians drawing attention because of their own personal characteristics or rhetoric. But in Wisconsin, the agenda trumps all, and now Walker seems little more than a bystander in his own movement. The degree to which partisans support or oppose him seems to have little to with his qualities as a politician and everything to do with the starkness of his politics.

2. Wisconsin-style polarity marks a new peak in a trend long in the making.

Historians and political scientists have been tracking the growing partisan polarization of the United States for decades. The roots of the great divide go at least as far back as the Johnson administration, when the Voting Rights Act and other civil rights legislation catalyzed the migration of conservative Southern Democrats into the Republican Party. George W. Bush set a modern standard for inspiring passionate division -- and Barack Obama, at least so far, has proved his equal. The emergence of the Tea Party reinvigorated the right after crushing losses in 2006 and 2008. Now the left looks for energy from the Wisconsin protests -- and may well get it. But through it all the ongoing political realignment of the United States into two fervently opposed camps with very little middle ground continues to proceed apace. When both sides have high morale and energetic grass roots, where do we end up?

Progressives, liberals and Democrats of all stripes have been justifiably encouraged by the Wisconsin protests, and are especially happy at the polling numbers that indicate independents have a serious case of buyer's remorse when it comes to Walker. But the huge support that Walker is seeing from registered Republicans suggests that a liberal victory in the Badger State will only further motivate conservatives elsewhere to redouble their efforts. Both sides are fundraising off of Wisconsin. Republicans aren't abandoning Walker -- they're far more supportive of him than they were before the drama began.

4. Compromise -- on anything -- seems to be getting harder.

The latest news from Wisconsin focuses on the release of e-mails from Walker's office (after an open records request from the Milwaukee Journal Sentinel) suggesting that earlier this week the governor had finally been pushed to the point of offering some meaningful concessions. But so far, it looks like Democrats have rejected his overtures, and are doubling down on their strategy to pressure Republican state senators, and eventually Walker, with recall votes. Note the pattern here: Gov. Walker shocks Wisconsin with a bill that seeks to disembowel public sector unions -- Democrat state senators respond by going on the lam to Illinois and putting in motion an election do-over. It makes for great drama but what if ...

5. Federal politics are about to get Wisconsin-ized.

The belief that Republicans were blamed for the last government shutdown has encouraged both parties to maneuver in the hopes that the other side will get blamed for the next shutdown. But the most important lesson of Wisconsin-style polarization is that, no matter how a shutdown gets started, both sides are much more likely to maintain their own conviction that their opponents are completely in the wrong and at fault than they were able to do the last time we went through this dance. Echo chambers on both the right and left are far more deafening than in 1995. Sure, there are some independents who will make a relatively unbiased decision on whom to fault, but for the majority of voters, ideological loyalty seems bound to trump the facts on the ground.

Call it the Wisconsin dialectic. Tea Party overreach instigates a progressive counteraction, which, in turn .... gives us what, exactly? With the underlying political forces at work here, is there any possible way that a moderate Republican could emergse from the primary process as next year's presidential campaign gets under way? Perhaps the biggest lesson from Wisconsin is that the roller-coaster ride from Bush to Obama to Tea Party midterms is hardly losing steam. It's accelerating.