Is this ludicrous alien invasion film an attempt to make us feel better about the war in Afghanistan? 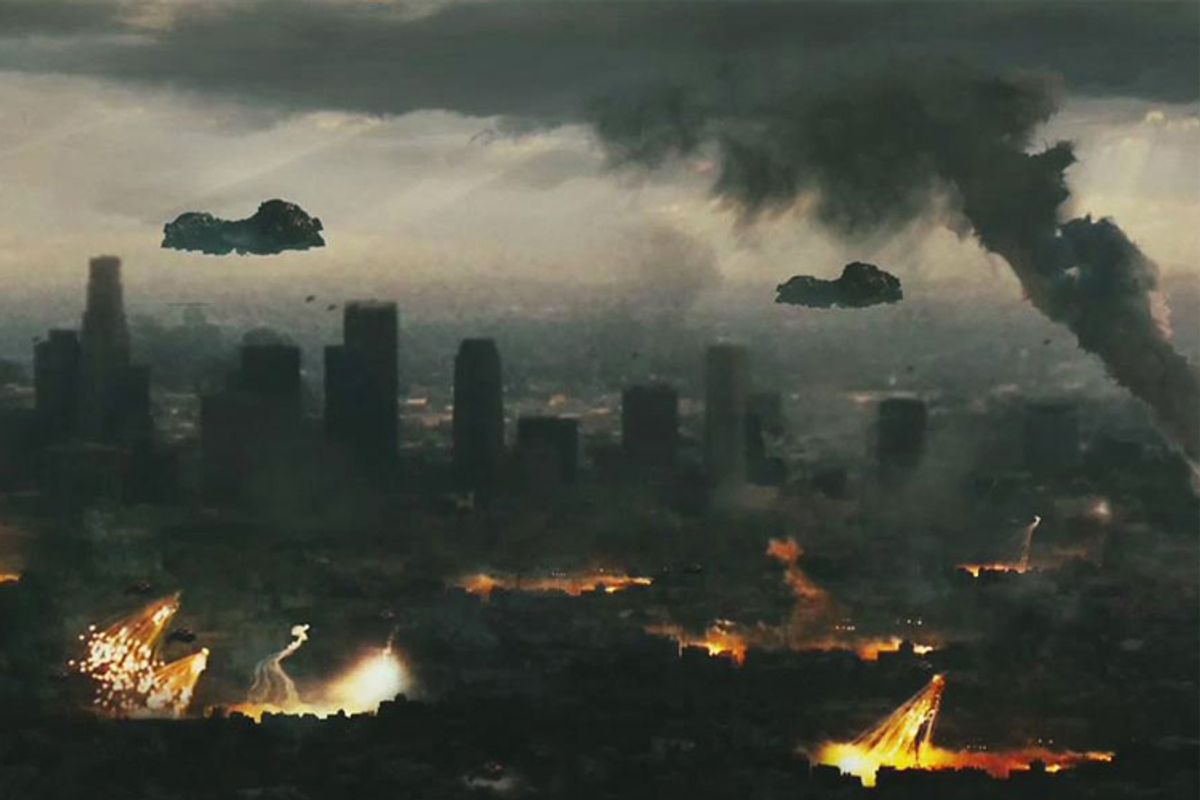 A still from "Battle: Los Angeles"
--

Now, don't get me wrong: As second-rate, thoroughly ripped-off military propaganda movies go, "Battle: Los Angeles" is reasonably effective. It follows a chopped-up platoon of Marines trapped behind enemy lines in Santa Monica, the enemy being an assortment of slimy, quasi-robotic, phoned-in extraterrestrials left unemployed by the "Alien" and "Predator" franchises. In fact, the whole movie seems to be built out of spare parts from better films (which admittedly isn't saying much); it's more like a remix of Ridley Scott's "Black Hawk Down," Kubrick's "Full Metal Jacket" and Spielberg's "War of the Worlds" than an original motion picture. Its most original elements are the startling, hawk-like angles of Aaron Eckhart's nose and chin, which compel obedience and team spirit from the embattled Marines through sheer sharpness and pointedness. Oo-rah! Retreat, hell.

That last paragraph was already way too much time and mental energy spent on sober explication of a movie that made me wish, from the first to the last of its 116 minutes (forewarned is forearmed!), that I were at home watching Paul Verhoeven's "Starship Troopers" again instead. Eckhart's remarkable machine-tool face, and the I've-been-to-hell-and-back hardass demeanor he affects as Staff Sgt. Mike Nantz, nominal protagonist of "Battle: Los Angeles," would actually fit beautifully in "Starship Troopers." Here, unfortunately, all the military jargon and barked orders, and the whole "I'm too damn tough to reveal the wounded depths of my American soul" thing, are completely po-faced. Which is probably why the audience at the New York screening I attended started to laugh.

Yeah, that thing happened: When the relentless, slam-bang action lets up, and director Jonathan Liebesman and writer Christopher Bertolini stretch for something approximating human drama, "Battle: Los Angeles" starts to spin its wheels in the muck of the audience's attention span. Sure, a Manhattan freebie audience is arguably a cynical environment, but still: People who've bothered to leave home and watch a movie in a theater have a strong incentive to have fun, and it's always interesting when they start having fun at the movie's expense. Eckhart was delivering an especially earnest and cliché-ridden monologue, meant to be intense and ferocious, to his battle-weary men when one guy behind me started to crack up. A few others followed, and then maybe a third of the audience was busting a gut, and suddenly what had been up to that point a brainless but competent $100 million action spectacle became fatally ridiculous.

I'm not claiming that reaction will be universal; in fact, I'm pretty sure it won't. But what happened at that screening speaks to the fact that the agitprop element of "Battle: Los Angeles" is way too obvious, and that if you devote even a pair of isolated brain cells to this movie it's likely to seem uncomfortable and kind of naked. Sure, it's just an alien-invasion action flick with lots of explosions, made by the dude who directed the 2006 "Texas Chainsaw Massacre" prequel, and I shouldn't take it seriously. Chump-a-dump-chump. (Maybe that'll save you some time on the comments page.) But the politics and ideology of "Battle: Los Angeles" start out weird and get weirder. First of all, it's like the movie is trying to make Americans feel better about the fact that our ultra-high-tech military has been stalemated by a bunch of 15th-century tribalist wackos with 30-year-old Kalashnikovs on the other side of the world. OK, OK, OK -- but wait till the technologically superior alien race gets here. That's when we'll open the real can of whup-ass!

When I woke up the morning after the bust-a-gut screening, I realized that the movie's real reversal is psychological, in that it depicts this band of gung-ho, multicultural United States Marines as resistance fighters, striking at the underbelly of an occupying army. Allah-u-akbar! That's right; if there's any tenuous parallel to contemporary affairs at work here, it casts the Americans as the guerrilla insurgents. We never learn a damn thing about the alien invaders in "Battle: Los Angeles" -- beyond the evident fact that they want our planet without us on it -- which is why you can call it a war movie or a disaster movie, but it isn't really science fiction. They're a fantasy enemy vomited up from the collective id and scrubbed clean of all racial, political or religious considerations, against whom we can look like noble underdogs. Or they're just the underpowered villains of an unintentionally funny action movie starring Aaron Eckhart's chin. Either way, we're talking serious symptoms of imperial decline.