In defense of NPR 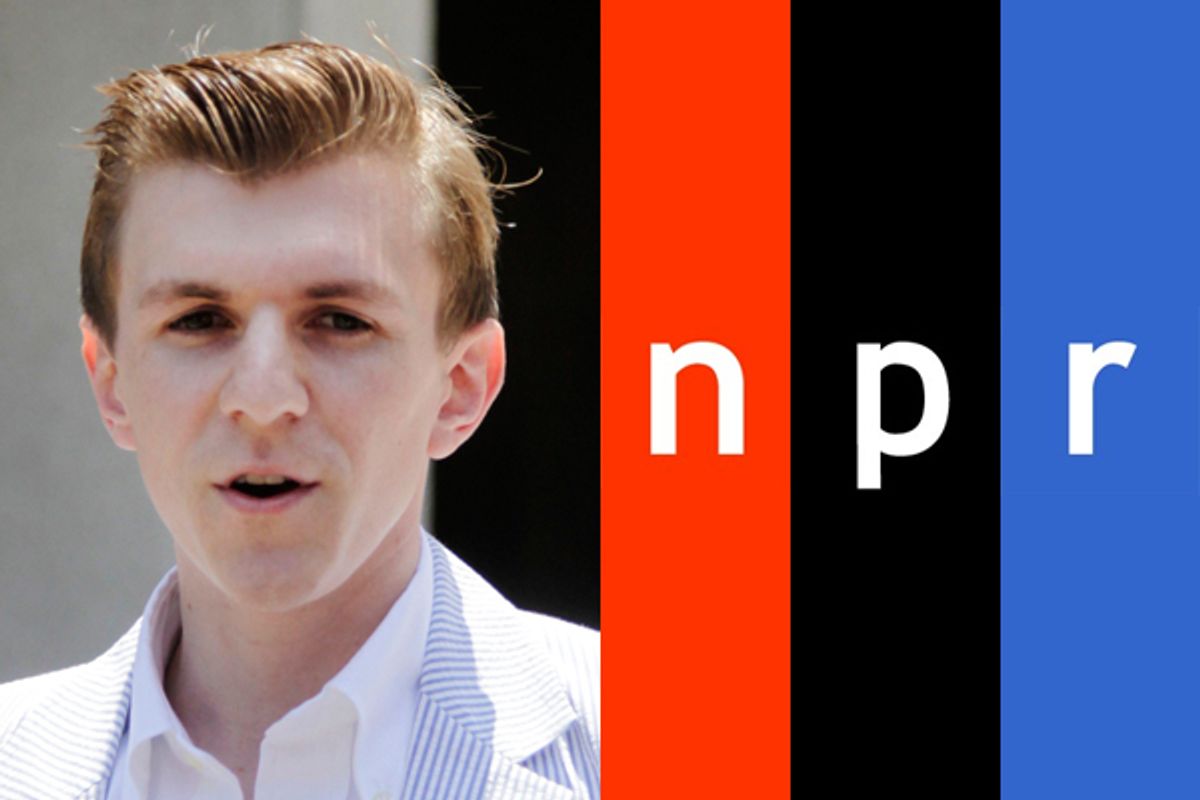 Come on now: Let’s take a breath and put this NPR fracas into perspective.

Just as public radio struggles against yet another assault from its long-time nemesis -- the right-wing machine that would thrill if our sole sources of information were Fox News, Rush Limbaugh, and ads paid for by the Koch Brothers -- it walks into a trap perpetrated by one of the sleaziest operatives ever to climb out of a sewer.

First, in the interest of full disclosure: While not presently committing journalism on public television, the two of us have been colleagues on PBS for almost 40 years (although never for NPR). We’ve lived through every one of the fierce and often unscrupulous efforts by the right to shut down both public television and radio. Our work has sometimes been the explicit bull's eye on the dartboard, as conservative ideologues sought to extinguish the independent reporting and analysis they find so threatening to their phobic worldview.

We have come to believe, as so many others have, that only the creation of a substantial trust fund for public media will free it from the whims and biases of the politicians, including Democratic politicians (yes, after one of our documentaries tracking President Clinton's scandalous fund-raising in the mid-'90s, the knives were sharpened on the other side of the aisle).

Richard Nixon was the first who tried to shut down public broadcasting, strangling and diverting funding, attacking alleged bias and even placing public broadcasters Sander Vanocur and Robert MacNeil on his legendary enemies list. Nixon didn't succeed, and ironically his downfall was brought about, in part, by public television's nighttime rebroadcasts of the Senate Watergate hearings, exposing his crimes and misdemeanors to a wider, primetime audience.

Ronald Reagan and Newt Gingrich tried to gut public broadcasting, too, and the George W. Bush White House planted partisan operatives at the Corporation for Public Broadcasting in an attempt to challenge journalists who didn't hew to the party line.

But what's happening now is the worst yet. Just as Republicans again clamor for the elimination of government funding and public broadcasting once more fights for life, it steps on its own oxygen line. The details are well-known: how NPR’s development chief, Ron Schiller, stupidly fell into a sting perpetrated by an organization run by the young conservative hit man James O'Keefe, a product of that grimy underworld of ideologically-based harassment which feeds the right's slime machine. Posing as members of a phony Muslim group, O'Keefe's agents provocateurs offered NPR a check for $5 million -- an offer that was rejected.

But Ron Schiller couldn’t leave it there. Unaware that he was speaking into a hidden camera and microphone, and violating everything we're told from childhood about not talking to strangers, he allowed the two co-conspirators to goad him into a loquacious display of personal opinions, including his belief that Tea Partiers are racist and cult-like. As the record shows, more than once he said he had taken off his "NPR hat" and was representing himself as no one other than who he is. His convictions, their expression so grossly ill-advised in this instance, are his own.

Ron Schiller's a fundraiser, not a news director. NPR keeps a high, thick firewall between its successful development office and its superb news division. The "separation of church and state" -- the classic division of editorial and finance -- has been one of the glories of public radio as it has won a large and respectful audience as the place on the radio spectrum that is free of commercials and commercial values.

If you would see how this integrity is upheld, go to the NPR website and pull up any of its reporting since 2009 on the Tea Party movement. Read the transcripts or listen to its coverage -- you will find it impartial and professional, a full representation of various points of view, pro and con. Further, examine how over the past few days NPR has covered the O'Keefe/Schiller contretemps and made no attempt to cover up or ignore its own failings and responsibilities.

Then reverse the situation and contemplate how, say, Fox News would handle a similar incident if they were the target of a sting. Would their coverage be as "fair and balanced" as NPR's? Would they apologize or punish their outspoken employee if he or she demeaned liberals? Don't kid yourself. A raise and promotion would be more likely. Think of the fortune Glenn Beck has made on Fox, spewing bile and lies about progressives and their "conspiracies."

And oh, yes, something else: Remember what Fox News chief Roger Ailes said about NPR executives after they fired Fox contributor Juan Williams? "They are, of course, Nazis," Ailes told an interviewer. "They have a kind of Nazi attitude. They are the left wing of Nazism. These guys don’t want any other point of view." When the Anti-Defamation League objected to the characterization, Ailes apologized but then described NPR as "nasty, inflexible" bigots.

Double standard? You bet. A fundraiser for NPR is axed for his own personal bias and unprofessionalism but Ailes gets away scot free, still running a news division that is constantly pumping arsenic into democracy's drinking water while he slanders public radio as equal to the monsters and murderers of the Third Reich.

Sure, public broadcasting has made its share of mistakes, and there have been times when we who practice our craft under its aegis have been less than stalwart in taking a stand and speaking truth to power. We haven't always served well our original mandate to be "a forum for debate and controversy," or to provide "a voice for groups in the community that may be otherwise unheard," or helped our viewers and listeners "see America whole, in all its diversity." But for all its flaws, consider an America without public media. Consider a society where the distortions and dissembling would go unchallenged, where fact-based reporting is eliminated, and where the field is abandoned to the likes of James O'Keefe, whose "journalism" relies on lying and deceit.

We agree with Joel Meares who, writing for the Columbia Journalism Review, expressed the wish that NPR had stood up for themselves and released a statement close to the following:

"Ron Schiller was a fundraiser who no longer works for us. He had nothing to do with our editorial decision making process. And frankly, our editorial integrity speaks for itself. We've got reporters stationed all over the world, we've won all sorts of prizes, we've got an ombudsman who is committed to examining our editorial operations. If you think our reporting is tainted, or unreliable, that’s your opinion, and you're free to express it. And to look for the evidence. But we will not be intimidated by the elaborate undercover hackwork of vindictive political point-scorers who are determined to see NPR fail."

That’s our cue. Come on, people: Speak up!