Live from the Muslim "radicalization" hearing

A Republican congressman closes the hearing by declaring, "I have many friends who are Muslims" 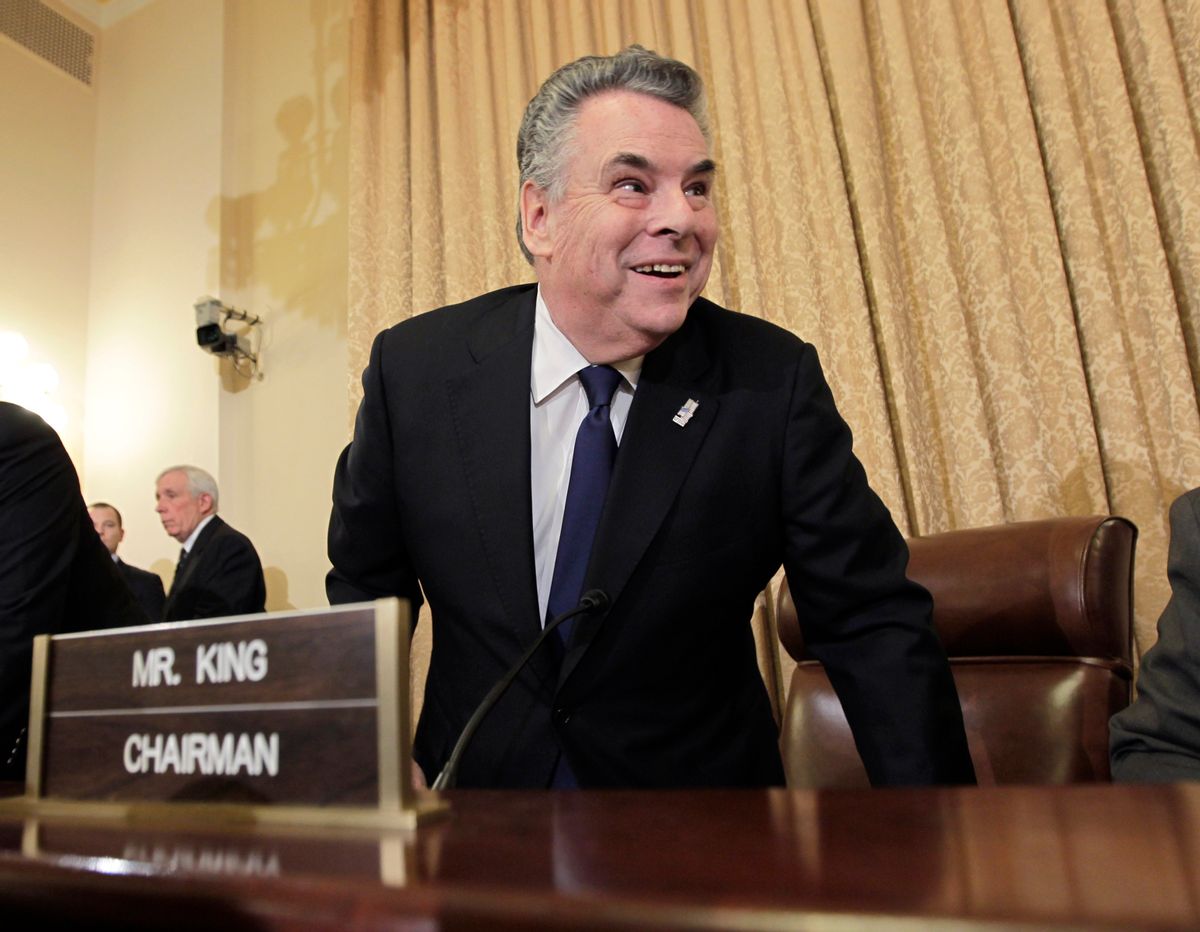 Rep. Peter King's much-anticipated first hearing on "radicalization" among American Muslims is happening right now. We'll be updating this post with developments as long as it lasts. C-Span is live-streaming the hearing here.

For some background, check out some of our past coverage: civil liberties groups voiced concern that King is running a witch hunt; King's past support for the terrorist IRA came under scrutiny; and King backed off some more controversial anti-Muslim witnesses after criticism.

1:50 The hearing ends with a brief statement from Rep. Thomas Marino (R-PA) defending the hearing itself (he also invokes the inevitable "I have many friends who are Muslims" line). Indeed, much of the hearing was taken up arguing about the propriety of the hearing. Marino also assures a Democratic colleague that he would be on board with a similar hearing about the KKK and Christian terrorism in the future.

King closed the session by thanking witnesses and noting that it went more smoothly than might have been expected, given the controversy. It's not clear what's specifically is going to happen net -- but King has suggested that there are more hearings to come on Muslim "radicalization." In terms of how today's session will play in the media, Adam Serwer seems correct that the Dems will promote Rep. Keith Ellison's emotional testimony, while Republicans will emphasize the story of Melvin Bledson, whose son became an Islamic extremist and allegedly killed a solider in Arkansas.

The other big story here is how King significantly amped down his own rhetoric in the face of persistent criticism over the past few months. This is a man who in recent years has repeatedly claimed that 80 percent of mosques are controlled by extremists and was in the forefront of the fight against the so-called "ground zero mosque." Today, finding himself in an intense media spotlight, King came off as relatively sober -- if sticking to his guns on some controversial claims. (His full opening remarks are here.)

1:28 Chris Moody at the Daily Caller gets the video of Rep. Sheila Jackson Lee (D-TX) railing against King and the framing of the hearing for "demonizing ... a whole broad base of human beings." She added: "There are no redeeming factual information that we will receive today that can add to the abhorrence that all of us have on terrorism in the United States of America."

12:57 And the fight over CAIR reaches as a fever pitch as freshman Rep. Chip Cravaak (R-MN) calls the group "a terrorist organization," citing the case I described below. Cravaak was challenging Los Angeles County Sheriff Lee Baca, who has emerged as the star witness for the Democrats, as to why Baca works with the "terrorist" CAIR. (He had said earlier that his deputies had good relations with the southern California chapter of the group.)

Responded Baca: "If the FBI has something to charge CAIR with, bring those charges."

12:34 Several Republicans -- including King and now Rep. Paul Broun, a man who once was part of a comic effort to hunt out Muslim interns from Capitol Hill -- have taken shots at the Council on American Islamic Relations (CAIR), which is one of the most prominent Muslim groups in the country.

There's a complicated backstory here, but the most common attack on CAIR involves citing the fact that the group was named as an unindicted co-conspirator in the Holy Land Foundation Hamas funding case in the late 2000s. The Texas-based Holy Land Foundation was convicted of sending $12 million to Hamas, which is illegal because Hamas is designated by the U.S. government as a terrorist group. But the list of co-conspirators contained more than 300 groups -- including some of the biggest American Muslim organizations -- and has been disputed by CAIR and civil liberties groups as unfair.

Meanwhile, it's worth noting that CAIR has denounced terrorism, as the group explains in a prominent section of its website:

The Council on American-Islamic Relations (CAIR) has consistently and persistently condemned terrorism and the killing of innocent civilians.  CAIR has also organized fatwas, petition drives, placed advertisements in national and local newspapers, ran public service announcements on television and radio stations, helped local Mosques across the United States in holding open houses, published Op-Eds in local and national newspapers, conducted inter-faith meetings and worked with scholars to disseminate the peaceful teachings of Islam.

11:45 We've just heard several exchanges that require some context. Rep. Bennie Thompson (D-MS), the ranking member of the committee, has been asking witnesses whether they agree with a statement made by an unspecified Republican that there are "too many mosques" in America. Dr. Jasser, the leader of the right-wing Muslim group, replied that he did not agree.

What Thompson didn't mention is that the statement was made by Peter King, the chair of the committee, in a now-notorious interview with Politico in 2007. In response to Thompson just now, King said, "I never said there's too many mosques in America." In fact, he did say that. Here is the video of the 2007 interview:

King has consistently maintained that he was really saying that there are too many mosques who do not cooperate with police in the country.

11:25 And here is the video of that emotional moment from Keith Ellison I mentioned earlier:

11:18 The committee just heard from the father of the man who in 2009 allegedly opened fire at a Little Rock military recruiting center, killing one soldier and wounding another. The father, Melvin Bledsoe, said his son converted to Islam and then became an extremist after traveling to Yemen. "Something is wrong with the Muslim leadership in Nashville," he added.

There is some good commentary and analysis out there on the hearing -- and, perhaps more importantly, the Obama administration's own policies in countering "radicalization." Adam Serwer at the American Prospect points out that, while the administration has been playing "good cop" and criticizing King's fiery rhetoric, it is in fact "already singling out American Muslims for close scrutiny." He writes about the infiltration of mosques:

The Obama administration kept the Bush-era FBI investigative guidelines, which are more lax on matters of racial and ethnic profiling. The rules allow FBI agents to initiate surveillance without suspicion of criminality, allow domestic intelligence gathering in religious spaces, and even allow agents to gather information on "concentrated ethnic communities."

Meanwhile, ThinkProgress points to a report from the Muslim Public Affairs Council concluding that non-Muslim Americans have been involved in plenty of terrorist attacks and plots in the last several years. Think, for example, of the anti-tax activist who flew his plane into an IRS building in Texas last year. Or the attempted bombing of a Martin Luther King Day parade in Spokane, Washington, in January.

10:30 Dr. Zuhdi Jasser, an Arizona man who founded the American Islamic Forum for Democracy, used his time to speak out  against some of the larger national Muslim advocacy groups. "Too many so‐called Muslim leadership groups in America, like the Council on American‐Islamic Relations (CAIR) or Muslim Advocates, have specifically told Muslims across the nation, for example, not to speak to the FBI or law enforcement unless they are accompanied by an attorney," he said. "Rather than thanking the FBI for ferreting out radicals within our community, they have criticized sting operations as being 'entrapment.'"

The backstory here is that CAIR's California chapter was criticized for putting up posters that read, "Build a wall of resistance. Don't talk to the FBI." CAIR has said it is merely trying to inform people of their constitutional rights.

Jasser himself came to prominence with a key role in a lurid documentary called the Third Jihad, which was produced by the Clarion Fund. As I've reported, the Clarion Fund has close ties to the Israeli right, and appears to be funded by a wealthy Chicago businessman.

10:15 Rep. Keith Ellison (D-MN), the first Muslim elected to Congress (and one of two current Muslim members), is a witness at the hearing and he gave an emotional statement this morning in which he told the story of Mohammed Salman Hamdani, a paramedic who was killed on 9/11:

Let me close with a story, but remember that it’s only one of many American stories that could be told.  Mohammed Salman Hamdani was a 23-year-old paramedic, a New York City police cadet and a Muslim American.  He was one of those brave first responders who tragically lost their lives in the 9/11 terrorist attacks almost a decade ago.  As The New York Times eulogized, “He wanted to be seen as an all-American kid. He wore No. 79 on the high school football team in Bayside, Queens, where he lived, and he was called Sal by his friends… He became a research assistant at Rockefeller University and drove an ambulance part-time. One Christmas, he sang in Handel’s Messiah in Queens. He saw all the Star Wars movies, and it was well known that his new Honda was the one with “Yung Jedi” license plates.

Mr. Hamdani bravely sacrificed his life to try and help others on 9/11.  After the tragedy some people tried to smear his character solely because of his Islamic faith.  Some people spread false rumors and speculated that he was in league with the attackers only because he was Muslim. It was only when his remains were identified that these lies were fully exposed.