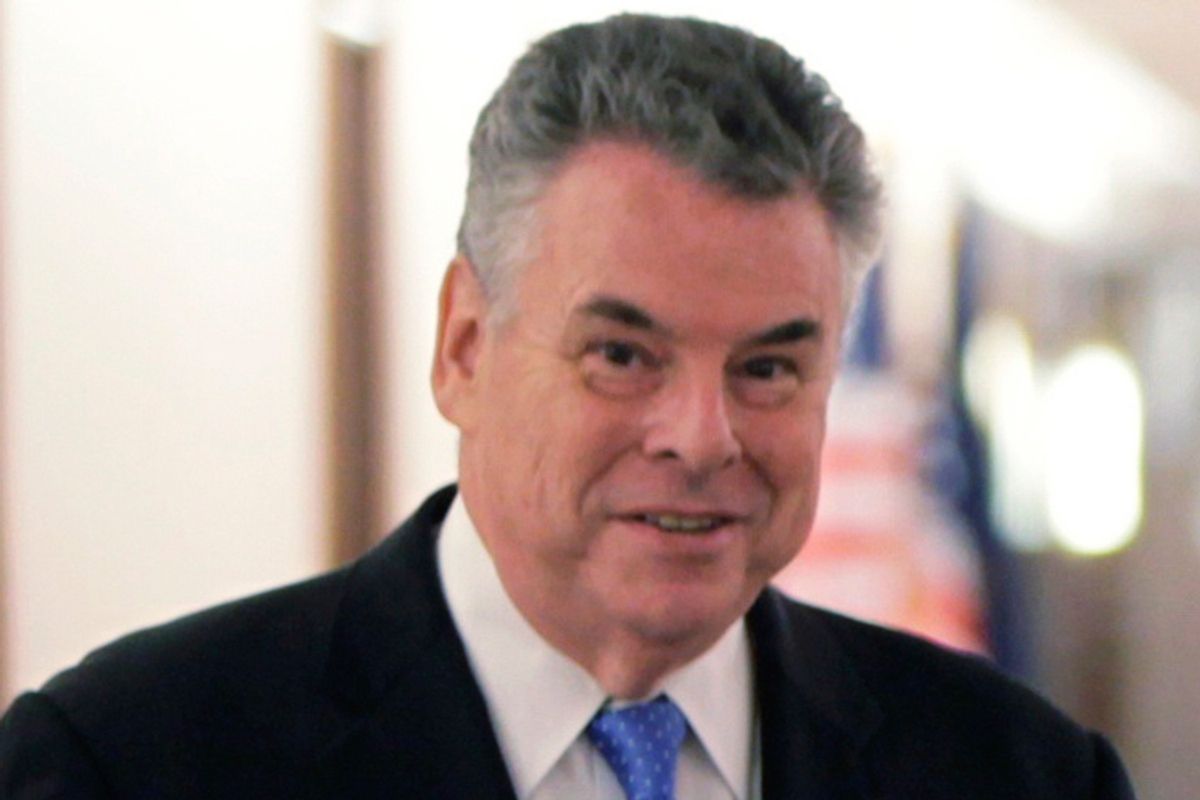 Rep. Peter King, the Homeland Security committee chairman who will convene hearings Thursday on the threat of domestic terrorism and "radicalization" among American Muslims, is finding it difficult to shake his past. As is now well known thanks to a spurt of recent press, King was, as a Long Island politician on the make, an active supporter of the Irish Republican Army for many years.

To this day, even while he's taking a hard line against Muslim terrorism, King still describes the IRA as a "legitimate force." (At the same time, King wants to brand WikiLeaks' Julian Assange a terrorist.)

At least one victim of an IRA attack has called out King for his "hypocrisy." So, for the sake of the record, we thought it would be worth collecting a few of King's more striking quotes about the IRA when its campaign of terrorism was in full force. None of this is to say that terrorism is not a complex issue that deserves to be considered in a nuanced way. But now that King is chairman of the Homeland Security committee and taking the lead looking at terrorism, it's worth knowing his history.

'The message we are sending is that Irish-Americans are united in solidarity against British misrule on Northern Ireland,' said Mr King, who is comptroller of Nassau County on Long Island.

From that same year, here's a description of King's fiery rhetoric as a leader of the St. Patrick's Day parade in New York:

Shouts of "Long live the King" marked the annual St Patrick's Day parade here -- cheers for Peter King, a militant supporter of the Irish Republican Army who led 200,000 marchers up Fifth Avenue. King, the financial controller of suburban Nassau County, was named grand marshal of the parade after a bitter two-month campaign. "I was elected to send a clear message to England to get out of Ireland," he said. "The IRA's violence is only a reaction to violence started by the British Government."

Here is what King said at a pro-IRA rally in 1982, according to the Times:

"We must pledge ourselves to support those brave men and women who this very moment are carrying forth the struggle against British imperialism in the streets of Belfast and Derry."

And, finally, here is an account from the Daily News in 1997 about King going to bat for a former IRA terrorist facing deportation from the United States:

New York lawmakers will take to the House floor today to pressure the Justice Department to spare seven accused IRA terrorists from being kicked out of the United States.

Reps. Pete King (R-L.I.) and Tom Manton (D-Queens) will lead the speeches in support of Irish political figures such as Brian Pearson, whom the Immigration and Naturalization Service wants to deport as a terrorist.

"We want to focus attention on the terrible abuse of power by the Justice Department to deport these decent men," said King, Sinn Fein's biggest cheerleader in Congress.

The Justice Department oversees the INS.

Pearson came to the United States a decade ago after serving 12 years in an Irish prison for bombing a Northern Ireland police barracks. He's now a carpenter, married to an American woman, has a 5-year-old daughter and lives in Pearl River, Rockland County.

With research assistance from Justin Spees