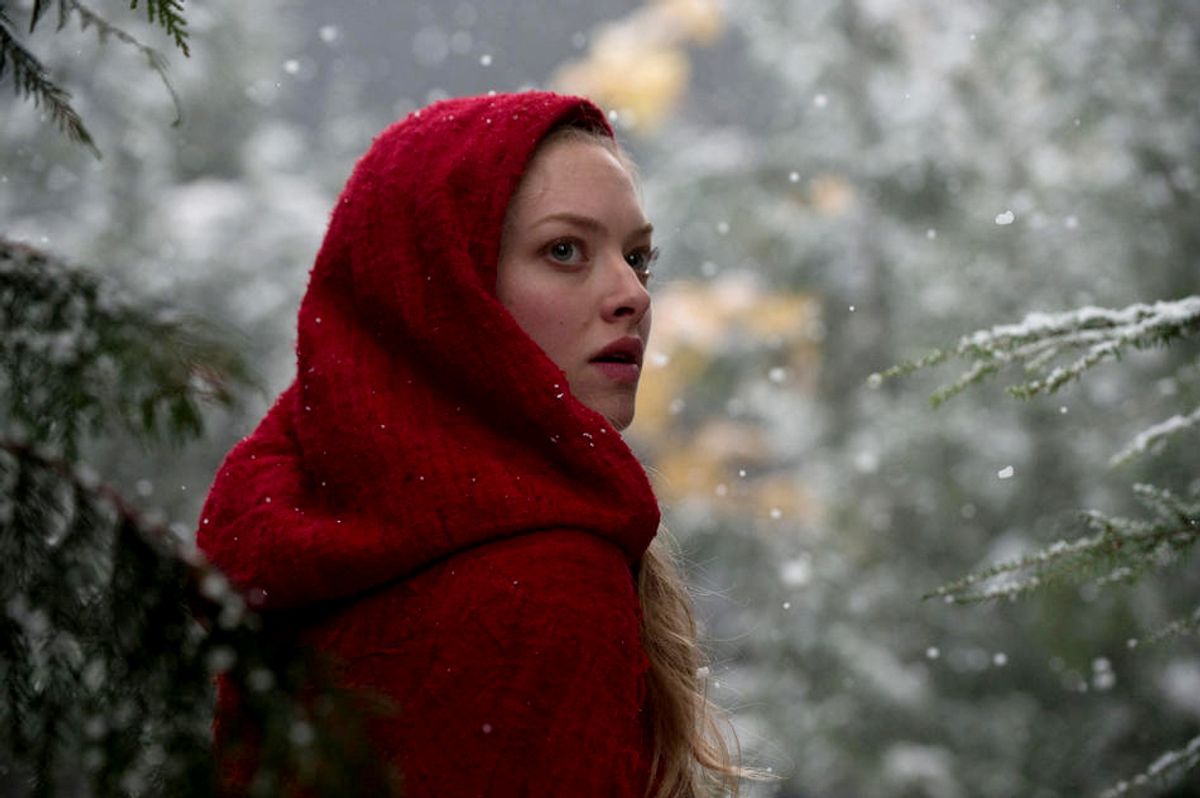 Warner Bros. has kept "Twilight" director Catherine Hardwicke's new film of "Red Riding Hood" tightly under wraps until this week, and now that I've seen it, I can understand why. It's not quite because "Red Riding Hood" is a monumental disaster, although I'm sure some reviews will make it sound that way. It's more that it's strange and stupid and half-compelling and sometimes beautiful, with its big, bad talking wolf and Amanda Seyfried's big, blue, startled eyes and a Christmas-card medieval village inhabited by escapees from a mid-'90s prime-time soap. I can imagine people liking "Red Riding Hood" -- indeed, some people will love it, in that highly contemporary half-ironic spirit -- but its WTF factor is off the charts, beginning with Hardwicke's all-too-obvious attempt to avenge herself upon the "Twilight" franchise.

Just to get you caught up on all the crucial back-story gossip: Hardwicke, a veteran production designer who broke into directing with the indie sensation "Thirteen" in 2003, was widely praised for the first "Twilight" film, both because it made tons of money and because it was a lot weirder and more interesting than most people expected. But the producers of the teen-vampire series replaced her with "Golden Compass" director Chris Weitz for the next film, "New Moon," amid a whole bunch of malicious whispers: The cast didn't like her, the shoot was chaotic, the cinematographer and editor had to rescue the movie, and so on. Flash-forward a couple of years, and here we are with Hardwicke's new project: A fairy tale about a beautiful young virgin caught between two smoldering male-model types and beset by supernatural forces, which ends with an emotional cliffhanger designed to make us clamor for a sequel.

Well, OK, then. But as easy as it may be to mock "Red Riding Hood" for its Renaissance Faire 90210 flavor and its yonder-is-the-castle-of-my-father dialogue -- and, believe me, it's easy, and fun too! -- the movie has a certain campy integrity that gradually grew on me. Some of Hardwicke's choices seem misguided, like the picturesque storybook village built of Lincoln Logs that M. Night Shyamalan would reject for being too corny, or the supposedly heinous talking wolf who is simply too gosh-darn cuddly for words. Aww -- who's a cute ginormous puppy dog? I said, who's a cute ginormous puppy dog? But I still get the feeling that they're actually her choices.

Casting Amanda Seyfried, a spectacular beauty with a wide-open, alarmed face, brilliant skin and endless skeins of blond hair, in the central role is one gamble that pays off. Mostly known for her TV roles (in "Big Love" and "Veronica Mars"), Seyfried gets laced into some Renaissance-era lingerie and shrouded in the titular red cloak here, and has to command the screen as a symbol of both purity and sexuality and also as a halfway plausible character. The fact that "Red Riding Hood" works at all is a testament to her performance as a girl whose sexual awakening coincides with -- and in some sense provokes -- the discovery that the world around her is full of inexplicable evil.

Seyfried's Valerie -- yes, people, Red Riding Hood's real name is Valerie -- lives in the aforementioned picture-book village full of people from the west side of L.A., including her suspiciously hot, golden-ringletted mother (Virginia Madsen) and her drunken, embittered dad (Billy Burke, who -- yes! -- also plays the dad in the "Twilight" series). She is betrothed to the local blacksmith's lunky but likable son, Henry (Max Irons), but long ago gave her heart away to Peter (Shiloh Fernandez), a young woodcutter with moussed-up dark hair and a crooked smile. And yes, of course, she also has a grandmother, played deliciously by Julie Christie as a sort of hippie herbalist and locavore chef, who isn't quite trusted by the villagers and lives alone in the forest without fear of the big, bad wolf.

Said wolf has recently broken his long-standing truce with the village by killing a local girl, which sets the miscellaneous and immensely nutty plot machinery of David Leslie Johnson's screenplay in motion. Male villagers with torches head out on a hunt and come back with a wolf's head on a stick, occasioning a neo-pagan, all-night trance-house rave that's pretty much a blast. But sniveling local cleric Lukas Haas has summoned a fanatical wolf-hunter named Father Solomon (Gary Oldman), who arrives in a black coach-and-four with two little girls, a retinue of big, scary black warriors, and a rolling bronze torture chamber in the shape of an elephant, which someone later dubs "the Brazen Beast." No one, sadly, ever says, "Unleash the Brazen Beast!"

Yes, in its loonier moments this movie is exactly that awesome, although I can't decide whether it's setting out to be the "Showgirls" of medieval-fairy tale movies or simply getting there by accident. Oldman, no slouch when it comes to devouring the scenery, plays Father Solomon as a displaced Middle European aristocrat, all sibilant S's and perfect coiffure. When he imprisons some suspected wolf-sympathizer inside the elephant and lights a fire beneath it, Solomon hears the poor kid howling and lisps, "Lisssen to how he ssings wiss ze love of Sssatan!" Later, after he has imprisoned Valerie on charges of general hotness and irresistibility to wolves, he brings her the blood-red riding hood made by her grandmother: "It iss time to put on your harlot'sss robes!"

Unhappily, Johnson and Hardwicke get stuck in a not very interesting mystery story: If, as Father Solomon argues, the wolf is actually a werewolf who lives among them in human form, then who is it, and why is it so interested in Valerie? The problem is that there are a number of pretty obvious suspects and the wolf has to be one of them, and since the filmmakers spend a lot of time leading us down false trails, you may well figure out Wolfie's identity through negative deduction long before the big revelation.

An even bigger problem is that you can't reduce one of the most potent fairy tales in the European tradition to a pseudo-Freudian whodunit wrapped in a romantic triangle without draining away much of its resonance. Making the wolf into a character with a personal history and a specific set of grievances -- instead of a malevolent force who is everywhere and nowhere, inside us and in the world -- seems like a spectacularly dumb decision. I guess it sums up this plucky, idiotic and almost irresistible movie, which has moments of transcendent silliness but never quite manages to ssing wiss ze love of Sssatan.