If you didn't love him in "The Hangover"...you probably won't like him better on "Saturday Night Live" 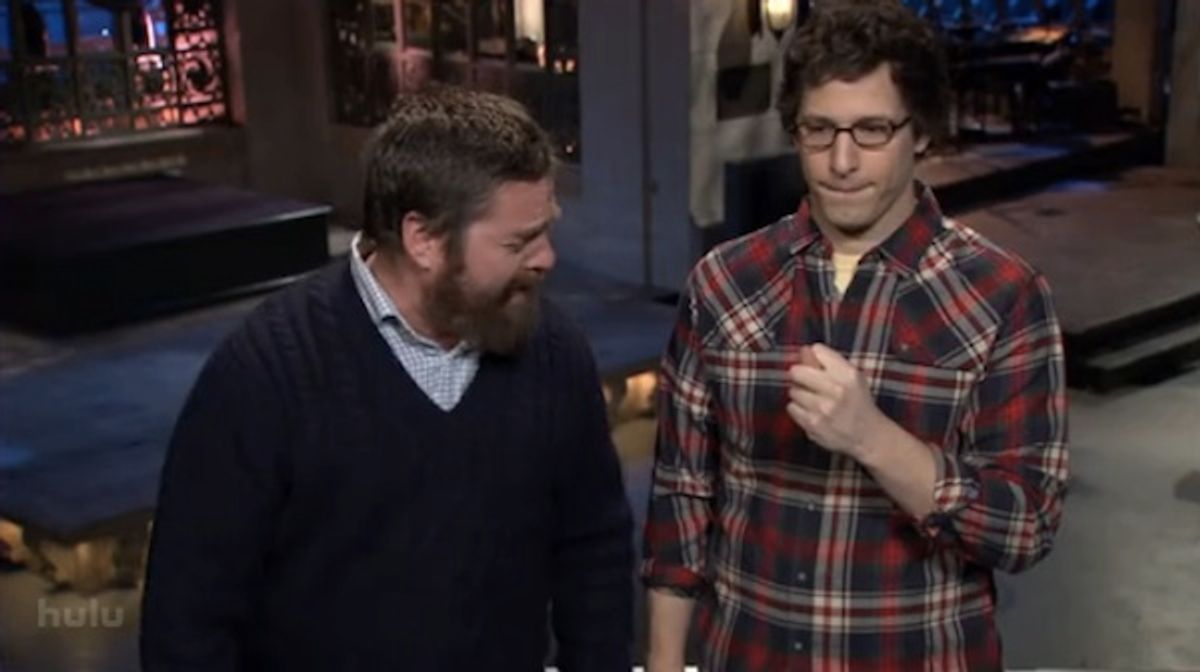 This week, Zach Galifianakis, the "somnambulist" star of "The Hangover" will host "Saturday Night Live." And I for one could not be more excited. I mean jeez, just look at his promo video with Andy Samberg!

As Gabe Delahaye on Videogum wrote, "Just the Zach Galifianakis promos for his episode of Saturday Night Live are better than most things that have been on the actual show this season."

That is true! The art of the promo is hard to master, especially when you know that NBC is just going to lump all those 5-second "bits" you had into one large commercial for the Internet viewers. But Zach kills it, especially in that whole end segment about *spoiler alert* losing his nose. Which I bet is very soft. Why, do you ask? Well, I don't mean to brag or anything, but one time I met Zach Galifianakis and he had very, very soft hands. I know because I shook them. I shook Zach Galifianakis' hands. And they were baby soft. Erego his nose is probably also soft and this was not just an excuse to talk about how one time I shook Zach Galifianakis' hand.

Anyway, plenty of people have tried to do great promo videos for "SNL" and only a few have a succeeded. Lets take a look.

I have no idea why it's funny but it is. Is this a "Brokeback Mountain" reference or something?

Contextually funny because in 2006, most of America would have honestly rather seen Carrot Top than this dude host "SNL."

See "Saturday Night Live" cast? This is how it's done. You don't always have to stand there and be cool-guy Andy Samberg. Sometimes you can make up a personality! It's your job!

Okay, I know. But the idea that James Franco might be everywhere, everyone, at all times (including Santa Claus!) must have been a revolutionary concept back two years ago!