After Japan's 8.9 magnitude earthquake, Hawaii, California and others brace for impact 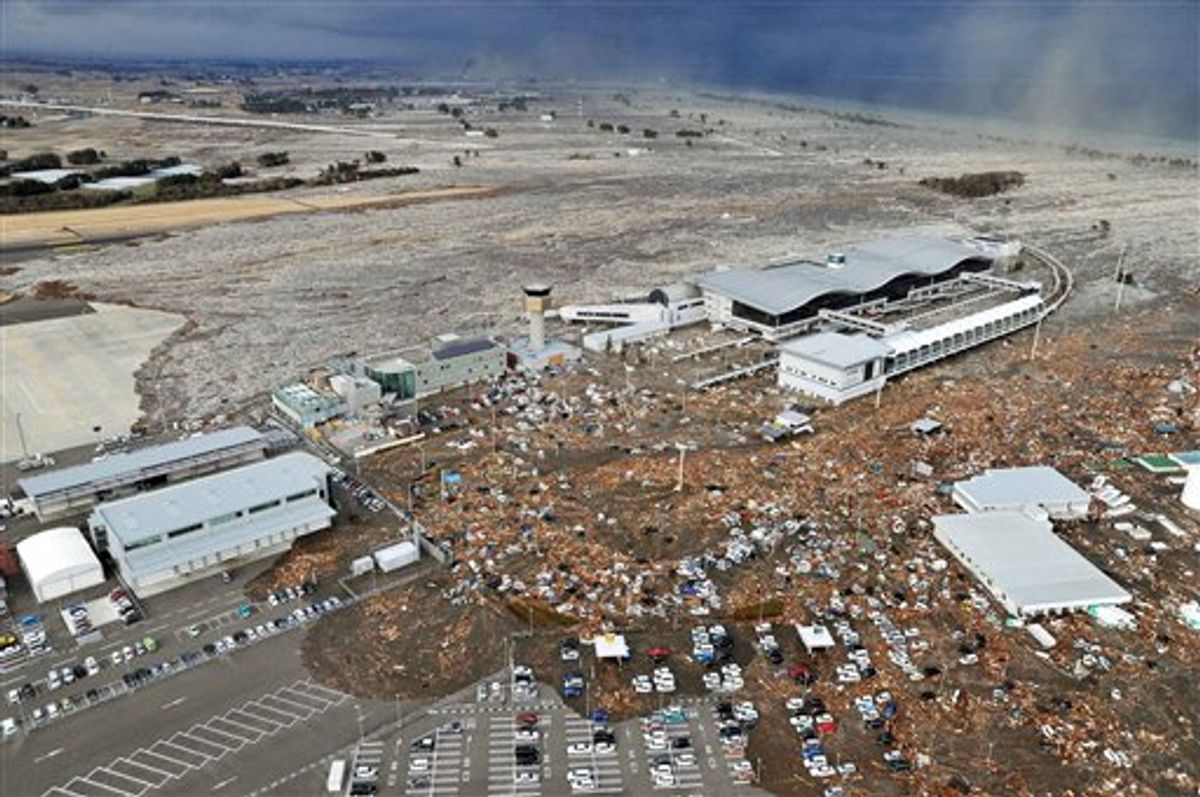 Tarmac, parking lot and surrounding area are covered with mud and debris carried by tsunami at Sendai Airport in Sendai, Miyagi Prefecture (state) after Japan was struck by a strong earthquake off its northeastern coast Friday, March 11, 2011. (AP Photo/Kyodo News) JAPAN OUT, MANDATORY CREDIT, FOR COMMERCIAL USE ONLY IN NORTH AMERICA (AP)
--

Tsunami waves spawned by a massive earthquake in Japan have hit Hawaii.

The Pacific Tsunami Warning Center says Kauai was the first island hit early Friday by the tsunami, which was quickly sweeping through the Hawaiian Island chain. Officials predicted Hawaii would experience waves up to 6 feet.

Residents in coastal areas of Hawaii were evacuated to refuge areas at community centers and schools while tourists in Waikiki were moved to higher floors of their high-rise hotels.

Roadways and beaches were empty as the tsunamis struck the state, which had hours to prepare. Watch live video here:

A tsunami spawned by a massive earthquake in Japan raced across the Pacific Ocean early Friday, pushing tourists to the upper levels of high-rise hotels in Hawaii and threatening to swamp low-lying areas of the U.S. western coast.

Sirens woke residents in the middle of the night in Hawaii, where the governor ordered the evacuation of coastal areas and warned residents to take the threat seriously. People waited in long lines stocking up on gas, bottled water, canned food and generators, and officials told residents to stock up on water and fill their cars with gas.

The first waves to hit Hawaii could reach 6 feet high and were expected to hit about 3 a.m. local time (9 a.m. EST.)

The tsunami slammed the eastern coast of Japan, sweeping away boats, cars, homes and people as widespread fires burned out of control. It's traveling at 500 mph -- as fast as a jetliner -- and likely won't change speed until it hits a large area of land, said Kanoa Koyanagi, a geophysicist for the Pacific Tsunami Warning Center.

Waves are predicted to hit the western coast of the United States between 11 a.m. and 11:30 a.m. EST Friday. People near the beach and in low-lying coastal areas of Point Conception in Santa Barbara County were told to move immediately inland to higher ground.

While the tsunami is likely to go around smaller islands, the size of Hawaii's islands will amplify the waves, which will crash hardest against harbors and inlets.

"We're preparing for the worst and we're praying for the best," said John Cummings III, spokesman for the Honolulu Department of Emergency Management.

The Honolulu International Airport remained open but seven or eight jets bound for Hawaii have turned around, including some originating from Japan, the state Department of Transportation said.

All harbors are closed and vessels were being ordered to leave the harbor.

The warnings issued by the Hawaii-based Pacific Tsunami Warning Center cover an area stretching the entire western coast of the United States and Canada from the Mexican border to Chignik Bay in Alaska.

In Alaska, a dozen small communities along the Aleutian Island chain were on alert. In Oregon, county officials in Oregon were assessing whether to sound sirens; waves in Brookings in southern Oregon could also hit 6 feet.

The tsunami was expected to hit the Northern Mariana Islands, a U.S. territory at 4 a.m. EST, but no big waves came. Waves about 2.6 feet high hit the beach in Saipan, and sirens still sounded in the empty streets.

Maria Mettao, who works at the front desk of the Hyatt Regency Saipan in the Northern Marianas, said hotel staff has been given the all-clear. Mettao said the hotel has allowed guests to leave from the higher floors where they had been evacuated.

In the Philippines, officials ordered an evacuation of coastal communities along the country's eastern seaboard in expectation of a tsunami following the 8.9-magnitude earthquake in Japan.

Disaster management officials in Albay province southeast of Manila say they ordered residents to move to designated evacuation sites that are at least 15 feet above sea level.

In Guam, authorities advised people to evacuate low areas of the U.S. territory and seek ground higher than 50 feet above sea level and 100 feet inland.

Australia was not in danger because it was protected by island nations to the north, including Papua New Guinea and the Solomon Islands, that would largely absorb any wave activity, said Chris Ryan, a forecaster at the National Meteorological and Oceanographic Centre, the Australian government agency that monitors the threat.

The warning was issued Friday at 3:31 a.m. EST. Sirens were sounded about 30 minutes later in Honolulu alerting people in coastal areas to evacuate. About 70 percent of Hawaii's 1.4 million population resides in Honolulu, and as many as 100,000 tourists are in the city on any given day.

Honolulu's Department of Emergency Management has created refuge areas at community centers and schools, and authorities on Kauai island have opened 11 schools to serve as shelters for those who have left tsunami inundation zones.

Streets cleared out across Hawaii with usually bustling Waikiki mostly free of any foot traffic, with police ordering every one into the hotels. At the hotels, visitors were evacuated to the third floor and higher.

"The situation we're confronting right now is unpredictable. We do not know how many waves are going to be coming," said Honolulu Mayor Peter Carlisle. "We do not know which wave, if any wave, causes the most damage and how long the series of waves can last. As a result of that, it is our responsibility to do those things which are absolutely essential to ensure that human life is saved."

A small 4.5-magnitude earthquake struck the Big Island just before 5 a.m. EST, but there were no reports of damages and the quakes weren't likely related, a geophysicist with the United States Geological Survey said.

U.S. Coast Guard rescue crews were making preparations throughout the Hawaiian Islands to provide post-tsunami support, with cutter and aircraft crews positioning themselves to conduct response and survey missions.

Dennis Fujimoto said the mood is calm but concerned on the island of Kauai while people readying for the tsunami.

There's long lines at gas stations, and at the Wal-Mart, one of the few places that was open to midnight, people were stocking up on supplies.

"You got people walking out of there with wagonloads of water," he said.