The Internet can't stop watching videos of the horrific earthquake and its aftermath. Why are we so fascinated? 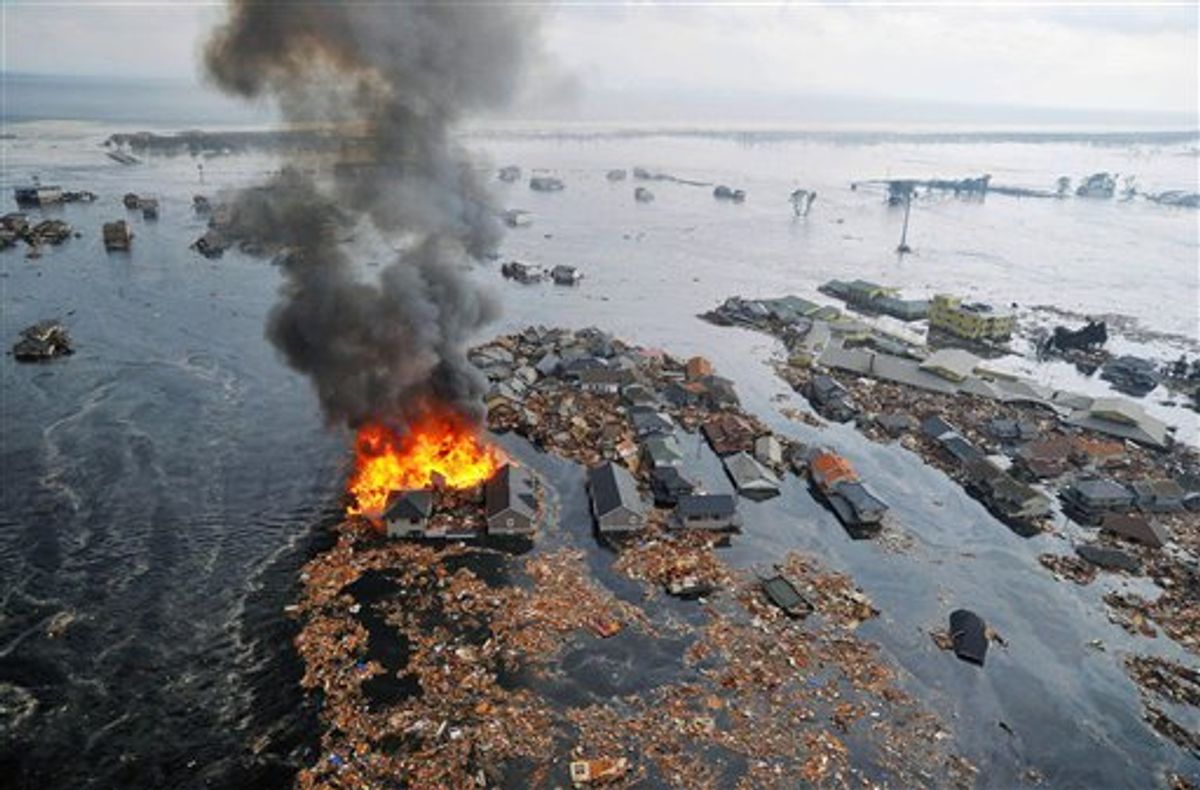 Houses swallowed by tsunami waves burn in Sendai, Miyagi Prefecture (state) after Japan was struck by a strong earthquake off its northeastern coast Friday, March 11, 2011. (AP Photo/Kyodo News) JAPAN OUT, MANDATORY CREDIT, FOR COMMERCIAL USE ONLY IN NORTH AMERICA, NO SALES (AP)
--

When the Indian Ocean earthquake and tsunami hit on Boxing Day, 2004, there was no YouTube or Twitter yet. Facebook was still mostly an Ivy League geek hangout. And images of the devastation were still mostly disseminated by the major news outlets. Even when a massive earthquake hit Haiti in January of 2010, the images coming out of the poorest country in the Western Hemisphere were scattershot. But when a relentlessly powerful 8.9 earthquake -- and series of havoc-wreaking tsunamis -- hit Japan on Friday, the one thing we didn't lack for was an overwhelming wealth of firsthand accounts and harrowing footage. In a very new and real way, devastation has gone viral.

On Twitter, the Earthquakes Tsunamis feed has been updating every few minutes since the first, chillingly plain-stated report of an earthquake off the east coast of Honshu came in. Today hashtags are mounting and the online community is scrambling, via Facebook and Twitter, to exchange both news and personal accounts. But it's the dramatic videos that are riveting the world today, and creating an already uneasy sense of horror and awe.

Why is there such an appetite for such terrible images? There is, after all, very little satisfaction to be gained in watching a wall of water cut a swath across the coastland.

Yet Gawker.TV raced Friday to put up "every amazing earthquake video" while Buzzfeed presented the "50 most incredible pictures of the Japan earthquake and tsunami." The latter also had a news clip of the devastation with the unfortunate boilerplate invitation to "Love it? Make it viral with your friends!" Most of the responses to it, by the way, have been "OMG," with a smattering of "Winning." Salon also posted a number of videos this morning. On YouTube, meanwhile, the option to "like" a refinery explosion seems incredibly wrong, even while the footage itself is undeniably compelling.

There may be a fair portion of the population that can't separate a truly ruinous tragedy from the kind of explosive spectacle you'd normally pay $11 a ticket for,

but as videos of the frantic shock of the earthquake continue to roll in to YouTube, it's clear that horror and horrible entertainment value don't stand in tidy opposition to each other. There's too much that's real and human suddenly at stake.

And though one commenter on Gawker remarked Friday, half-jokingly and half right on the money, that "I demand slow motion footage of this atrocity," it's not just gruesome curiosity, or an unempathetic OMG factor, at work here. There is something profoundly humbling about seeing how fragile we truly are, how swiftly and easily everything can be wiped out. The footage from Japan is indeed spectacular. It's also a wrenching memento mori, a reminder of our mortality. Because with each breath we take, all of us are just little boats in the whirlpool, hoping to hang on through the storm.