How to brown butter, and bake it into brownies

A classic technique to get more flavor out of butter, good enough to be a sauce on its own. Or to amp up brownies 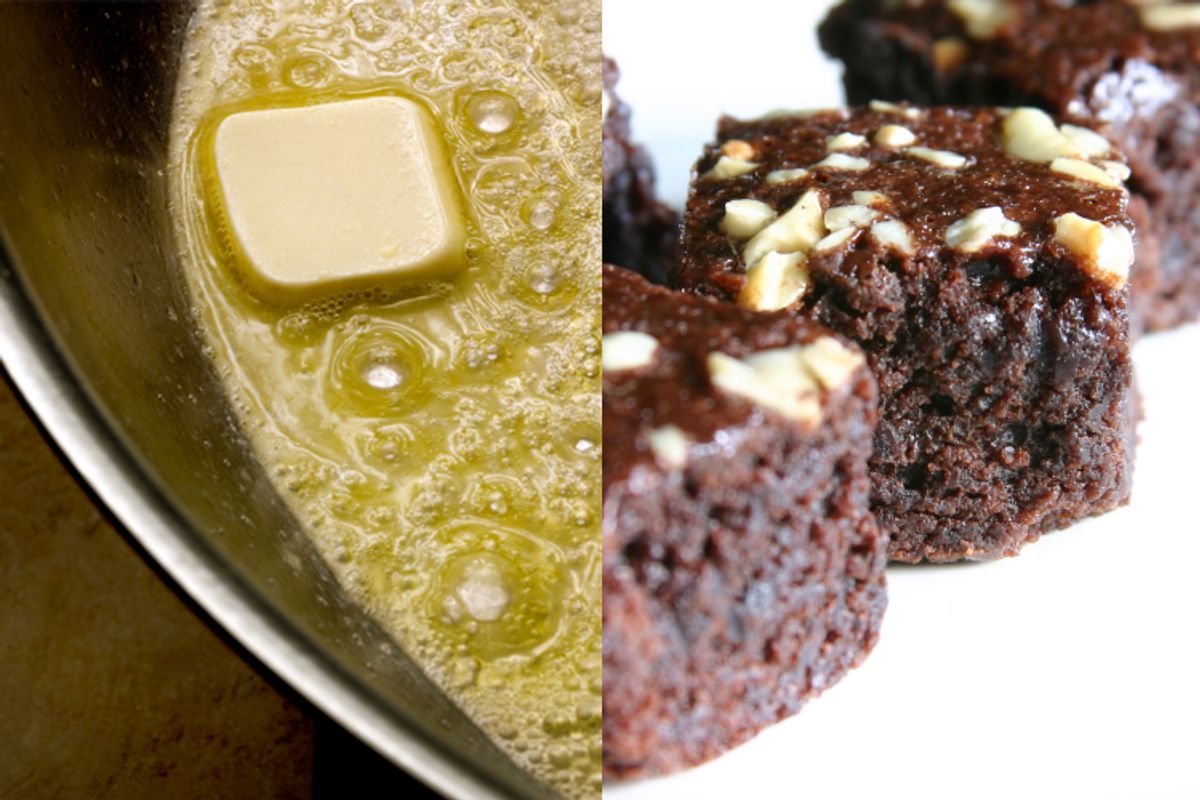 Today, we're going to talk about how to clarify and brown butter, but before we start, let's take a look at what's actually in butter. "Wait, what's in butter? Isn't butter just butter?" Pipe down, kids, we're about to talk about it. And no one likes it when you shout your questions just to make yourself look smart, Stanley.

So: If you look on the nutrition facts label of standard unsalted butter, you'll see that in one tablespoon (14 grams) of the stuff, there are 11 grams of fat. A little quick division, and you see that only about 73 percent of the butter is fat. (Actually, that's not correct either, since butter legally has to be 80 percent fat or more, but accepted rounding in the math lets the label show less fat, so as not to scare consumers.)

Anyway, the point is this: There's a lot in butter that's not butterfat. The vast majority of that is water, and then there are milk solids, which are mainly sugars and proteins. Normally, all those elements are emulsified together, but you see them break apart when you heat it -- ever notice how butter sizzles in a hot pan? That's the water boiling furiously out of it. That foaming? That's a mix of proteins trying to hold onto water that's desperately trying to escape. And then, of course, there's the browning.

Remember that the milk solids in butter are mainly sugars and proteins?

Brown butter is a wonderful, wonderful thing. Evocatively called beurre noisette (hazelnut butter) in French, it gives God's own grease a sweet, nutty flavor, turning in its smooth richness for one more liquid, dark and complex. It's a classic "sauce" nearly on its own when splashed with a little lemon juice or vinegar to brighten it, maybe with some shallots and capers to bring it up even higher, or some chopped nuts to accentuate its fatty goodness. Herbs like parsley, thyme or rosemary get all happy in there, too, chopped and tossed in at the last second. Spoon some on sautéed chicken, fish or pork, and you're in business.

But brown butter is one of those things that can turn on you in a second. It just gets more and more flavorful as it browns, until it hits some evilly magic point that turns it black, bitter and nasty. (There actually are uses for "buerre noir," but I tend to leave that napalm alone.) So for beginners, it's best to brown your butter slowly.

The safest way I've found to do it is this: Put a heavy, light-colored pan over medium heat. (Black-bottomed or nonstick pans make it hard to see the color.) Cut the butter into one-inch pieces, so that they melt and color evenly -- you don't want a big lump of butter still sliding around solid while stuff is already burning around it.

If you're using just a small amount of butter, there's really no mystery. Just let it get hot, foam and settle, and keep a close eye on the color of the milk solids at the bottom. Like caramel, the darker they are, the more complex the flavor, but the jump from dark to burnt is a shockingly quick one, so err on the side of safety. If you're using this is as a sauce, add your lemon juice or capers or whatever else immediately, as it will help to cool it down and set the color.

But if you're using a larger amount of Paula Deen's best friend -- as in the recipe below -- you can work it a little more precisely. I like to use a lower heat, more medium to medium-low, to get a nice even color. As the water in the butter eventually comes to bubble up and boil, be careful -- it has a tendency to splatter. Gently swirl the pan so that those bubbles dissipate a bit, and use a heatproof rubber spatula or spoon to clean up any early-browning bits along the side of the pan. (Don't throw them out -- just start adding them to whatever you're going to put the butter on or in.) Stir often while cooking. Eventually, you'll cook off the water, the milk solids will settle at the bottom, and the foamy proteins will look like a scum at the surface. You can skim it, if you'd like.

At this point, what you're doing is clarifying the butter, and if you keep the heat pretty low, all the water will eventually evaporate without the milk solids browning. What you'll be left with is crystal-clear pure butterfat. (It's great for sautéing and high-heat cooking that you can't normally do with butter.)

But let it keep going on the flame, and the solids will brown after a few minutes. Watch the pan. Once they turn a medium brown color, take them off; they'll keep coloring from the residual heat.

The brownies below are from a recent issue of Bon Appetit magazine, and are fantastic. Instead of using chocolate, the recipe calls for cocoa, letting you use brown butter as the fat, which flavors them with that subtle, round nuttiness. I've modified the recipe to crank up that brown butter flavor, using the milk solids from twice the amount of butter -- and you get to keep the extra!