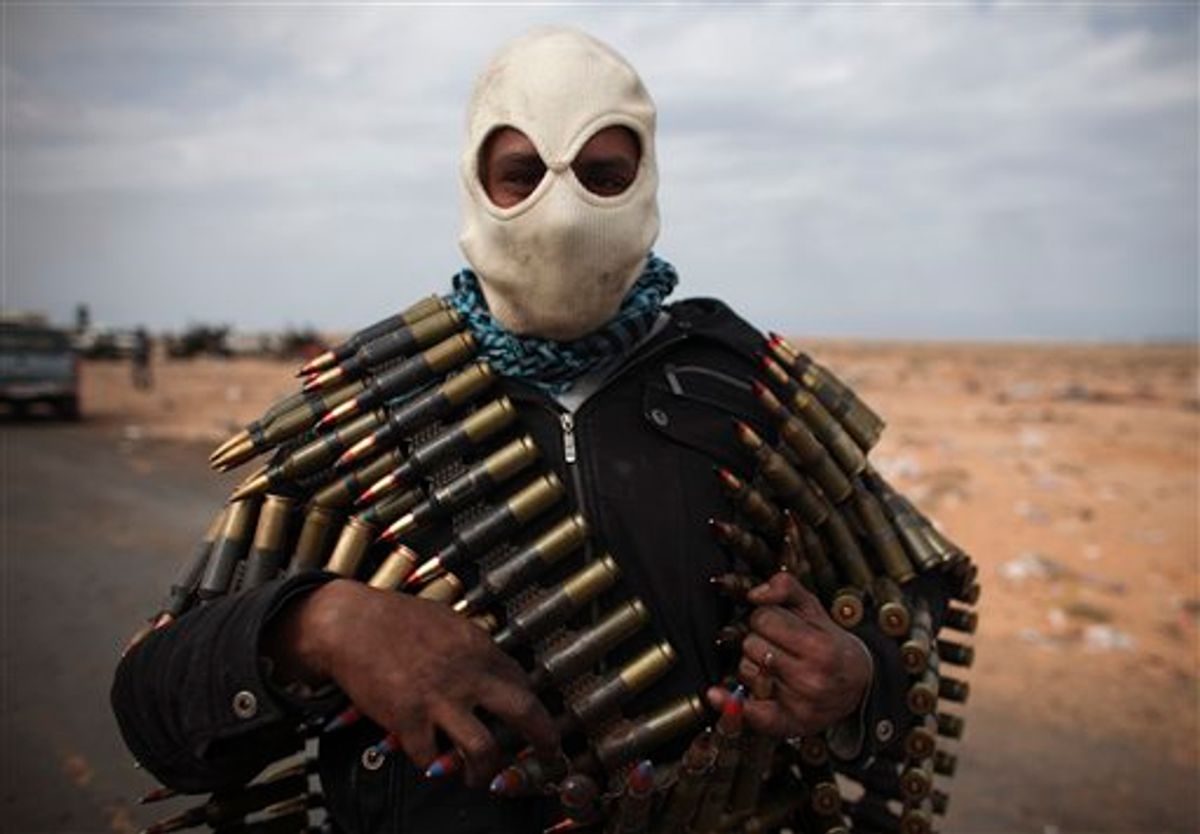 Rebels fighting to oust Moammar Gadhafi conceded Saturday that the regime had retaken a key oil port city and refinery and pushed the front line farther east, but they defiantly vowed to fight back as government forces gain strength.

The defeat at Ras Lanouf, which had been captured by rebels a week ago and only fell after days of fierce fighting and shelling, was a major setback for opposition forces who just a week ago held the entire eastern half of the country and were charging toward the capital.

Gen. Abdel-Fattah Younis, who was the country's interior minister before he defected to the rebel side, acknowledged that Gadhafi's forces regime had driven out pockets of rebel fighters and now control both the town and the oil refinery in Ras Lanouf, 380 miles (615 kilometers) southeast of Tripoli.

He also said government forces had advanced to 25 miles (40 kilometers) west of Brega, the site of a major oil terminal, suggesting the pro-Gadhafi troops were moving more aggressively because they needed gasoline.

Younis vowed a comeback, saying "we should be back today or at the latest tomorrow."

But fewer rebel supporters were seen by an Associated Press reporter in the area, suggesting morale had taken a hit as the momentum shifted in favor of the regime.

Mustafa Abdul-Jalil, the head of the opposition's interim governing council based in Benghazi, pleaded with the international community to approve a no-fly zone over Libya to prevent Gadhafi's forces from launching air attacks and to impose restrictions that would bar the longtime Libya leader from bringing in more weapons and foreign fighters.

The rebels also sent a delegation to Cairo to lobby for a no-fly zone as the Arab League held an emergency meeting to discuss the issue. The Arab League's member states are divided over how to deal with the Libyan crisis, signaling it would be a tough debate.

Rebel spokeswoman Tahani Suleiman said the group had met with Arab League Secretary-General Amr Moussa and he had promised to support the idea. That could not be confirmed, but Moussa was quoted in the German weekly Der Spiegel as advocating a no-fly zone, though he conceded it wasn't clear who would impose it and how.

"The Arab League also can play a role in this -- I would favor that," he said.

Asked if he supports an international intervention in an Arab country, Moussa replied: "you are talking about ... a military intervention. I am talking about a humanitarian action. It is about standing by the Libyan people with a no-fly zone in their fight for freedom against an increasingly inhumane regime."

The Arab League doesn't have executive powers to impose a no-fly zone, but its approval would offer regional support for such a move by the West. The 22-member organization represents most Arab countries in the region, including many led by autocratic rulers who so far have hesitated to condemn Gadhafi's harsh crackdown on the rebels.

The European Union, which has said any such decision would need sufficient diplomatic backing from the Arab League and other regional organizations, sent its foreign policy chief, Catherine Ashton, to Cairo for the meeting.

The Obama administration has said a no-fly zone may have limited impact, and there is far from international agreement on it.

It would require U.S. and possibly allies' aircraft to first attack Libya's anti-aircraft defenses, a move tantamount to starting war.

Gadhafi has warned the United States and other Western powers not to intervene, saying thousands in his country would die and "we will turn Libya into another Vietnam."

Government forces also have recaptured the strategic town of Zawiya, near Tripoli, sealing off a corridor around the capital, which has been Gadhafi's main stronghold.

Zawiya's main square, which had been a key center of resistance to the west of the capital, bore the scars of battle and the streets were lined with tanks as loyalists waving green flags rallied amid a heavy presence of uniformed pro-Gadhafi troops and snipers. There was talk of rebel bodies having been bulldozed away, and the dome and minaret of the nearby mosque were demolished.

The government had claimed victory in Zawiya, 30 miles (50 kilometers) west of Tripoli, on Wednesday, but the rebels who are seeking to oust Gadhafi said fighting was ongoing.

An Associated Press reporter, who was taken by the government with other journalists into the city on Friday, said the city was clearly in government control, with Libyan soldiers manning tanks and trucks mounted with anti-aircraft guns.

Grim evidence of battle was everywhere despite government efforts to clear the area. A makeshift clinic that had been set up inside the mosque to treat the injured was destroyed and the floor was covered with rubble, shoes and glass while the roof was punctured with a large hole where the dome had been.

The facades of buildings, including banks and hotels overlooking Martyrs' Square, were devastated, the streets were strewn with shattered glass and several palm trees had been burned or uprooted.

Associated Press writers Diaa Hadid in Cairo and Michael Michael in Tripoli contributed to this report.