We're on the fence about smoking in movies, Johnny Knoxville's new role and Justin Timberlake being single again 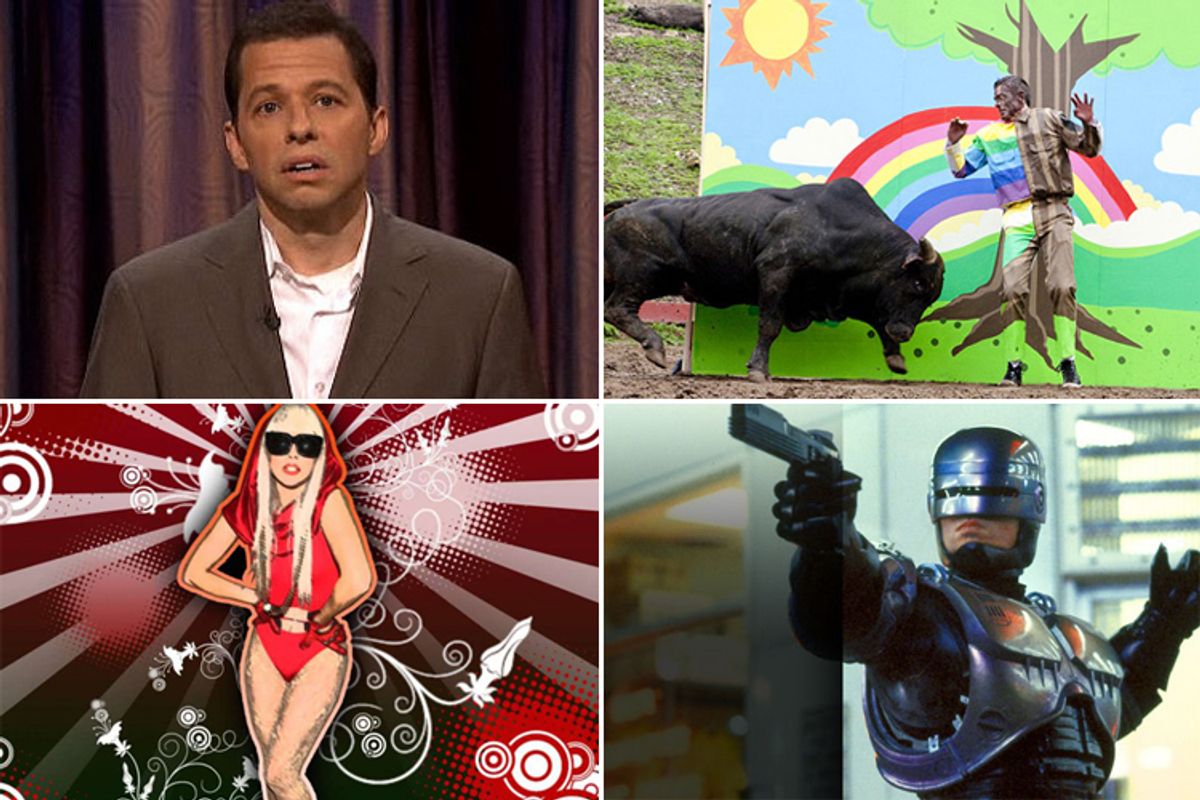 On the fence about Cryer, Gaga, and Robocop
--

Another week over, and we're this much closer to spring. What a joyous time of floods, tsunamis and 24/7 Charlie Sheen coverage. Amid all this chaos, we found the 10 pieces of news that struck both a good and bad chord in our pop culture psyche.

1. Johnny Knoxville up for the role of Moe in a "Three Stooges" remake: We're sure some people are going to scream sacrilege, but honestly that man has put his body through so much trauma that a couple of fingers in the eye would be a cake (in the face) walk.

2. "Robocop" gets a reboot: Is this our consolation prize for not being given a Robocop statue?

3. Jon Cryer's "It gets better" video for trolls: Way to be up on the LOLZ, Jon, but we still don't forgive you for turning Ducky into a sidekick for Charlie Sheen.

4. Lady Gaga ends Target partnership: Good for her, standing up for gay rights by pulling her lucrative deal with the conglomerate for giving money to anti-gay-rights politicians. If only she cared as much about non-unionized, underpaid employees at super chains … maybe then she wouldn't have made the deal in the first place.

5. Attractive people breaking up: Olivia Wilde is getting a divorce and might secretly be dating Ryan Gosling, who we thought was with Michelle Williams but I guess starring in "Blue Valentine" together turned out to be too depressing for their relationship to handle. Meanwhile Justin Timberlake and Jessica Biel have called it quits, rendering Biel even more irrelevant than she's been for the last five years.

6. Anonymous attacks Louis Vuitton: Last week Colbert, this week a clothing retailer? We feel like maybe these online vigilantes are just running out of targets.

7. Megan Fox and Mickey Rourke's straight-to-DVD film, "Passion Play": Sure, we can make fun of it now, but I guarantee you this will be a cult classic in less than a year.

8. Smoking is cool again: Thanks, Rango!

9. Gwyneth Paltrow über-fans: She was passable on "Glee," OK?  Not as good as the first time. But even more annoying than Gwyneth are her white-knight fans who jump down the throat of anyone who dares besmirch Gwynie's rep by saying that she was anything less than fantastic in every project she undertakes. Go buy some $80 pajamas and give it a rest, guys.

10. Tech nerds taking over SXSW: Formerly known as a music and indie movie mecca, Austin's culture-fest has turned into a desperate frowny-fest for guys hoping to make it big with their new app. You know you guys can't all become the next FourSquare, right?