As the crisis unfolds, the Nuclear Energy Institute joins an intense PR battle that has already started 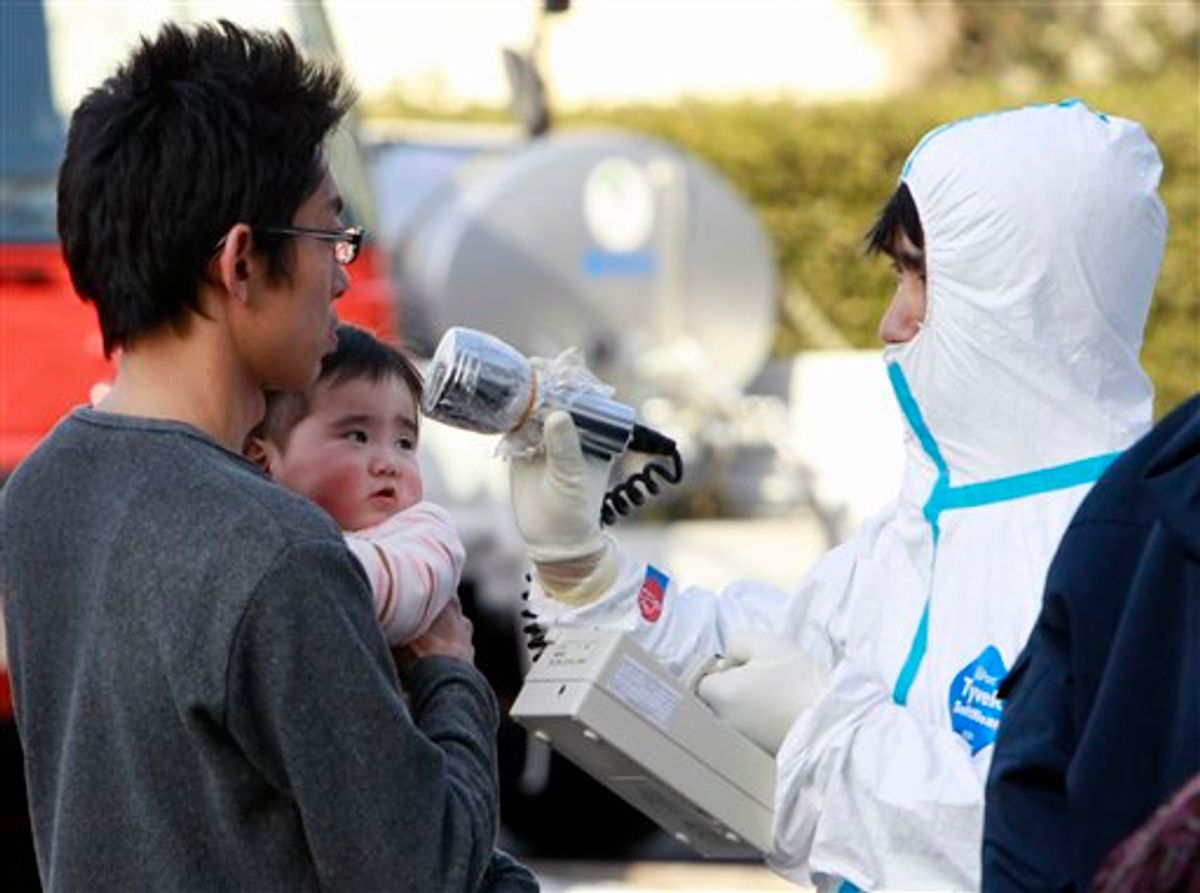 A man holds his baby as they are scanned for levels of radiation in Koriyama, Fukushima Prefecture, Japan, Sunday, March 13, 2011. Friday's quake and tsunami damaged two nuclear reactors at a power plant in the prefecture, and at least one of them appeared to be going through a partial meltdown, raising fears of a radiation leak. (AP Photo/Mark Baker) (AP)
--

(UPDATED) As Japan struggles to contain a growing nuclear crisis -- with more than 200,000 people evacuated, an explosion at one power plant, and possible meltdowns in several reactors -- the American nuclear industry faces a different challenge: how to position itself in the intense public-relations battle that has already started.

This morning I interviewed a spokesman for the Nuclear Energy Institute, the industry trade group, to get a sense of the message being pushed by an industry that, with support from President Obama as well as the Republican Party, has been in the early stages of a renaissance.

The most striking claim made by NEI spokesman Mitchell Singer: Americans should be "reassured" by the crisis unfolding in Japan.

"There hasn't been any significant release of radiation. So obviously they must be doing something right at this point," said Singer. While acknowledging that the crisis is still in early stages, Singer argued in our interview, and earlier to the Wall Street Journal, that Americans should be reassured because the industry will learn from the accidents in Japan, where fail-safe systems have themselves failed.

"We share what's known as 'lessons learned' from incidents such as this," he said.

As of midday Sunday, the New York Times reported that partial meltdowns had likely occurred at two reactors after backup cooling systems failed. Concern focused in particular on the Fukushima Daiichi plant in northeast Japan, where an outer containment wall was destroyed in an explosion Saturday. Roughly 150 people have reportedly been exposed to radiation near or inside the plant, though the severity of the exposure is unclear.

On Sunday, every major newspaper in the United States highlighted the nuclear crisis -- a PR nightmare for the industry.

The New York Times' front page led with a banner headline, "Japanese Scramble to Avert Nuclear Meltdowns," while the Washington Post featured stories variously labeled "Radiation Danger," "Reactor Emergency," and "Nuclear Crisis." Many press reports conclude that the current crisis is the worst since the 1986 Chernobyl disaster in what is now Ukraine, where an explosion spread a cloud of nuclear fallout over large sections of the Soviet Union and eastern Europe.

In the United States, the political backdrop for the Japanese crisis is a recent bipartisan embrace of nuclear power. President Obama last year announced $8 billion in loan guarantees for a pair of new reactors in Georgia. After more than 30 years of no new reactor construction in America, Singer said that four new reactors -- in Georgia, Tennessee, and South Carolina -- are expected to be online by 2020. Part of the reason for the three-decade lull was public fear generated by the Three Mile Island accident in Pennsylvania in 1979.

The industry -- along with President Obama -- has in recent years trumpeted the fact that nuclear power does not produce carbon emissions that cause climate change. But safety is clearly still a touchy subject for nuclear operators. A special section on NEI's website assures that "stringent federal regulation, automated, redundant safety systems and the industry’s commitment to comprehensive safety procedures keep nuclear power plants and their communities safe." The Wall Street Journal today has a tough story concluding that the Japanese experience has cast doubt on the very premise "that engineers can build enough redundancy into plant safety systems to overcome dangers."

"The Japanese plants have been run very safely and reliably for a very long time. They have operated quite safely," he said, adding: "Actually, they withstood the earthquake quite well. It's the tsunami that caused the problems with the backup generators."

UPDATE 3/14/11: NEI has a new statement in which they assert that the radiation release has been "minimal and controlled."