For some ambitious Republicans, President Obama's improving reelection prospects may not be bad news 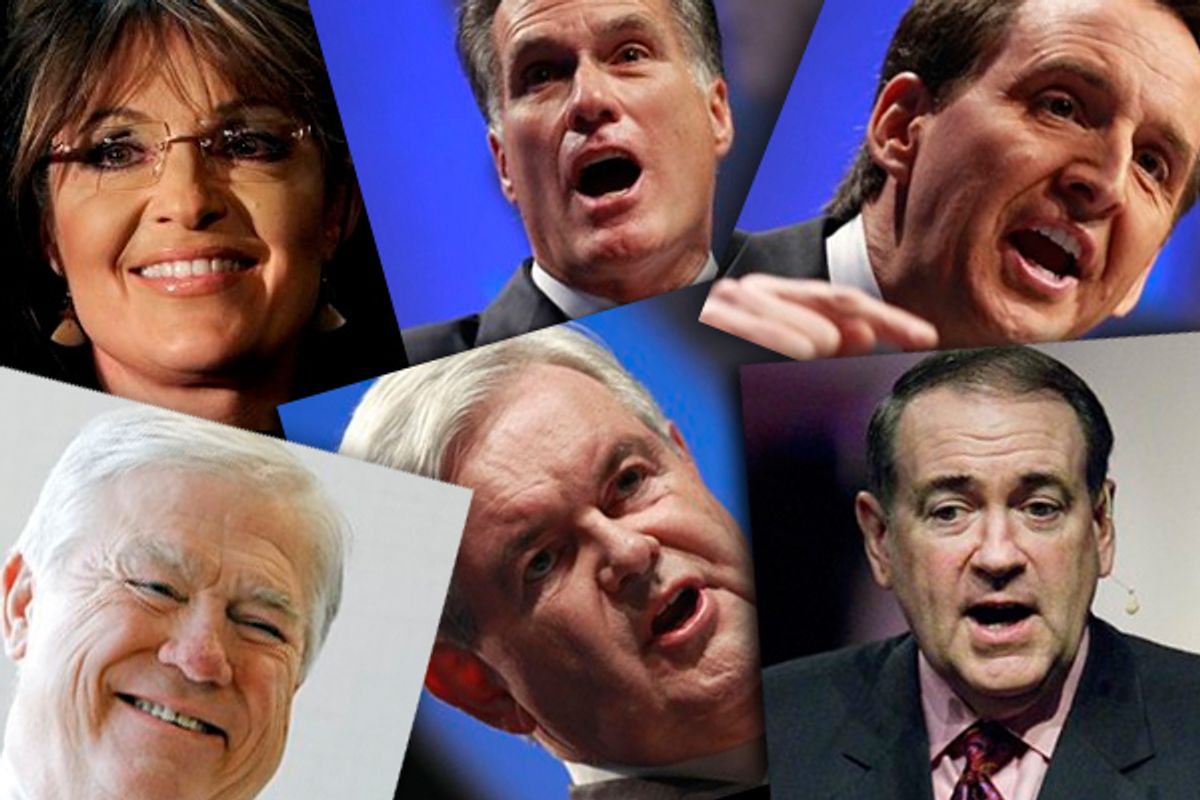 The Ides of March are almost upon us, but few potential 2012 Republican presidential candidates seem to have their eyes fixed squarely on the White House. As Salon's Steve Kornacki argued recently, the most obvious reason for the largely vacant GOP field -- sorry, Herman Cain -- is that the prospects of a Republican beating a once-again formidable Barack Obama seem rather bleak. The 2012 Republican nomination may be a prize not worth winning.

The first pattern is that the party of an incumbent president running for reelection to a second or even first full term wins about two-thirds of the time, whereas the incumbent party only wins about half the time when the presidency is an "open seat" with an ineligible incumbent. In the post-war presidential era, Gerald Ford, Jimmy Carter and George H.W. Bush lost their re-election bids, but Dwight Eisenhower, Lyndon Johnson, Richard Nixon, Ronald Reagan, Bill Clinton and George W. Bush all won. If you had to bet the house on who will be standing on the west steps of the U.S. Capitol building with his (or her) hand on the Bible on January 20, 2013, the smart money is on Obama.

Strongly related to this is another very powerful historical trend: the inability of either party to win the presidency thrice consecutively. Since 1952, that feat has been attempted six times but achieved just once, when Bush 41 won a "Reagan legacy" victory over Michael Dukakis in 1988. Presuming the first pattern holds and Obama wins a second term, history would then strongly favor the Republican nominee in 2016.

The third pattern involves capturing the Republican nomination. With the exceptions of Bush 43 and the highly unusual case of Ford, every GOP nominee in the post-Barry Goldwater era has run at least once and lost before eventually gaining the party's nod. Reagan, Bush 41, Bob Dole and John McCain all fell short in earlier bids -- two bids, in Reagan's and Dole's cases -- but each came back for a successful subsequent run.

Put these three patterns together, and '12 should be the ideal cycle for a Republican to run, lose, and then set himself or herself up to win the whole enchilada four years later. So who's best positioned to employ this lose-to-win strategy?

Candidates who ran and lost in 2008 -- including Rudy Giuliani, Mike Huckabee, Ron Paul and Mitt Romney -- could theoretically run and lose again, then still come back for a third, successful attempt. But third tries can be problematic; there's always the chance that after two failed runs, a candidate will be dismissed as a has-been. Indeed, if Romney wants to be president he will probably have to run, win the nomination and beat Obama right now. But because Obama's prospects are strong, the former Massachusetts governor is, in reality, perfectly positioned to be the GOP's sacrificial lamb in '12.

Sarah Palin, the only woman in serious consideration for '12, should also be set aside. Palin technically didn't run for president in 2008, but the founding Mama Grizzly has become such a national figure that the idea of her waging an icebreaking, run-to-lose presidential campaign in '12 to prime herself for 2016 is patently absurd. If she runs and loses the nomination in '12 -- or wins it and gets clobbered by Obama (as polls suggest she would) -- Palin's already dwindling electoral capital would take an October 1929-like nosedive. If and when she ever declares, hers has to be a one-and-done candidacy.

Thus, the subset of potential '12 candidates who would be true first-timers is limited to Michelle Bachmann, Haley Barbour, Mitch Daniels, Tim Pawlenty, Jon Huntsman, Rick Santorum, Donald Trump and Cain. In theory, the '12 cycle could be ideal for any or all of them to gain broader name recognition, cultivate supporters and donors, and test their messages with GOP primary voters and the national media with an eye toward '16.

But for the sake of both brevity and sanity, I hope you'll forgive me if I simply punt on considering Bachmann, Cain, Huntsman, Santorum and Trump as viable candidates in this or any future cycle. I'm also not including Newt Gingrich, who seems ready to convert his exploratory campaign into an officially announced one at any moment, even though '12 would technically be his first White House bid. But like Palin, the former House speaker is an old and familiar name in national politics, so the lose-to-win logic doesn't apply for him. Like Romney, Gingrich would have to run and win the whole thing now, or just wait until '16.

That narrows the field of run-to-lose prospects for '12 to two current governors and one former one: Mississippi's Barbour, Indiana's Daniels, and Minnesota's Pawlenty. All three can and should announce their presidential candidacies and then proceed to spend as much time introducing themselves to the kinds of voters who would be key to their hopes in '16: Midwestern suburban women for Barbour, southern conservatives for Daniels and Pawlenty, Mountain-state Mormons for all three. After intentionally but gracefully losing next year's nomination, each of them could then earn party plaudits by throwing their vigorous support behind the winner (Romney, presumably) -- while, of course, being smart enough not to accept any vice presidential offers.

Of the three, my sense is that Barbour has more than Daniels or Pawlenty to gain from a '12 run-to-lose candidacy. Barbour is an institutional guy with deep party roots, but also a former lobbyist and governor with a thick southern accent. In other words, he's the kind of pol who takes a while not merely to get to know, but to grow comfortable with. A follow-up effort after four years of doing retail work in the Republican trenches could serve Barbour very, very well in '16.

I should also mention Jeb Bush. There are two explanations for why he won't run in '12. The first is that he presumes that his brother's model -- and not his father's -- applies to him; that is, he thinks he can win the nomination on his first try. The second explanation flows from the first: If Bush can win the nomination on his first try, '12 is not the cycle to do it. So Bush might as well wait four years (during which time Bush family fatigue will presumably lessen). This also makes Bush the one person who could ruin a run-to-lose strategy for anyone who tries it in '12.

But who knows what Bush is thinking? For now, the bottom line for Barbour, Daniels and Pawlenty is: Go for it! You've got nothing to lose next year. Or, rather, you have everything to lose -- for now, at least.