After 1,000 bodies wash ashore, authorities believe the death toll could reach 10,000 in one Japanese prefecture 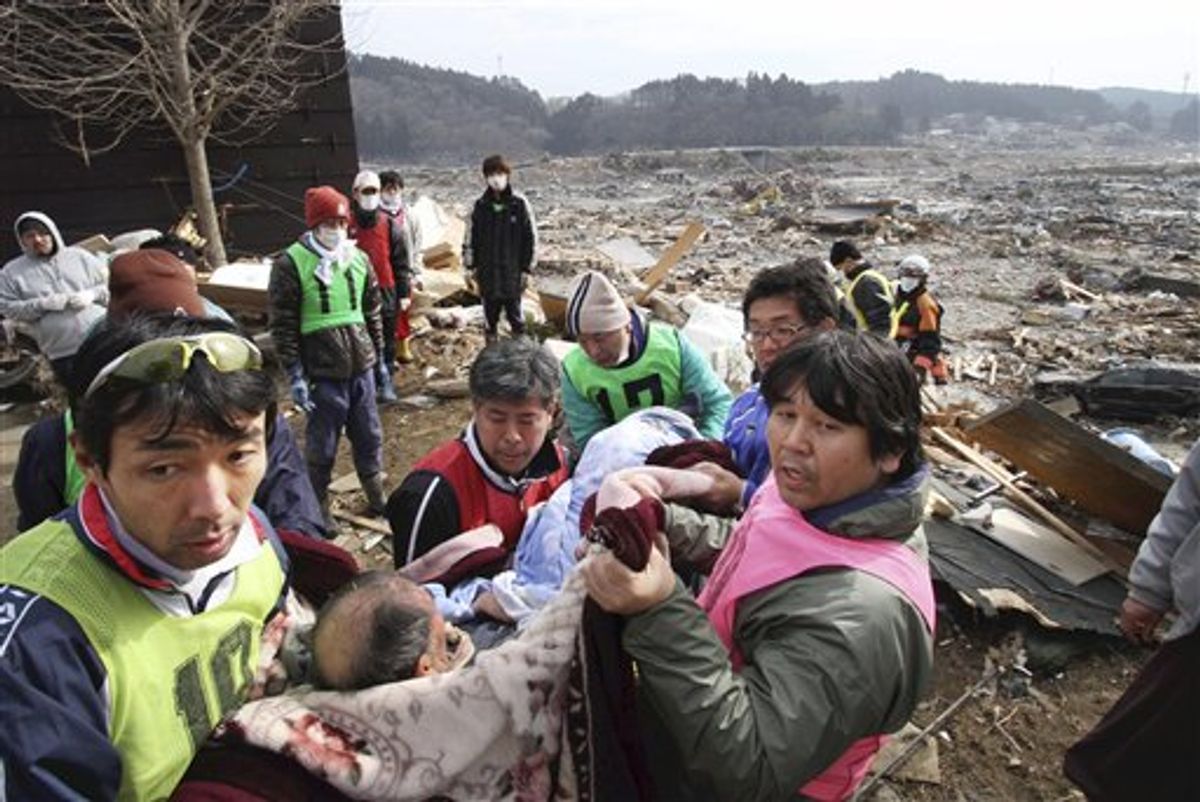 A tide of bodies washed up along Japan's coastline, crematoriums were overwhelmed and rescue workers ran out of body bags as the nation faced the grim reality of its mounting humanitarian, economic and nuclear crisis Monday after a calamitous tsunami.

Millions of people were facing a fourth night without water, food or heating in near-freezing temperatures in the devastated northeast. Meanwhile, a third reactor at a nuclear power plant lost its cooling capacity, raising fears of a meltdown, while the stock market plunged over the likelihood of huge losses by Japanese industries including big names such as Toyota and Honda.

A Japanese police official said 1,000 washed up bodies were found scattered Monday across the coastline of Miyagi prefecture. The official declined to be named, citing department policy.

The discovery raised the official death toll to about 2,800 but the Miyagi police chief has said that more than 10,000 people are estimated to have died in his province alone, which has a population of 2.3 million.

In one town in a neighboring prefecture, the crematorium was unable to handle the crush of bodies being brought in for funerals.

"We have already begun cremations, but we can only handle 18 bodies a day. We are overwhelmed and are asking other cites to help us deal with bodies. We only have one crematorium in town," Katsuhiko Abe, an official in Soma, told The Associated Press.

Friday's double tragedy has caused unimaginable deprivation for people of this industrialized country -- Asia's richest -- which hasn't seen such hardship since World War II. In many areas there is no running water, no power and four- to five-hour waits for gasoline. People are suppressing hunger with instant noodles or rice balls while dealing with the loss of loved ones and homes.

"People are surviving on little food and water. Things are simply not coming," said Hajime Sato, a government official in Iwate prefecture, one of the three hardest hit.

He said authorities were receiving just 10 percent of the food and other supplies they need. Body bags and coffins were running so short that the government may turn to foreign funeral homes for help, he said.

"We have requested funeral homes across the nation to send us many body bags and coffins. But we simply don't have enough," he told the AP. "We just did not expect such a thing to happen. It's just overwhelming."

The pulverized coast has been hit by hundreds of aftershocks since Friday, the latest one a 6.2 magnitude quake that was followed by a new tsunami scare Monday. As sirens wailed, soldiers abandoned their search operations and told residents of the devastated shoreline in Soma, the worst hit town in Fukushima prefecture, to run to higher ground.

They barked out orders: "Find high ground! Get out of here!" Several soldiers were seen leading an old woman up a muddy hillside. The warning turned out to be a false alarm.

Search parties arrived in Soma for the first time since Friday to dig out bodies. Ambulances stood by and body bags were laid out in an area cleared of debris, as firefighters used hand picks and chain saws to clear an indescribable jumble of broken timber, plastic sheets, roofs, sludge, twisted cars, tangled powerlines and household goods.

Helicopters buzzed overhead, surveying the destruction that spanned the horizon. Ships were flipped over near roads, a half-mile (a kilometer) inland. Officials said one-third of the city of 38,000 people was flooded and thousands were missing.

"I'm giving up hope," said Hajime Watanabe, 38, a construction industry worker, who was the first in line at a closed gas station in Sendai, about 60 miles (100 kilometers) north of Soma. Just then, an emergency worker came over and told him that if the station opens at all, it would pump gasoline only to emergency teams and essential government workers.

"I never imagined we would be in such a situation" Watanabe said. "I had a good life before. Now we have nothing. No gas, no electricity, no water."

He said he was surviving with his family on 60 half-liter bottles of water his wife had stored in case of emergencies like this. He walked two hours to find a convenience store that was open and waited in line to buy dried ramen noodles.

According to public broadcaster NHK, some 430,000 people are living in emergency shelters or with relatives. Another 24,000 people are stranded, it said.

One reason for the loss of power is the damage several nuclear reactors in the area. At one plant, Fukushima Dai-ichi, three reactors have lost the ability to cool down, the latest on Monday. Explosions have destroyed the containment buildings of the other two reactors.

Operators dumped sea water into the two reactors in a last-ditch attempt to cool their super-heated containers that faced possible meltdown. If that happens, they could release radioactive material in the air.

But Japan's Chief Cabinet Secretary Yukio Edano said the reactor's inner containment vessel holding the nuclear fuel rods was intact, allaying some fears of the risk to the environment. The containment vessel of the first reactor is also safe, according to officials.

Military personnel on helicopters returning to ships with the U.S. 7th Fleet registered low-level of radioactive contamination Monday, but were cleared after a scrub-down. As a precaution, the ship shifted to a different area off the coast.

More than 180,000 people have evacuated the area around the plants in recent days.

Also, Tokyo Electric Power held off on imposing rolling blackouts planned for Monday, but called for people to try to limit electricity use.

Edano said the utility was still prepared to go ahead with power rationing if necessary. The decision reflected an understanding of the profound inconveniences many would experience.

Many regional train lines were suspended or operating on a limited schedule to help reduce the power load.

Stocks fell Monday on the first business day after the disasters. The benchmark Nikkei 225 stock average shed nearly 634 points, or 6.2 percent, to 9,620.49, extending losses from Friday. Escalating concerns over the fallout of the disaster triggered a plunge that hit all sectors. The broader Topix index lost 7.5 percent.

Japan's economy has been ailing for 20 years, barely managing to eke out weak growth between slowdowns. It is saddled by a massive public debt that, at 200 percent of gross domestic product, is the biggest among industrialized nations.

Preliminary estimates put repair costs from the earthquake and tsunami in the tens of billions of dollars -- a huge blow for an already fragile economy that lost its place as the world's No. 2 to China last year.