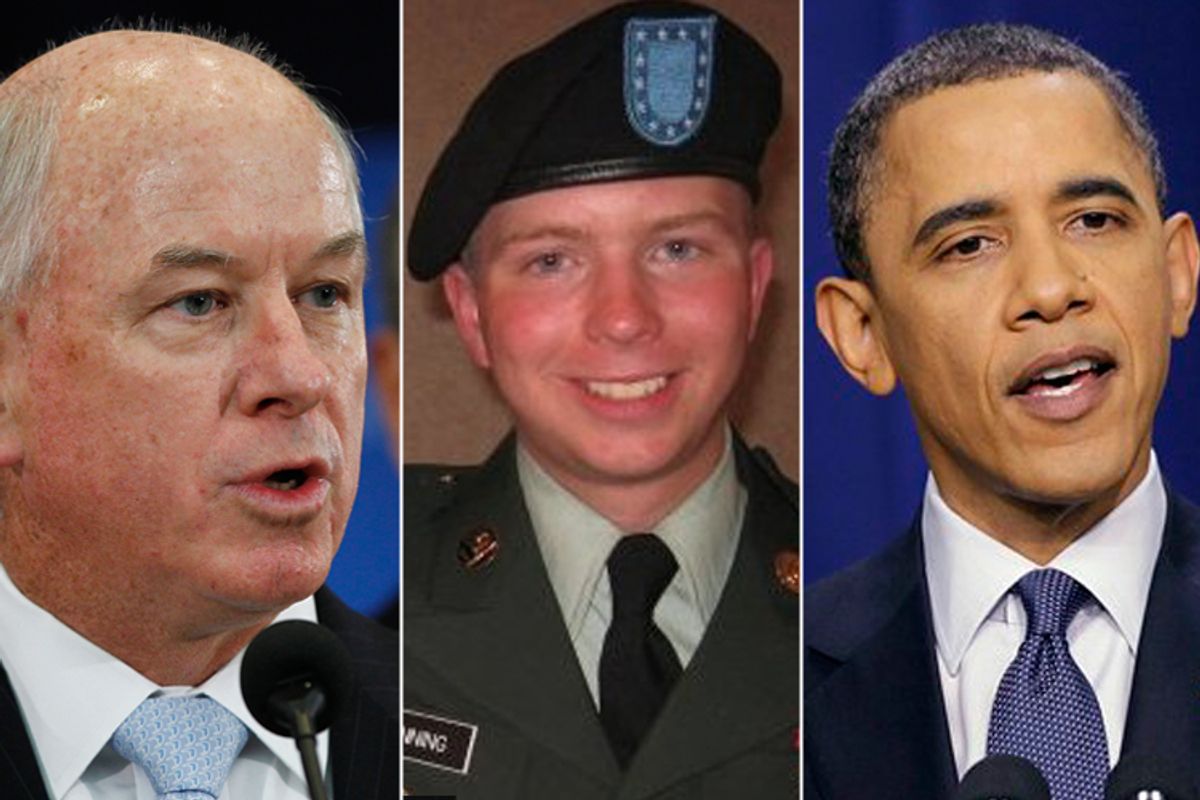 The forced "resignation" of State Department spokesman P.J. Crowley -- for the mortal sin of denouncing the abusive detention of Bradley Manning -- has apparently proven to be a clarifying moment for many commentators about what the President is and how he functions in these areas.  Writing at Time's Swampland, Mark Benjamin identifies the real crux of the controversy:

Free speech advocates are shocked, and, as I wrote last week on TIME.com, concerned over Obama's record as the most aggressive prosecutor of suspected government leakers in U.S. history.

It's long been obvious that the Obama administration's unprecedented war on whistleblowers "comes from the President himself," notwithstanding his campaign decree -- under the inspiring title "Protect Whistleblowers" -- that "such acts of courage and patriotism should be encouraged rather than stifled."  The inhumane treatment of Manning plainly has two principal effects:  it intimidates future would-be whistleblowers into knowing that they, too, will be abused without recourse, and it will break him psychologically (as prolonged solitary confinement and degrading treatment inevitably do) to render him incapable of a defense and to ensure he provides whatever statements they want about WikiLeaks.  Other than Obama's tolerance for the same detainee abuse against which he campaigned and his ongoing subservience to the military that he supposedly "commands," it is the way in which this Manning/Crowley behavior bolsters the regime of secrecy and the President's obsessive attempts to destroy whistleblowing that makes this episode so important and so telling.

Denunciations of the President from his own supporters are as intensive and pervasive here as they have been for any other prior incident, if not more so.  Matt Yglesias wrote that "to hold a person without trial in solitary confinement under degrading conditions is a perversion of justice" and that it's a "sad statement about America that P.J. Crowley is the one being forced to resign over Bradley Manning."  Andrew Sullivan -- writing under the headline "Obama Owns the Treatment of Manning Now" -- said that Crowley was forced out "for the offense of protesting against the sadistic military treatment of Bradley Manning," that "the president has now put his personal weight behind prisoner abuse," and that "Obama is directly responsible for the inhumane treatment of an American citizen."  Meanwhile, Ezra Klein previews his denunciation of the President's treatment of Manning and Crowley by announcing that it's his first ever lede "that isn’t about economic or domestic policy" but rather is "about right and wrong," and then questions "whether the Obama administration is keeping sight of its values now that it holds power."  Those strong words are all from supporters of the President.

Elsewhere, The Philadelphia Daily News' progressive columnist Will Bunch accuses Obama of "lying" during the campaign by firing Crowley and endorsing "the bizarre and immoral treatment of the alleged Wikileaks leaker."  In The Guardian, Obama voter Daniel Ellsberg condemns "this shameful abuse of Bradley Manning," arguing that it "amounts to torture" and "makes me feel ashamed for the [Marine] Corps," in which Ellsberg served three years, including nine months at Quantico.  Baltimore Sun columnist Ron Smith asks:  "Why is the U.S. torturing Private Manning?," while UCLA Professor Mark Kleiman -- who only last year hailed Obama as "the greatest moral leader of our lifetime" and eagerly suggested on Friday (before Obama's Press Conference) that Crowley was speaking for Obama -- mocked Obama's defense of the Manning treatment as "clueless on the Bush level" and now says of Crowley's firing:  "The Torturers Win One," while lamenting Obama's overt support for a policy that he calls "unconscionable and un-American and borderline criminal."

But the news isn't all bad for the President.  Aside from his shrinking though still-vocal The-Leader-Can-Do-No-Wrong loyalists (whose mirror image counterparts stood behind George W. Bush to the end no matter what he did), Obama is finding support for his conduct in the Manning/Crowley episode from the Far Right.  HotAir's Ed Morrissey, as but one example, lavishly praises the President's decisions:  "The White House acted appropriately in kicking Crowley out at State, and should be commended for taking quick action," and goes on to defend the conditions of Manning's detention as appropriate and necessary.  It really is quite striking -- and quite revealing -- how, at least in the areas about which I wrote most (civil liberties, secrecy, surveillance, privacy, war, due process, detention, etc. etc.), and for many of the specific controversies on which I've focused (WikiLeaks, Manning, indefinite detention, Afghanistan, drone attacks, the due-process-free assassination program, legal immunity for Bush officials, state secrets, etc.), the greatest support for the President's policies (with a few early exceptions) are found, by far, among the same faction of America's Right who so eagerly supported the Bush/Cheney policy framework.  That's just a fact.

When Obama was asked on Friday about Manning's treatment, he said in part:  "I've actually asked the Pentagon whether or not the procedures . . . are appropriate.  They assured me they are."  When George W. Bush, in his book, attempted to justify his torture regime, he wrote, as summarized by Newsweek's Jacob Weisberg: "When [Bush] asked 'the most senior legal officers in the U.S. government' to review interrogation methods, 'they assured me they did not constitute torture.' Case closed. You can't argue with the choices Bush defends in this book, because he doesn't argue them himself. He describes, asserts, and cites any authority handy, usually the authority he hired to defend his decisions" (h/t WLLegal).

When Anderson Cooper last month accurately described statements from the Mubarak regime as "lies," numerous colleagues of his criticized him for "taking sides," but then patronizingly suggested that he had likely lost his "objectivity" because he had been beaten by regime supporters in Egypt -- as though only being beaten could cause a journalist to become so emotional and reckless as to describe an official lie (from America or its allies) as a "lie."

Now, a similar tactic is being used to discredit Crowley and impugn the reliability his comments. Politico's Mike Allen, as he always does, conveys the Washington conventional wisdom today:  "Crowley is unusually sensitive to the treatment of prisoners because his late father, a B-17 pilot, was a prisoner of war for two years in a camp that at the time was part of East Germany."  In other words, one would object to abusive detention only if one were "unusually sensitive" because of some overwrought, emotional family issue; no rational, objective person -- with Beltway power -- could possibly find anything wrong with inhumane detention.  So Crowley is just a weird, emotionally affected outlier because of his "unusual sensitivity" to such matters.

Rep. Dennis Kucinich, a sitting member of Congress and member of the President's own party, has repeatedly sought to visit Manning and view his detention conditions, yet has been endlessly thwarted and given the runaround by Pentagon officials.  He talks about that situation in an interview with Scott Horton here (it includes a transcript).

Last Tuesday, in Santa Fe, New Mexico, I spoke at a newly inaugurated speakers series sponsored by the Lannan Foundation; the topic of my speech was WikiLeaks and the war against transparency.  The roughly 45-minute speech can be seen (or downloaded) here.  It was preceded by two introductions (the second of which, from radio host David Barsamian, quoted several passages from my forthcoming book), but the speech itself begins at the 9:35 mark; for those unable to watch all of it, the section of my speech discussing why WikiLeaks is such a vital battle begins at 41:30.  A 30-minute Q-and-A session hosted by Barsamian took place after, and it can be viewed or downloaded here.

UPDATE:  The New York Times has a good, new Editorial on Manning -- its first -- entitled "The Abuse of Private Manning," which, says the paper, "conjures creepy memories of how the Bush administration used to treat terror suspects."  The Editorial also lambasts Obama for supporting "an abuse that should never have begun."