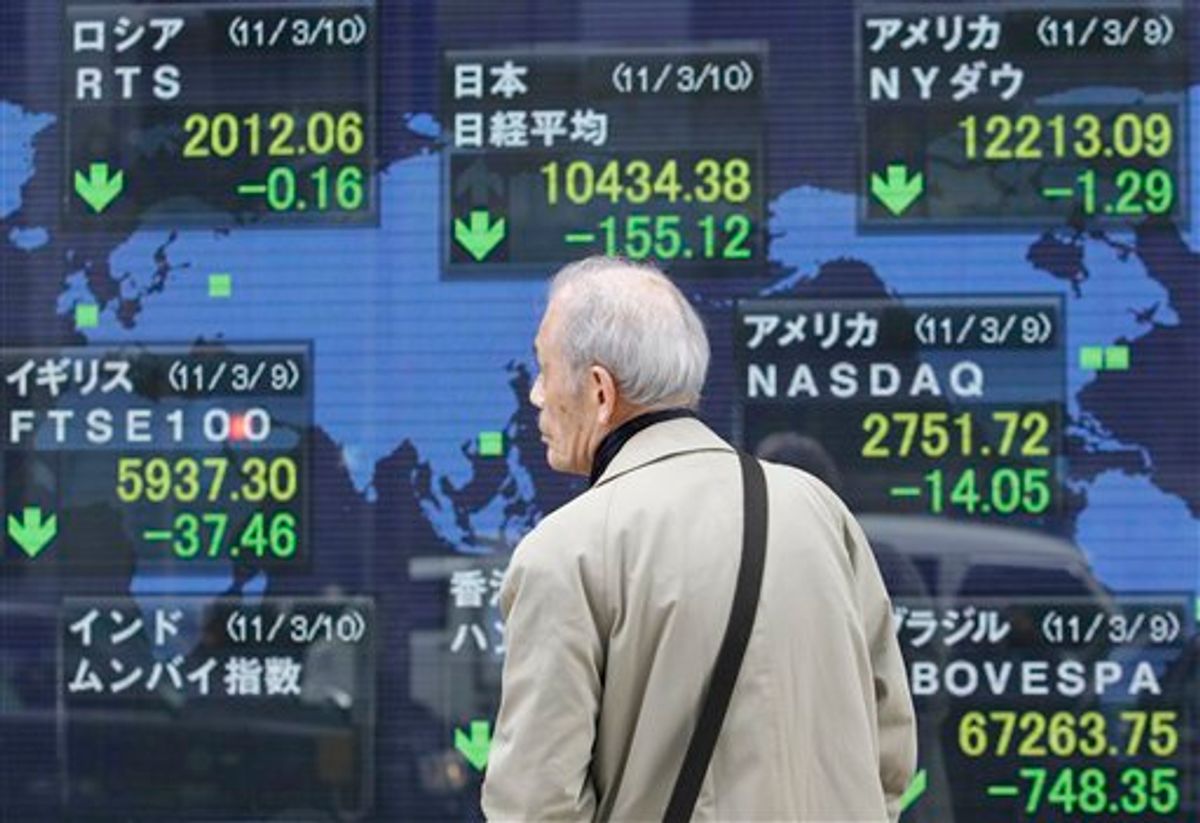 A man looks at a securities firm's stock board in Tokyo as Japan's Nikkei 225 stock average lost 155.12 points to close at 10,434.38 Thursday, March 10, 2011. Asian shares fell Thursday, weighed down by ongoing fighting in Libya and a larger than expected contraction in Japan's economy. (AP Photo/Koji Sasahara) (AP)
--

The Tokyo stock market plunged Monday, its first business day after an earthquake and tsunami of epic proportions laid waste to cities along Japan's northeast coast, killing thousands and potentially causing tens of billions of dollars in damage.

Developments elsewhere were more muted -- an indication that investors think the costs facing Japan may not spill over significantly. In Europe, sentiment was partly supported by the weekend agreement of a broad package of measures to ease the government debt crisis that has already forced Greece and Ireland into seeking bailouts.

However, most attention was centered on Japan, and how the world's third-largest economy is dealing with the catastrophic events of last Friday. Financially, the situation is made even more difficult by the fact that Japan's debt stands at around 200 percent of its national income and its economic recovery came to a grinding halt in the last three months of 2010.

The Bank of Japan was quick off the mark Monday, injecting a record 15 trillion yen ($183.8 billion) into money markets to try to defend the already fragile economy. By flooding the banking system with cash, the central bank hopes banks will continue lending money and meet the likely surge in demand for post-earthquake funds.

"It was certainly an emotion charged-day on Asian equities with breaking news circulating seemingly every few minutes ranging from record liquidity injections from the BoJ to further catastrophes at other nuclear reactors," said Chris Weston, a trader at IG Markets. "The end result was panic and indiscriminate selling."

In one of the most dizzying days for Japan's stock market since the 2008 financial crisis, the benchmark Nikkei 225 dived 633.94 points, or 6.2 percent, to close at 9,620.49 -- wiping out this year's gains and hitting its lowest level in four months.

Worries about the economic impact of Friday's disaster, including massive power shortages that could disrupt factories, triggered a broad sell-off that hit all sectors.

Tokyo Electric Power Co. nose-dived more than 23 percent as it struggled with malfunctioning nuclear reactors and a power shortage that led the company to warn it may need to ration electricity. And companies with nuclear power-related businesses registered staggering losses, including Hitachi Ltd., down 16.2 percent, and Toshiba Corp., down 16.3 percent.

Insurance companies -- many of which will likely face heavy claims for lost property and infrastructure -- also suffered sharp drops, including Tokio Marine Holdings Inc., down 12.4 percent. Cosmo Oil, whose refinery has been on fire since the 8.9-magnitude quake, slid by a withering 21.6 percent.

While Japanese shares sunk, the yen struck a new four-month high against the dollar thanks to its status as a safe haven for investors to park their cash. However, the Bank of Japan's announcement took the shine off during a day of volatile trading.

"The initial positive yen reaction likely reflects both a pick up in safe haven demand for the yen as broader market risk sentiment has deteriorated, and investors anticipating a pick up in quake-related yen supportive capital inflows," said Lee Hardman, currency economist at The Bank of Tokyo-Mitsubishi UFJ.

Meanwhile, the euro was 0.2 percent firmer at $1.3966, its fortunes bolstered somewhat by a surprisingly broad European package of measures to deal with the government debt crisis that has over the past year threatened the existence of the euro currency.

In an early Saturday announcement, eurozone leaders increased the size of the bailout fund -- the so-called European Financial Stability Facility -- and lowered the interest rates on the loans bailed-out Greece has taken out. They also revealed that the bailout fund can buy bonds directly from governments in exceptional circumstances but only if those countries agree to further austerity measures.

The deal helped support European stock markets despite the worries over Japan.

Stock indexes in Greece, Portugal and Spain rallied sharply. The FTSE 100 index of leading British shares was more or less unchanged at 5,827 while France's CAC-40 fell 0.2 percent to 3,922. German shares underperformed their peers partly because Germany is the country has the deepest coffers in Europe and will have to pay the lion's share of the revamped bailout facility. The DAX index was down 0.6 percent at 6,940.

Meanwhile, oil prices fell amid the uncertainty generated by the Japanese quake despite ongoing worries about how the crisis in Libya will pan out. Benchmark crude for April delivery was down $1.99 at $98.18 a barrel in electronic trading on the New York Mercantile Exchange.