What's behind the "worst music video ever"? 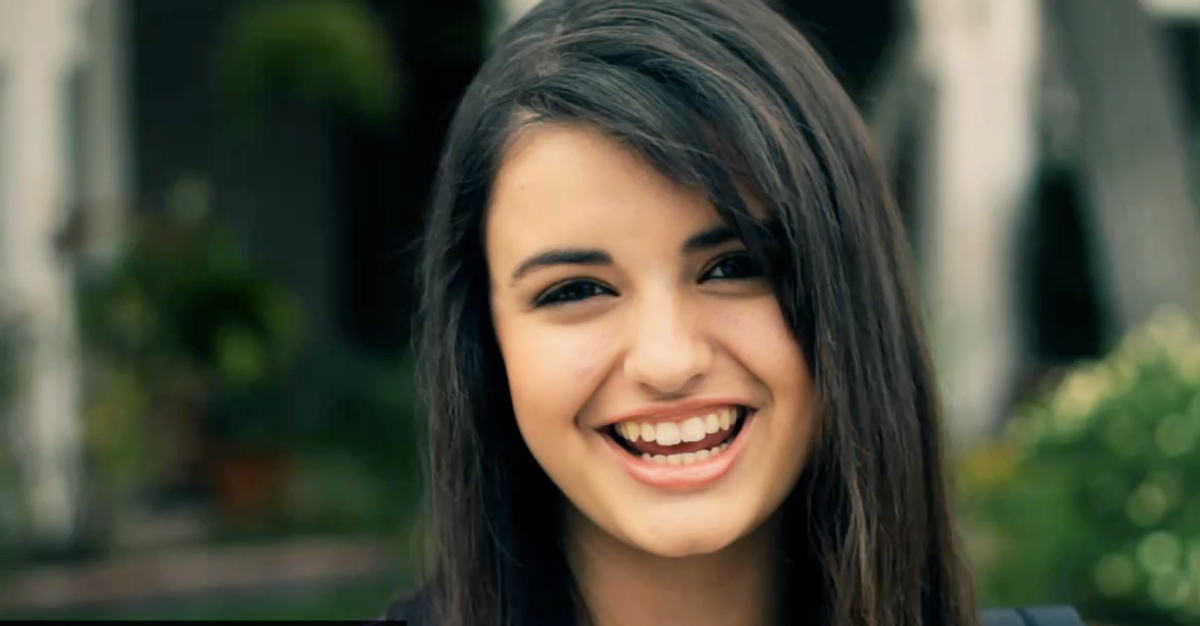 To get to be the most appalling thing on the Internet, you've got to be pretty bad. So, this weekend, when Slate's Farhad Manjoo tweeted that "This Is Literally The Worst Thing I Have Ever Heard," Gawker asked, "Is this the worst music video ever?" and Dlisted posted about a  "bullet to your sense of hearing," it was clear that Rebecca Black's "Friday" was something special. A viral meme was born -- and with it, the inevitable fantastic riffs.

Like any effective horror show, "Friday" seems innocuous -- almost innocent -- at first. But this is no mere off-brand Selena Gomez or Demi Lovato production. Somewhere around the second note of the eerily auto-tuned song -- and its equally unlifelike video -- it becomes clear that it's possible to create something that's an insult to Kidz Bop. With lyrics like, "Yesterday was Thursday, Thursday. Today is Friday, Friday. We we we so excited. Tomorrow is Saturday and Sunday comes ... afterwards" -- delivered in Black's dead-behind-the-eyes monotone, "Friday" will haunt your nightmares. Did I mention the tragic rap interlude, where a man with delusions of being Usher throws in a "Whooo!" and something about "passing a school bus"? I'll leave the final verdict on the whole thing to my 7-year-old, a child whose penchant for eating ChapStik suggests she may not have the most discriminating of tastes, who declared of "Friday" that "This is the worst," before stalking out of the room in disgust.

But remember how in "Alien" it was really scary because of the Alien, but in "Aliens" it was even scarier because there were a lot more Aliens? Here's the ominous thing about Rebecca Black -- she's just the tip of a horrible iceberg called Ark Music Factory. With its roster built almost entirely of very young, trying-very-hard girls, the recently launched company from producers Patrice Wilson and Clarence Jey emits a distinctly "Toddlers and Tiaras: The Next Generation" vibe. What good can ever come of a company that uses comic sans for its artist profiles?

And if you're congratulating yourself for making it through "Friday," I challenge you to endure Ariana Dvornik's "Fly Away," Kaya's ultra-lite Britney routine in "Can't Get You Out of My Mind," or 11-year-old CJ Fam's full-on creepy "Ordinary Pop Star" -- in which the little dynamo belts about the travails of fame while the grown-ups stop just shy of leering. See? Ke$ha only makes it look easy. Just go to the label's YouTube channel – if you dare. There's a RAP REMIX of "Friday."

In Hollywood, you can find someone to encourage your aspirations, no matter how far-fetched they may be, no matter how woefully underprepared you are for a real career. And the quest for younger and younger "talent" -- combined with the hunger of the kids and no doubt their families -- makes for a perfect storm of mediocrity and future broken dreams.

Everybody has to start someplace, and someday even Rebecca Black might be able to carry a tune. But watching the parade of shiny, glittered-up, aggressively smiling kids at Ark's launch party video from last month, it's hard to see anything but desperation for attention, and a "Factory" willing to encourage it. And the only thing more horrifying than Rebecca Black's terrible "Friday" is the sad, easily exploited longing for fame she represents.