Should comedy worry about its shelf life? 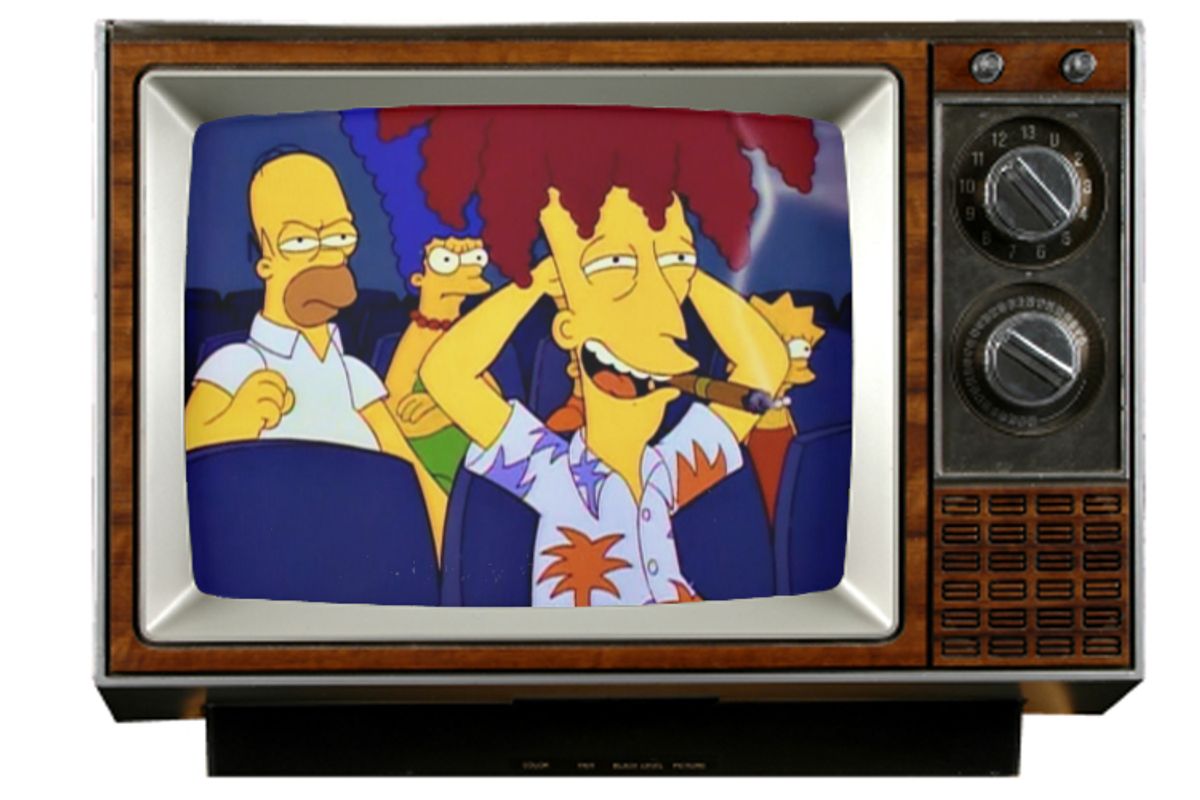 Homer, Marge and Sideshow Bob in "The Simpsons."
--

When a comedy builds a lot of its identity around pop culture references, is it hastening its own irrelevance? I asked that question last week in a TV column centered on a handful of new series (mainly "Glee," "Community" and "Chuck") and a classic show, "The Simpsons," 22 years old and counting. The piece sparked many rebuttals, excerpts from which are collected here.

The piece started with an anecdote about watching a fourth-season episode of "The Simpsons," "Krusty Gets Kancelled," with my kids. Upon hearing me laugh at a particular gag -- action star Rainer Wolfcastle telling "Springfield Squares" host Kent Brockman about his new film, in which a man visits his son at college and is horrified to discover that he has become a nerd -- my 7-year-old son laughed, too. Then he asked, "Dad, why is that funny?" I realized my reflexive laughter was generational. I'm in my early 40s, and the joke presumed thorough knowledge of pop culture made within my lifetime, much of it arcane. I realized the entire episode -- one of the greatest of all "Simpsons" episodes, without question -- was so strongly rooted in pop culture trivia that "if it were a poem, it would need to have nearly as many footnotes as 'The Waste Land,'" and that "the further away from its original air date we get, the truer that's going to be."

So many sitcoms from the post- "Simpsons" era are like that: "Seinfeld," "Friends," "Family Guy." I called them "footnote shows" -- programs built around references that feel universal and timeless to viewers of a certain age only because it's what they grew up with.

Comedy writers needn't feel obligated to make every joke and every episode a monument to the eternal verities; sometimes the audience is just looking to unwind after a long day, and a Britney Spears impression or a Charlie Sheen joke is all they want or need, and that's fine. And pop culture references are not an inherently bad thing, of course, and I said that in the piece. And yes, it's true, all entertainment -- all art -- dates eventually. We don't look at a Rembrandt painting or listen to a Miles Davis record and assume they were made last week.

But hopefully there's something about the work that transcends the time in which it was created, otherwise it's ephemeral, disposable. I probably singled out "The Simpsons" because it's considered a pantheon series, a great and presumably lasting work. And during the first half of its run, it did have certain timeless qualities. The pop culture references were dense and sometimes deep, but there also frequent references to mythology, ancient history, biblical scripture, opera, Broadway musicals, painting and literature: Shakespeare, Vincent van Gogh, Gilbert and Sullivan, Edgar Allan Poe, Mark Twain, you name it. And the best episodes weren't just a bunch of riffs strung together. There was a coherent, often scathingly funny vision of American life at the core of the series, as well as an intuitive, honest portrait of family and community and human nature; the gags were just wonderful embroidery. But in the last decade, the embroidery has taken over "The Simpsons" -- and just about every other TV comedy of any profile that came after it. The only hugely popular half-hour comedy that escaped this fate is CBS' "Everybody Loves Raymond," which modeled itself on pre-1970s comedies and consciously strove to avoid topical references altogether.

In a piece titled "Rest Assured, Your Kids Will Get 'The Simpsons,'" Atlantic blogger Ray Gustini offered a list of five episodes he believed would not date, including "Das Bus," which Gustini describes as "'Lord of the Flies' recast with the children of Springfield elementary. Without the book, we wouldn't have the episode, which means we wouldn't have the best last line in any fictional work, ever. Luckily, William Golding is still required high school reading."

But other writers took issue with the implication that comedy should strive to be anything but funny in any way that it can, using whatever material is handy.

"Worrying about whether future generations will find a joke funny seems like the perfect way to stifle anyone's ability to produce something hilarious," wrote Halle Kiefer of SplitSider. "Beyond that, the value of comedy specifically has often been its immediacy; why wouldn't we want writers to make jokes that are relevant to their current audience? The reality is that comedy, or any kind of art, doesn't have to be enduring to be worthy. Additionally, we're selling kids short by assuming that not understanding a comedic reference will ruin their enjoyment of an entire episode, or movie, or cultural moment in time."

A couple of writers thought my anecdote about "Krusty Gets Kancelled" disproved my own point. They said the mere fact that I was watching a 1993 episode of "The Simpsons" in 2011 and laughing at it with my 7-year old proved it was, if not timeless, then certainly durable, pop culture references and all.

In a Macleans article titled "Everything Gets Dated," Jaime Weinman says there's almost "nothing" TV series creators can do to keep a show from seeming dated, because "almost everything is an era artifact to some degree or another ... They become period pieces anyway. Carl Reiner likes to boast about how he kept topical jokes to a minimum on 'The Dick Van Dyke Show,' but that show is the ultimate Kennedy/Johnson era time capsule for the hair, the look, and the attitudes encoded into it (like the unquestioned assumption that a talented performer like Laura will give up performing once she gets married)."

Chris Holden of Charge Shot!!! wrote, "The worst sin of the pop culture nerd is to automatically assume that something is funny by mere fact that there's an obscure cultural reference," and cited "Family Guy and "South Park" as frequent offenders. But he went on to take issue with the idea that the pop culture references, however plentiful, would necessarily overwhelm a comedy episode, and speed its march toward irrelevance.

"I don't buy Seitz' argument that this encyclopedic brain is necessary to understand these jokes on ['Krusty Gets Kancelled']. For one thing, these jokes come so quickly that, even if you miss one, there's going to be three more in the next ten seconds. Background knowledge of Arnold Schwarzenegger and 'Kindergarten Cop' would certainly extend the appreciation of the gag, but it's certainly not necessary."

Holden adds, "I've been rewatching old 'Seinfeld' episodes, and while there are references to Murphy Brown and C. Everett Koop, Kramer's physical comedy remains funny regardless of what era he's in."

The headline of a piece by Entertainment Weekly's Darren Franich asked, "Will 'The Simpsons' still be funny when no one gets the references?" His conclusion: "Short answer: Yes, with an 'if.' Long answer: No, with a 'but.'" Franich continues:

"The ’90s-era 'Simpsons' episodes weren’t funny because of the references — they were funny because the writing was snappy, the characters were fully-realized, and the individual episode plots were structured so well. There was wordplay, and farce, and topical satire. (There was also just outright silliness — see Sideshow Bob getting hit by all those rakes.) The references were the icing, not the cake. Also, it’s worth considering that not all referential humor is created equal. Most episodes of 'Family Guy' are filled with scattered pop culture tangents, which can bring a pleasant 'A-Ha!' feeling if you’re aware of what’s being referenced. But the Christmas episode of 'Community' was funny even if you had never seen the claymation 'Rudolph, the Red-Nosed Reindeer,' because the show had a point to make: About Christmas, about friendship, and about Abed’s specific character arc."

Todd VanDerWerff, a columnist for the Onion A/V Club and a former colleague of mine at The House Next Door, discovered that some of my concerns about "The Simpsons" also applied to the wonderful Simon Pegg-Jessica Stevenson-Edgar Wright sitcom "Spaced," which VanDerWerff sees as the forerunner to NBC's pop-culture-saturated and very self-aware "Community." Fans of 'Spaced' have taken VanDerWerff to task for "not sufficiently putting myself in the headspace of someone who was watching the show for the first time in 1999 or 2001." He continues:

"And, yeah, I haven’t been doing that. Part of that has been because this series is putatively about someone watching the show for the first time in 2011 and seeing how it holds up (quite well, thank you). But another part of that is because no one can ever experience some piece of pop culture all over again and feel the impact of what it was like at the time when it first came into being. I can remember the hubbub that surrounded 'The Matrix' or the 'Star Wars' prequels. I can remember just how big 'The X-Files' was at the time. But I can’t re-experience those emotions, nor can I suddenly feel what it was like to stumble upon 'Spaced' in the middle of the night on the tube and realize that these people were talking directly to you. 'Spaced' now comes with expectations—expectations a British friend of mine argues have damaged the show, since it creates the idea that this is something more than just a silly comedy—and it’s impossible to entirely set those expectations aside, to pretend it’s 1999 or 2001 all over again."