When "What It Feels Like for a Girl" was banned on MTV for violence, a chain of pop homages ensued 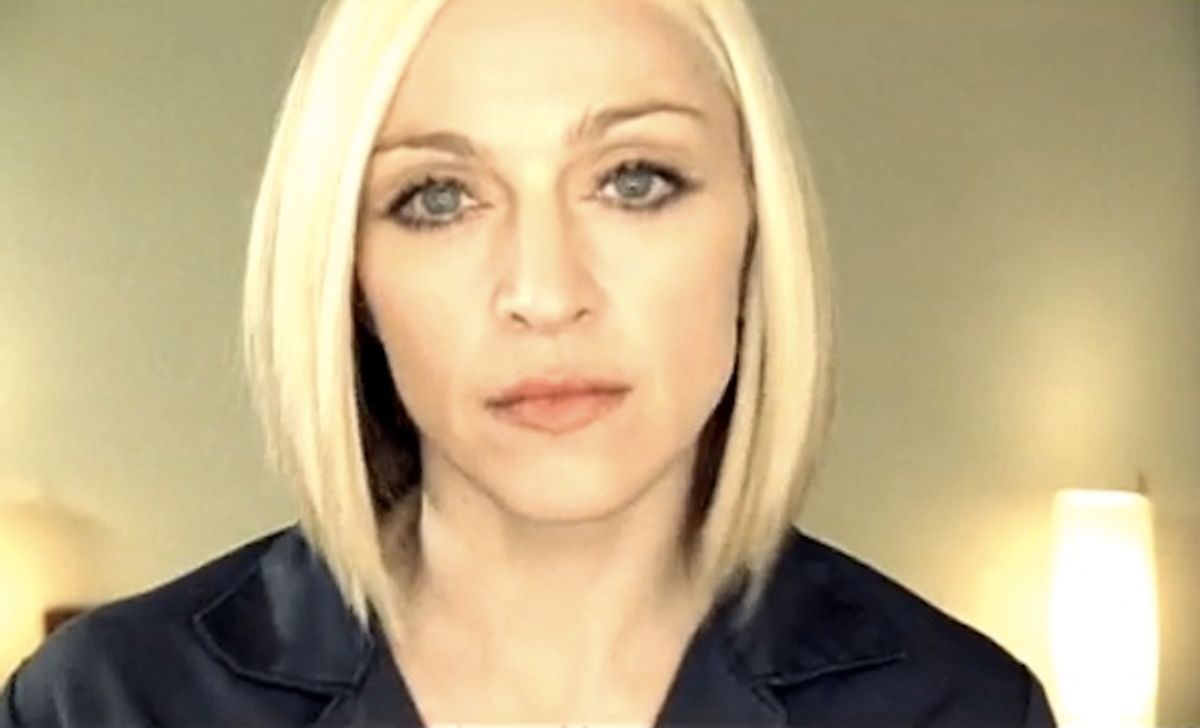 10 Year Time Capsule is a regular feature in which we look at what was happening in pop culture exactly a decade ago.

In 2001, Madonna needed to prove she could still shock the world. After all, she was no longer a material girl: She was a 43-year-old material woman, married to a British director and with a couple of kids to call her own (or other, equally ridiculous names). And as Baby Jane and Norma Desmond knew, there's nothing punk rock about a former star aging bitterly in her giant mansion.

So in 2001, Madonna picked herself up, brushed off her last two pop albums, and went on tour for the first time in two decades. The Drowned World tour didn't play to her hits from "Ray of Light" or "Music" and seemed less about pleasing her fans than proving something to herself. As Catherine McHugh wrote in her review of a performance, titled "Madonna's Dark Side":

She arrives via a "spaceship," perches in a 24'-tall aluminum tree before flying through the air on cables á la Crouching Tiger, Hidden Dragon, rides a mechanical bull (surrounded by plastic-wrapped bales of hay), pops out of a spinning, 3,800lb "poof chair" set piece with upholstered, three -- walled dance ramps that peel open on hinges and serve as dance space, and -- perhaps most notably -- accompanies herself on guitar for several songs.

(Side note: I wonder if Madonna wakes up every morning and wishes she never left Lady Gaga in a basket in front of that orphanage.)

If that weren't enough of a reaction against MILF-hood, she proceeded to recapture some of the bad girl spirit of her early days by making a video with her husband, Guy Ritchie, for her song "What It Feels Like for a Girl" that was so violent and nihilistic that MTV and VH1 hedged on airing it. When it premiered in March 2001, the stations semi-banned it, giving it only early-morning and late-night play. Which is exactly what the controversial "Like a Prayer" singer was counting on.

But Madge was no longer too sexy for prime time; she was just too violent. "What It Feels Like's" concept, according to Madonna's mouthpiece Liz Rosenberg: "A woman who has probably been abused. It's very strong. It's not the last video you'd want to see before going to sleep at night ... she portrays a woman in a rage, a nihilistic chick who's p---ed off. There is a car crash, she is in the car, but she does not kill herself."

Oh good, as long as she doesn't kill herself.

I find this video extremely sad. Not because of the content, but because it was trying so damn hard to recapture some of that shock value that 12 years prior, when she was performing sacrilegious acts with an African-American Jesus, came so naturally. Now she couldn't even get her damn video banned correctly.

But what's most interesting about this video today isn't even Madonna and her Grandma Thelma and Louise shtick, but that car she's driving. The bright yellow number that says "Pussy" on the front? Did Quentin Tarantino pay Guy Ritchie any royalties when he ended up using a car that color with a similar phrase airbrushed on the back two years later in "Kill Bill"? No? Guess that's the circle of life: Seven years after Tarantino's movie, Lady Gaga would use the exact same car for her video of "Telephone." A video that, by the way, aired on March 11, 2010 (nine years and nine days apart from "What It Feel Like") and created a brief media scandal when it was reportedly banned by MTV for being overly violent and sexual.

Well, you know the old saying: The more things change, the more women ride around in canary yellow cars that scream "Pussy."