Meanwhile, every state wants an early primary and the race may go to the convention 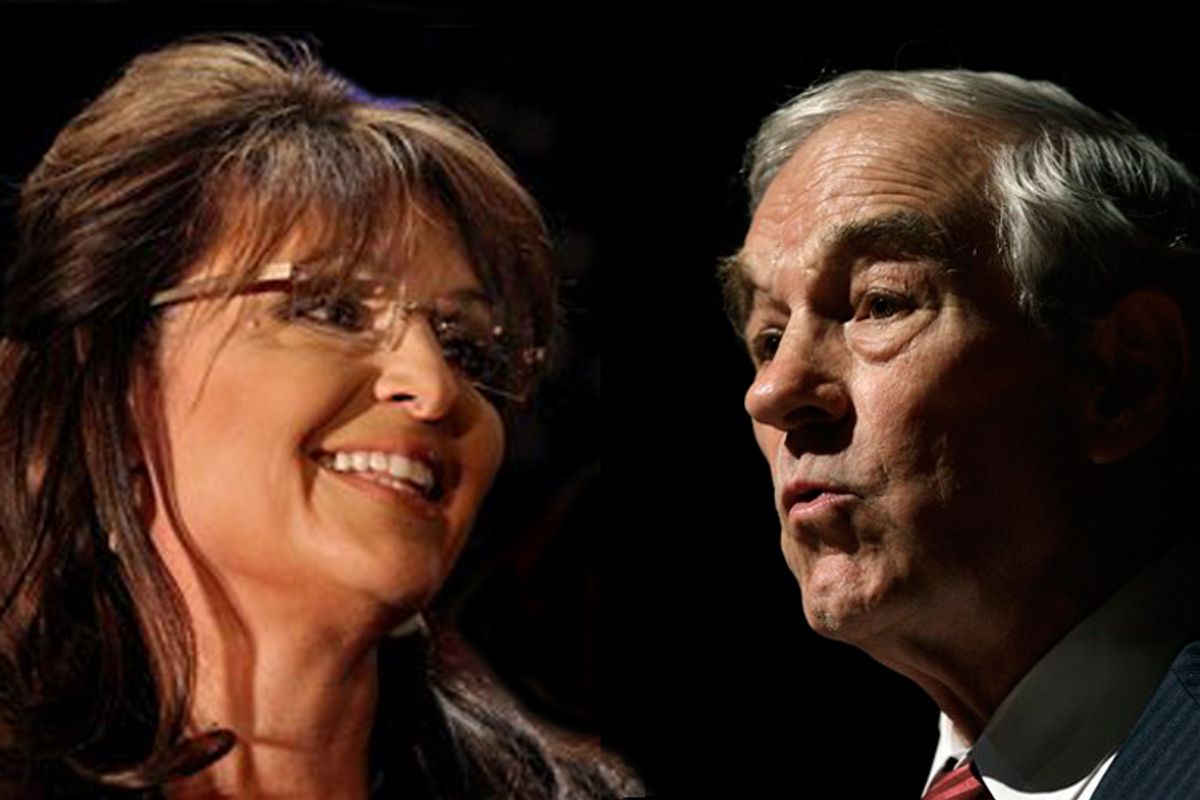 What's up with the 2012 presidential election? It is basically a huge mess. A bunch of losers -- including actual literal losers like Rick Santorum and Haley Barbour -- are pretending they have a shot at winning anything, every single state wants to hold its primary elections on or near Jan. 1, 2012, and various candidates no one in the party likes have probably the biggest actual bases of support. And Ron Paul apparently raised $1 million last month?

Lovable old Paul -- whose probable entrance into the 2012 field will steal the thunder of all the other wacky libertarian candidates -- raised $1.1 million for his PAC. On Presidents' Day. According to the Atlantic, "Paul will use the money to travel to Iowa and New Hampshire next week." (What expensive trips! Is he traveling in a first-class sleeper on the Taggart Transcontinental?)

Paul's 501(c)4 -- the group that isn't subject to the same onerous fundraising restrictions as the PAC -- raised $6.5 million last year, which beats the PACs of Palin and Pawlenty. So it seems like Paul is serious about running again, which is good news for the blimp rental industry.

Of course, Ron Paul has always been quite good at raising money and getting attention. He does rather less well at winning primaries. But maybe an early start would help, because it looks right now like all the primary elections will happen next February.

The Republican National Committee has new rules saying only Iowa, New Hampshire, Nevada and South Carolina can hold their nominating primaries (and caucus) before March 1, 2012. Iowa is set for Feb. 6. Florida -- whoops! -- was scheduled for Jan. 31. But the RNC has apparently persuaded the Florida Senate president to introduce an amendment to existing legislation moving the date to mid-February -- which would put them after Iowa but still in violation of RNC rules. Lots and lots of other states are apparently planning their own primaries and caucuses for Feb. 5. Utah gave up on being early and decided to hold its primary in June, but it seems like everyone else is again just ignoring the rules that allow a certain special precious states to hold its little contests before everyone else.

Oh, and apparently the RNC "quietly adopted rules" saying that states holding primaries before April 2012 have to allocate their delegates proportionally instead of winner-take-all. I think they designed these rules just to make the process as lengthy and painful as possible. As Byron Tau said yesterday:

Such a rule change could mean that candidates who win the early states could nevertheless have trouble assembling the necessary delegates quickly enough, dragging on the primary process.

Exciting! It could even -- not to get everyone's hopes up -- lead to an actual convention floor fight, with some random candidate who never actually won anything outright holding a bunch of precious delegates. Former Republican Sen. Judd Gregg thinks that will be Good News for Sarah Palin!

It also seems like maybe good news for Mike Huckbaee, should he ever decide to stop being Fox News' white born-again male Oprah and make a serious run again. The party establishment largely hates Huckabee, but he came in second or third in 29 states in 2008.

Speaking of people the Republican Party establishment hates, Politico exclusively reported yesterday that the Republican "elite" all think Sarah Palin is stupid and dangerous and vain and shallow. Well, they all use other words but the basic point is that everyone is conceding that liberals were right about her all along.

Charles Krauthammer, George Will, Peter Wehner -- all of these people would be embarrassed about the monster that their years of culture-based populist class warfare against "the elites" created, if they were capable of feeling shame. Instead they are just embarrassed that Palin exists, basically.

Of course, this Politico article about how "the elites" hate her will only make Palin more powerful. She feeds on your attacks!

Palin is a probable loser if she does decide to run -- Americans find her increasingly repellent as her core supporters grow more cultish -- but it will be fun to watch the GOP apparatchiks trip over themselves trying to discredit her without upsetting the riled-up anti-modernity self-pitying masses who make up the party's activist base.

So. This could be a hilarious mess, with reviled outsiders like Palin, Huckabee and Paul running roughshod over the party insiders all the way from the beginning of the year through the August convention ... or Mitt Romney could get this it all sewed up by Memorial Day.