In the latest viral video, a teen turns the table on an attacker -- but is his revenge really that sweet? 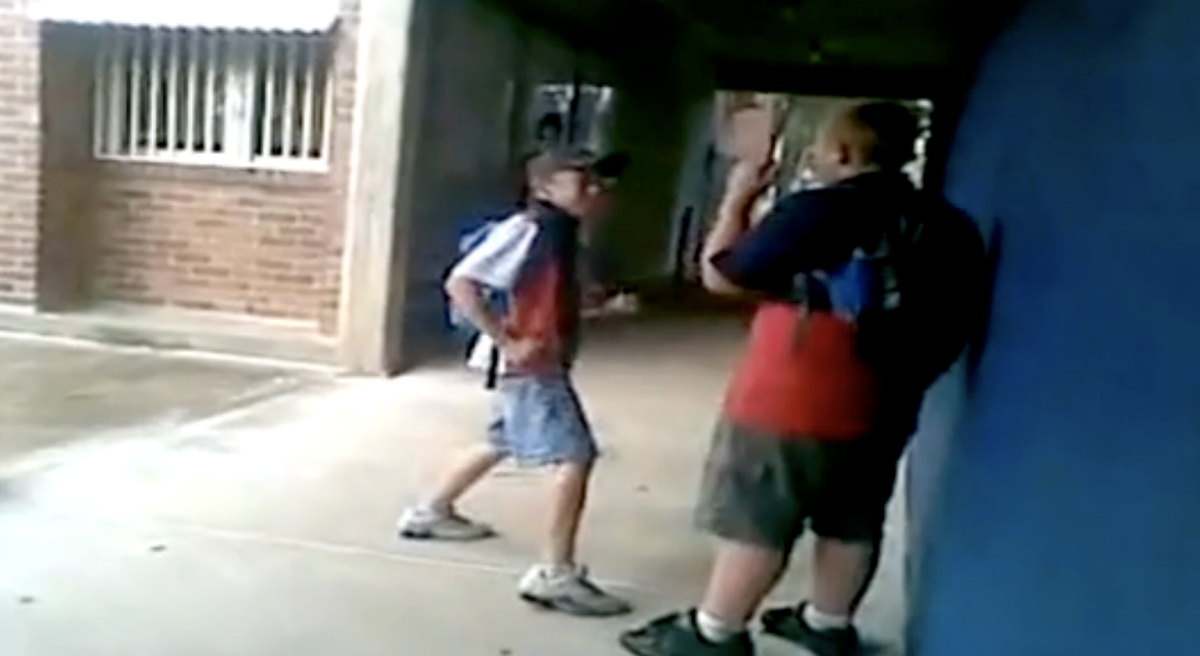 Casey Heynes had had enough. In a viral video that has been circulating this week, the overweight 16-year-old Australian student is confronted by a much smaller boy, three years younger than him, who taunts him as the bully's buddies gleefully record the action. The audio is muffled, but the smaller boy appears to ask, "Have you been talking shit? Huh? Have you been talking shit?" to which Casey, alone and backed up against a wall, replies, "I haven't been talking shit." But the bully hasn't come for meaningful conversation. He grabs Casey by the collar and punches him in the face. He continues to goad him, dancing around with amateurish boxer moves and striking him, while his friends say, "We're laughing at you ... This is getting sad, bro ... Keep recording!" Casey defensively tries to fend off the blows, until he finally picks up the kid and slams him into the ground. The bully staggers back to his mates. And though another boys angrily steps in to confront Casey, he just glares and walks off down a corridor, while a girl who's witnessed the whole thing tells the other kid, "I think you need to back off." Time elapsed from initial confrontation to the skinny kid limping away in defeat -- 41 seconds. That's how long it took for Casey Heynes to go from picked-on kid to viral hero.

The video surfaced Monday, with the explanation that "This 16 year old kid has been tormented every single day of his short high school life - and today he snapped! He was suspended and may be looking at criminal charges, all because this little runt thought he could make an example of Casey in front of his TUFF buddies!!"  and exploded across the Net faster than YouTube could keep taking it down.

Both Heynes and his antagonist are currently on an enforced break from Chifley College Dunheved's Campus, a school that describes itself as a "a safe, supportive and productive learning environment to promote individual achievement and self-responsibility." A spokesperson for the school told the Telegraph it "does not tolerate any violence and deals with all cases according to its community-agreed discipline code. Both students in a fight at the school shown on the Internet have been suspended ... the only injury sustained was a grazed knee.'' That, and what I imagine must be the world's biggest case of wounded pride.

Heynes, meanwhile, has become an overnight folk hero of the modern era of bullying -- an age in which every schoolyard act of cruelty is exacerbated by the tormentor's ability to document and disseminate it. Whether it's gang raping a little girl  or a pack of schoolyard thugs who want to make sure they can relive their sadistic behavior again and again, viciousness is no longer a private act. So when Casey turned the tables, it seemed like an ass-kicking long in the making. The moment that video appeared, the scrawny jerk became more than the focus of Heynes' pent-up, exasperated rage. He took a slam into the concrete for every survivor who's been on the business end of a bully's fists or teasing, for the far too many kids who couldn't survive it.

No wonder Heynes has already been dubbed "Casey the Punisher" in a Facebook fan page, chockablock with Chuck Norris references, that's climbing toward 10,000 members. In his "Off the Bench" column Monday,  Rick Chandler introduced the clip of "the little twerp" getting slammed with the simple directive to "Enjoy." And among the cheers for Casey, Reddit has also become a truly moving repository of similar stories of standing up to bullies and exercising self-defense.

As absolutely essential as it is to raise kids with empathy and sensitivity, to have zero tolerance in our schools or our homes for bullying, and to give kids the tools for effective conflict resolution, the Heynes video is a powerful and necessary reminder to every little Biff Tannen out there that if you're dishing it out, eventually, you're going to take it. But life, especially adolescence, doesn't give satisfying, "Karate Kid"-style happy endings. The "little twerp" has had his name and whereabouts revealed multiple times on Facebook and elsewhere. And however despicable his actions toward Heynes may have been, there's zero satisfaction in considering that a 13-year-old is now finding himself the target of harassment, threats and potentially worse. Frankly, if you truly enjoy watching a scrawny 13-year-old boy getting thrown on the pavement like a rag doll, that 13-year-old bully isn't the only cruel one. And there's no satisfaction whatsoever in wondering what kind of retribution potentially awaits Casey Heynes in the schoolyard. That other kid in the video, the one the girl told to back off? At the end of the clip, he's walking around her right down the same corridor, hot on Casey's heels.