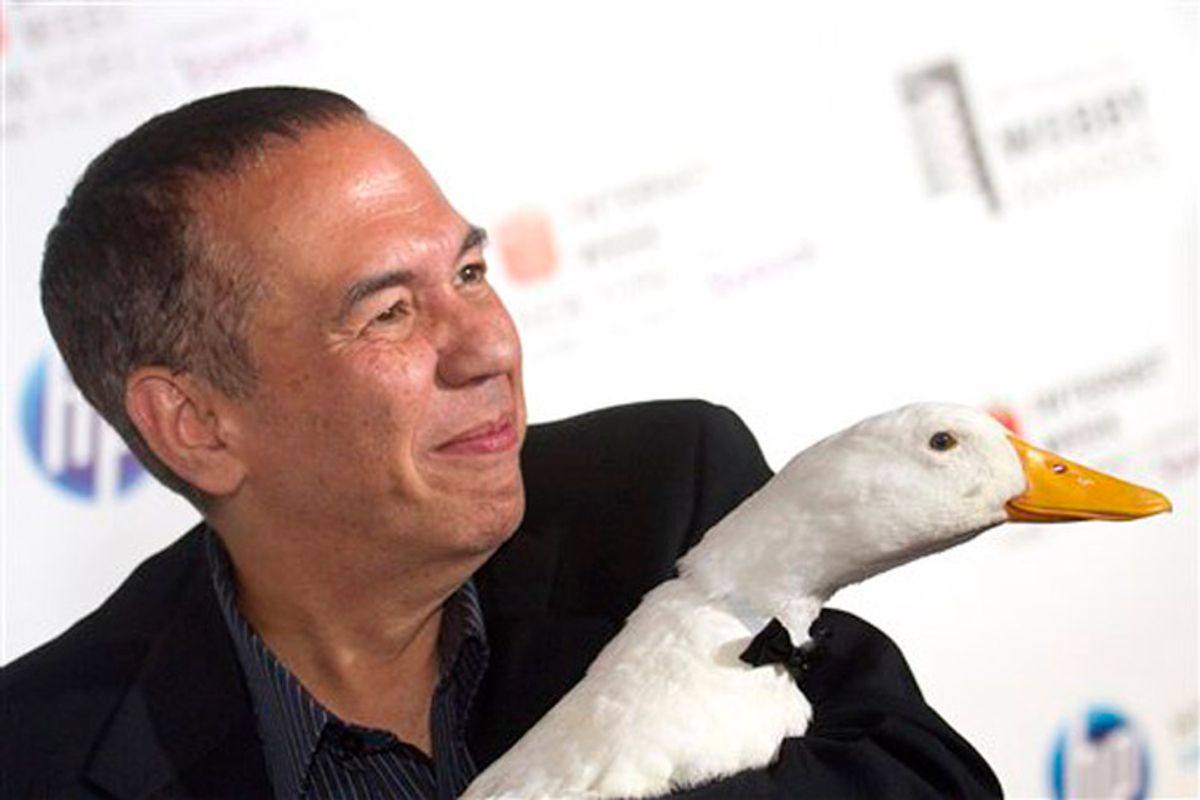 Too soon. After sending out a series of jokes about the Japanese earthquake and tsunami on his Twitter feed, comic Gilbert Gottfried has been roundly excoriated for his poor judgment, and on Monday, he lost his gig as the voice of the Aflac duck. Though he's since deleted the offending gags, nothing ever goes away on the Internet. Buzzfeed compiled 10 of the more outrageous ones -- a relentless string that included the observation that "I was talking to my Japanese real estate agent. I said 'is there a school in this area.' She said 'not now but just wait'" and "I asked a Japanese girl to sleep with me. She said 'okay, but you'll have to sleep in the wet spot.'" Aflac, the No. 1 insurance company in Japan, said in a statement that the comments "were lacking in humor and certainly do not represent the thoughts and feelings of anyone at Aflac."

Gottfried isn't the first person in history, or indeed, even this week, to bomb. Michael Sorrentino, better known as The Situation, drew boos a few days ago at the Donald Trump roast for his crass, racist remarks. Do you know how hard it is to offend at a roast? For Donald Trump? And the always willing to say the wrong thing 50 Cent tweeted this weekend that "Its all good Till b*tches see there christian louboutins floating down da street shit gone get crazy" and "Look this is very serious people I had to evacuate all my hoe's from LA, Hawaii and Japan."

But the distinction between The Situation and 50 Cent and Gilbert Gottfried is that when The Situation and 50 Cent fall flat in their jokes, it's because they aren't comedians. There's something that rings especially offensive when someone unskilled in the craft of humor attempts it and flubs -- it's like listening to Pierce Brosnan sing. Gottfried, on the other hand, may not be your cup of comedy tea, but he hasn't been at this for over 30 years for nothing. And he's been shocking people just as long.

Gottfried is known for a variety of things: the voice of the parrot in "Aladdin," that Aflac duck, one of the millions of veterans of "Saturday Night Live." He's also the man who, nearly 10 years ago, introduced us formally to the concept of "Too soon!" At a Friar's roast for Hugh Hefner just two weeks after 9/11, Gottfried got up and quipped that he was trying to get a flight to Los Angeles, but "they said they have to connect with the Empire State Building first," inspiring that now-famous cry for comedic restraint in the face of disaster. Gottfried went on to win back the crowd by delivering a stunning version of the classic "aristocrats" gag -- and Frank Rich later called the performance, 9/11 bit and all, "greatest dirty joke ever told." "At a terrible time it was an incongruous but welcome gift," he wrote. "He was inviting us to once again let loose."

Of course, Gottfried was letting loose within the very culture that had suffered a blow. He wasn't an outsider halfway around the world. And two weeks after 9/11, the smoke had mostly cleared and the dead were largely accounted for. Japan is still very much under siege. They say comedy is tragedy plus time, but how much time, exactly? Heard any good Katrina jokes lately? When was the last time somebody really killed on Conan with a routine about Darfur? And even when the cathartic power of humor finds its way into a harrowing story, there's still a different level of acceptance for finding the funny in a movie clip about Hitler's last days  and out and out riffing on the Holocaust.

Was it insensitive for Gottfried to make light of human tragedy -- and foolish to bite the quacking hand that feeds him? Absolutely. But what is a comic but another word for a fool? He was clumsy and tasteless, that's why he removed the posts. He told the Hollywood Reporter Tuesday, "I sincerely apologize to anyone who was offended by my attempt at humor regarding the tragedy in Japan. I meant no disrespect, and my thoughts are with the victims and their families." But relatively speaking, Gottfried's ill-considered attempt at levity at a horrible moment still seems considerably less stupid than Glenn Beck's cackling speculation that the earthquake was "a message" from God to follow the Ten Commandments. At least Gottfried knew what he was saying was over-the-top and ridiculous. He intended it to be so.

In the wake of unsurpassed devastation, it's hard to find anything to smile about. Gottfried's instincts were a comic's: to look at catastrophe and try to attack it with the main weapon in his arsenal. In the worst moments of life, humor can be a potent force for healing (think of The Onion's brilliant post-9/11 coverage) -- or salt in a still bleeding wound. Gottfried was likely trying to lash out at the horror of the quake itself, but the barbs fell too close to its victims. And while timing is everything in comedy, for one comic, never might be too soon to start joking about this as-yet-unfathomable disaster.