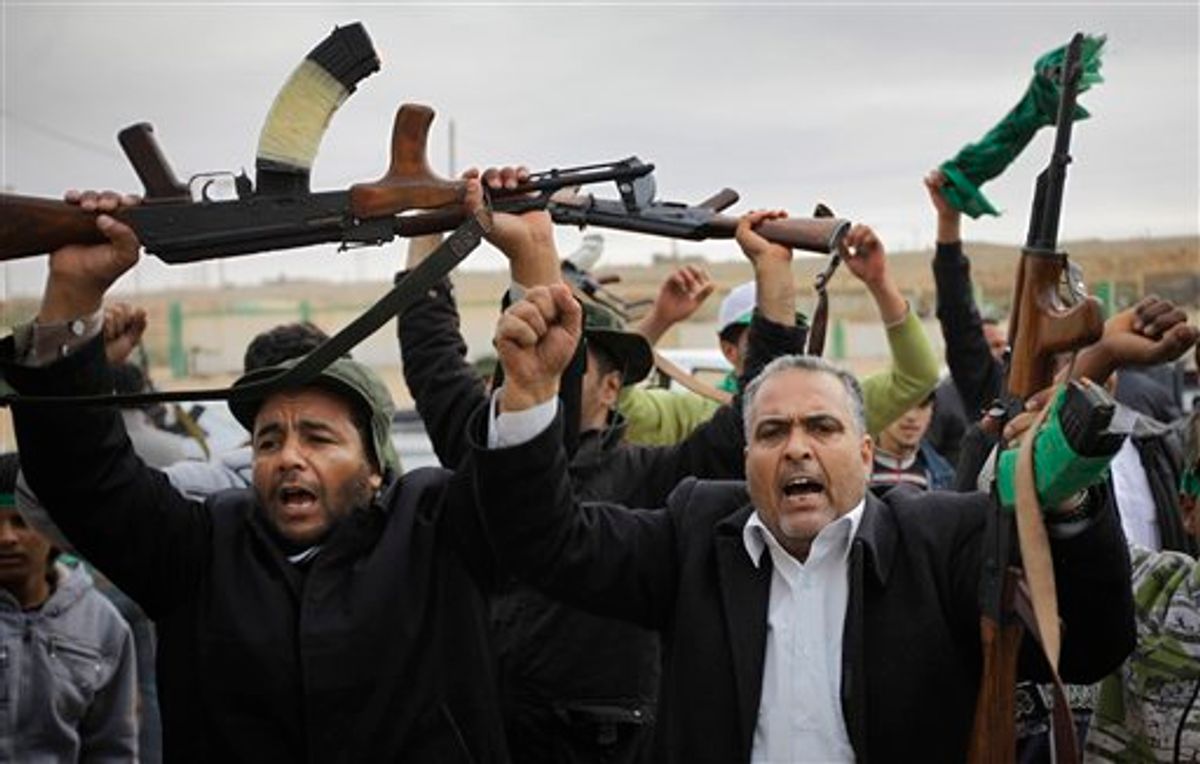 Moammar Gadhafi's forces captured the last rebel-held town west of Tripoli after a heavy barrage of tank and artillery fire Tuesday as regime forces pressed forward in the east.

The victory in Zwara, about 30 miles (50 kilometers) from the Tunisian border, solidifies Gadhafi's hold in his western stronghold, reversing gains made by rebels in several cities early in the uprising against his rule that began on Feb. 15.

Gadhafi's gains in recent days have increased pressure on the U.S. and other Western powers to intervene to stop the bloodshed.

The Obama administration on Monday held its first high-level talks with the Libyan opposition and introduced a liaison to deal full time with their ranks. But it remained undecided about exactly how much support to lend a group it still knows little about while turmoil and uncertainty increase across the Arab world.

Government troops surrounded the town of 45,000 on Monday and bombarded it with tanks and artillery for hours starting in the morning, killing at least four rebel fighters, several residents said.

Rebels conceded that Zwara had been taken by government forces on Tuesday, although sporadic street battles were ongoing.

Most of the fighting was concentrated in the seaside suburbs of the town, leaving residential buildings pockmarked from shrapnel, one rebel said. Most civilians had fled.

The fighter, who spoke on condition of anonymity for fear of reprisals, said rebels were tossing dynamite and shooting at army troops patrolling the town in cars packed with seven to 10 soldiers, many sitting in the open trunks of the vehicles. But he said the attacks were designed to wear down Gadhafi's better-equipped forces, not to defeat them.

"You can't fight an organized army that has tactics and military preparation. But we have people ready to die -- our will is greater -- and in the end, every oppressor has an end," he said in a telephone interview, as celebratory gunfire from Gadhafi's forces rang out in the background.

Another fighter in Zwara said the rebels were still in "shock" and were quietly walking about town in civilian clothing, trying to assess the situation.

Government troops have scored victories using overpowering bombardments with artillery, tanks, warplanes and warships. Such an assault drove rebel fighters out of the western city of Zawiya last week.

A doctor said naval ships in the Mediterranean port were preventing aid ships from bringing much needed goods.

"We are short on antibiotics and surgery supplies and disposable equipment," the doctor said. "We feel so, so, isolated here. We are pleading with the international community to help us in this very difficult time."

Rebels in the east, meanwhile, were fortifying the town of Ajdabiya against a possible assault by Gadhafi's forces.

Rebel spokesman Ahmed al-Zwei said Tuesday that "intermittent" fighting between the two sides was taking place on a 50-mile (80-kilometer) stretch of road between Ajdabiya and the oil port of Brega. Control of Brega has been split between the rebels and regime forces after days of fierce clashes.

Recapturing Ajdabiya would give Gadhafi's forces a significant boost as they continue to reverse the string of rebels' military successes when they began a march from the opposition-held east of the country to the capital of Tripoli.

On the diplomatic front, U.S. Secretary of State Hillary Rodham Clinton held a 45-minute meeting late Monday in Paris with a senior Libyan opposition figure after discussing the widening crisis with French President Nicolas Sarkozy. Sarkozy, along with British Prime Minister David Cameron, meanwhile, stepped up calls for world powers to isolate Gadhafi with a no-fly zone, amid diplomatic differences over how much backing to give rebels.

Clinton's closed-door meeting with opposition figure member Mahmoud Jibril in a luxury Paris hotel was shrouded in secrecy until it happened, with neither the time nor the identity of her interlocutors announced beforehand.

Neither Jibril, an official in the newly formed Interim Governing Council based in the eastern Libyan city of Benghazi, nor Clinton appeared or made any comments about their talks. Jibril met with Sarkozy in Paris last week before photographers and journalists.