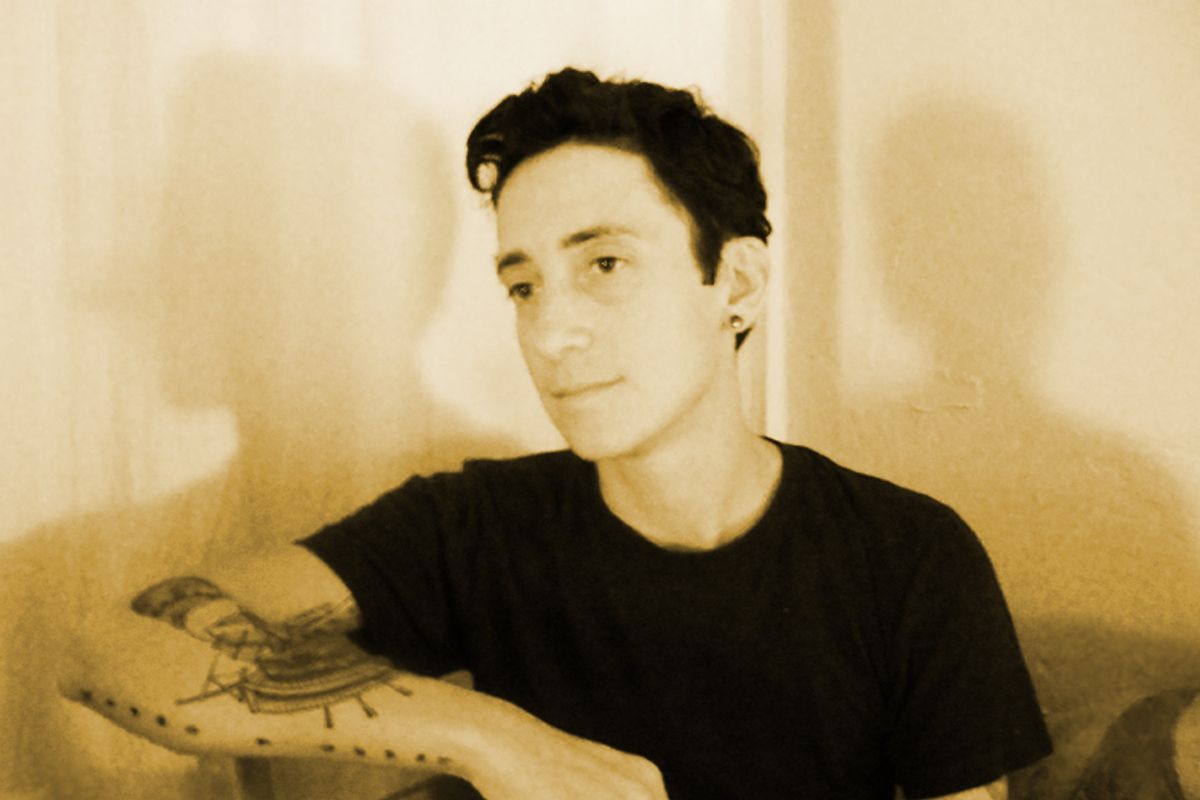 In June of 2008 I woke up in a surgery recovery room in San Francisco with a man's chest. I couldn't see it yet, of course. My torso was bruised and bandaged after the three-hour procedure and drains dangled wildly at my sides. My breasts sat idly, waiting for pickup in the biohazard bin in the cold operating room. A nice nurse gently held me down as I tried to stumble out of bed, slurry but clear in my ambition to get out and on with my new life: created, like my unicorn body, with a big-hearted hope that I could be both of this world and fully myself.

I'd bought a whole new wardrobe of tight men's T-shirts I knew I'd be proud to wear in the days ahead and that's pretty much all I'd planned. Living in the Bay Area, I was lucky enough to be surrounded by transgender and queer people, but many of them assumed I'd be transitioning genders. I hadn't decided if I wanted to begin hormone therapy and become a man. I also hadn't anticipated how complicated it would be not to.

I was born female and I'd always dreamed not of manhood, exactly, but of a manly ambiguity: lithe but masculine, more James Dean minus the facial hair than Bowie-eque glam-rock performativity. It's hard to explain, but I didn't want to be a man or a woman. I wanted to be myself: tattooed, rebellious and stylishly unnameable. I wanted to live outside of bathroom politics and stereotypes, of Mars/Venus expectations and limitations. Gender, for me, is a slippery place -- not easily defined but also not what defines me.

Growing up gay in a small town outside of Pittsburgh, I swaggered through school without too many scrapes. In second grade, I ripped around on a mini-motorcycle, short-haired and the alpha in my group of puny dude friends. Later, I dated a homecoming queen and straight art-school hipsters who were more interested in the fact that I was a wildly romantic poet than the fact that I wasn't a guy. You're just Page, they'd say with a shrug. High school and college friends all seemed to get me without much effort and -- to a person -- they supported my oft-discussed desire for top surgery with that same nonchalant, it-makes-perfect-sense ease.

Perhaps, then, it won't seem so naive when I say that I was surprised to find myself at 27 -- in the post-surgery body I'd long pined after -- utterly illegible. I knew a transition had taken place -- that I'd landed squarely in a brand-new territory, one that allowed me to be myself -- and that space between felt familiar and right. It's just that what was obvious to me was not to almost everyone else.

In the days and months and years following my recovery, I wore men's clothes that fit and flattered me and worked out my chest, but my skinny frame didn't seem to hold muscle. I realized, slowly, that to most people I looked just about the same. Though my once large chest was now completely flat, my face and body were unchanged. I was skinny, long in the face and narrow-shouldered.

The problem with not being recognizable is that you're easily aligned with the nearest signifier. I used the men's room sometimes and the women's mostly -- because guys looked at me askance in a way they hadn't when I swam in ill-fitting, teenage boy clothes and hats. I still left on a tank top over my trunks every time I went swimming because the combination of my female body and male chest seemed to cause discomfort and even sometimes aggravation in those around me. Some people didn’t understand, while others felt challenged or confused, but it was those who failed to notice at all that startled me the most. The physical change that revolutionized me was invisible to almost everyone else, even as I felt more complete in myself, healthier, happier and profoundly different.

As I hit 30, I find myself referred to constantly -- despite my masculine attire and appearance -- as "ma'am" or "lady" or "Ms.," even by friends and colleagues who know of my complicated body. Men my age look much less like me than my early-20s counterparts did. I still don't know if I'm between stations on my way to a different destination, or if this liminal road is, in fact, my path. About once a month I soul-search and reconsider taking hormones. I wonder if, as I get older, I might look more like myself with a little scruff on my skinny face. I keep coming back to something that tells me to wait it out, and so I do.

And yet every once in a while, I feel at home exactly as I am. On a writing residency in Mexico with a bunch of queer writers, I tore off my T-shirt and swam, chest exposed, in the Caribbean. I snorkeled over angelfish, swallowed accidental mouthfuls of salt, and floated in the sun. An occasional tourist stared curiously at me, but the misfit gang ashore was prepared to give the hairy eyeball to anybody who stopped for too long, and I didn't care about the onlookers, anyway. I've never felt more gloriously myself. If everyone got a day like that with their bodies and the world around them -- so free of negotiation and anxiety -- I am confident that the shift in how we treat each other and ourselves would be incredible.

Maybe the real struggle is to re-create that feeling away from the suspended space of vacation, in a day-to-day that doesn’t have the vocabulary for what I want to be. Maybe I have to accept that the world I live in and the body I have might always be at odds, and the real challenge is to learn how to occupy them both with grace.

Page McBee is the 2009 recipient of the Mary Tanenbaum Literary Award for Nonfiction from The San Francisco Foundation and Intersection for the Arts. Page's work has been featured most recently in the New York Times, Bitch Magazine online, The Bold Italic and on KQED in San Francisco. Page writes for the fashion blog Ironing Board Collective and the SF Weekly blog, the Exhibitionist. To learn more, visit www.pagemcbee.com.