New York crime spree suspect told cops: I had "doozy of a day" 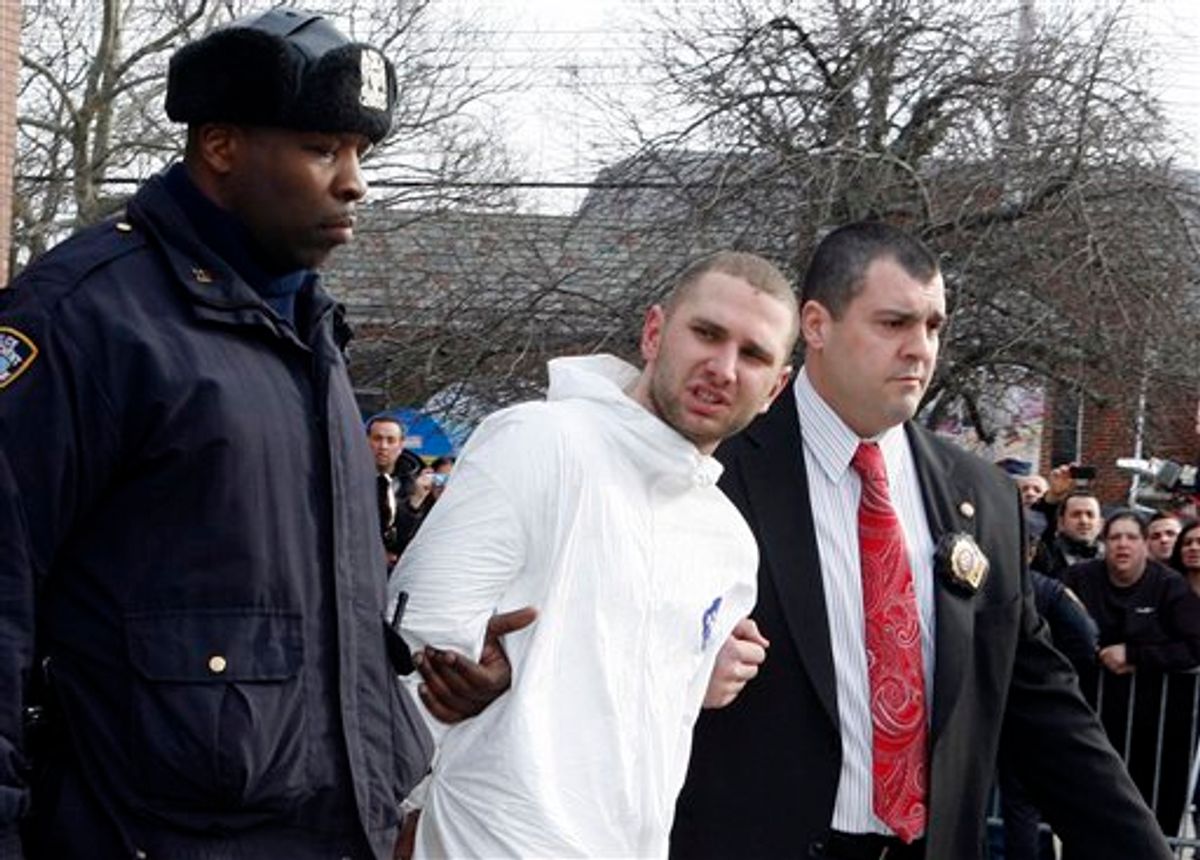 Maksim Gelman, of Brooklyn, who is accused of going on a 28-hour stabbing rampage through New York City, center, is lead by officers outside the 61st Precinct in the Brooklyn borough of New York Sunday, Feb. 13, 2011. (AP Photo/David Karp) (AP)
--

A man accused of killing four people and wounding four others in a 28-hour rampage told police he had cancer, lamented his family life, said he wished police had shot him and declared he had experienced "a doozy of a day," authorities said in a court document released Tuesday.

As Maksim Gelman appeared for a court date via video link from a hospital, Manhattan prosecutors filed an account of his remarks to officers after his Feb. 12 arrest. Meanwhile, a lawyer entered Gelman's not-guilty plea for him in a subway stabbing.

Authorities say Gelman's sudden kitchen-knife attack on a subway rider marked the end of a spree that stretched from Brooklyn to Manhattan and included killing a relative and acquaintances, running over a pedestrian, carjacking and other violence. Police tackled Gelman and arrested him on a subway train beneath Times Square.

"I'm sorry, I'm sorry," he told officers after his arrest and added, "I would've been better off if you shot me," according to the document filed Tuesday. He soon acknowledged having knives and razor blades in his coat pocket and said, "I'm the guy you're looking for," adding an unexplained comment about getting "a raw deal" from the FBI, the document said.

He went on to say that his family was messed up and warned an officer to "stay away from angel dust," a street term for the powerful hallucinogen PCP, according to the document.

"I did this because I have cancer," he added, according to the document.

Gelman's lawyer, who was at the hospital with him Tuesday, didn't immediately return a phone message left by The Associated Press after the hearing. Gelman didn't speak and watched the proceeding calmly from a chair in a hospital where he is being held without bail.

Gelman previously told reporters the case was a setup and that his mind sometimes "isn't right." Another of his lawyers later got a court order barring the media from interviewing him.

The Ukraine-born Gelman's deadly spree started with a family argument over the use of Gelman's mother's car, police said.

After killing his stepfather, Aleksandr Kuznetsov, 54, in the family's Brooklyn apartment, Gelman went to the home of a female acquaintance, Yelena Bulchenko, 20, police said. Bulchenko's friends have said he was obsessed with her and imagined a romantic relationship with her.

Gelman killed her mother, 56-year-old Anna Bulchenko, waited hours for the daughter to return and stabbed her 11 times, authorities said.

Gelman made a disjointed and profanity-laced comment to an officer about "her ... mother, man, and my ex-girlfriend, you know how it is," according to the document filed Tuesday.

Stealing the wounded man's car, Gelman drove off and plowed into pedestrian Stephen Tanenbaum, 62, who died from his injuries, police said. After abandoning the car, Gelman later hailed a livery cab and attacked its driver, then approached another car, attacked a man inside and seized the car, police said. Both men survived.

All those attacks happened in Brooklyn. Gelman was next spotted on a subway in Manhattan, where passengers recognized him from newspaper photographs and notified police, authorities said. He dashed across the tracks, switched trains and attacked passenger Joseph Lozito, telling him "You're going to die!" authorities said. Lozito, of Philadelphia, survived head and arm wounds that needed dozens of stitches and staples, authorities said.

Gelman has a court date April 12 in Brooklyn, where he faces murder and other charges; he has not yet entered a plea to them. His next Manhattan court date is in June.