Australia, France, U.K. and others all urge those with nonessential business in Japan's capital to evacuate 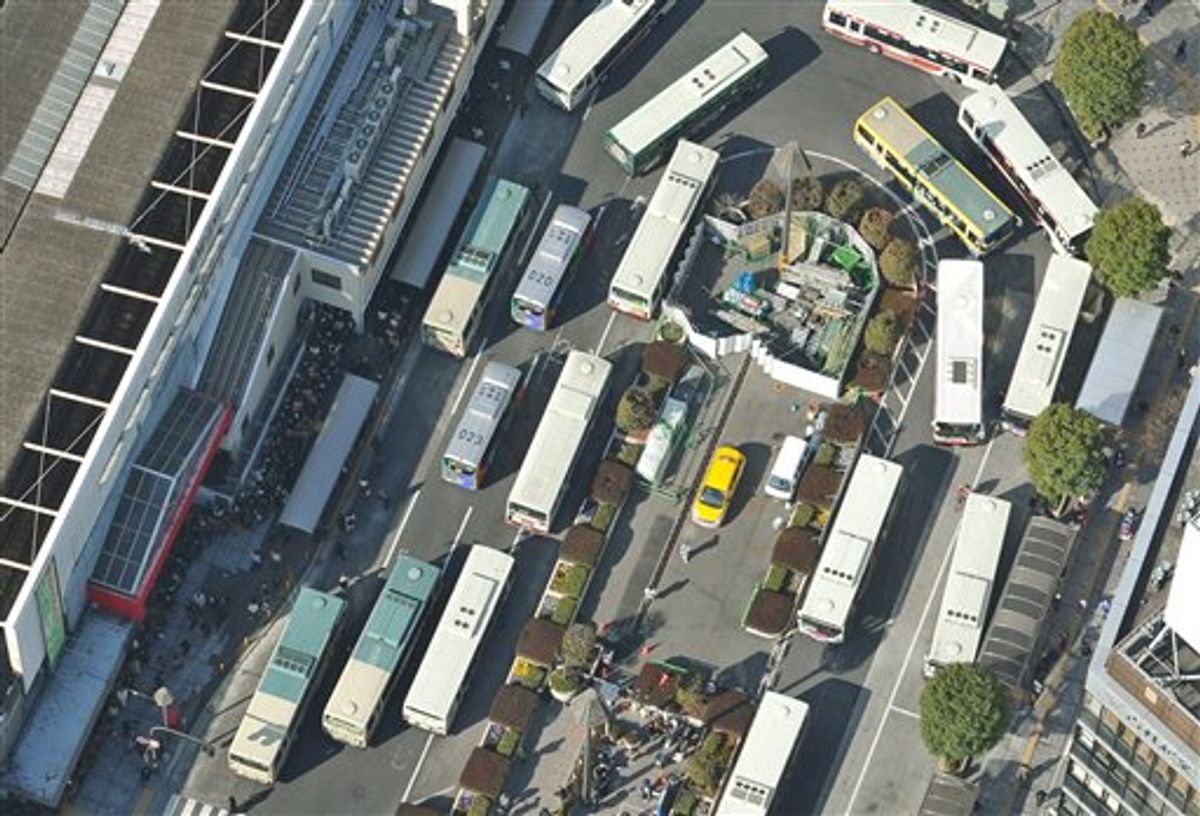 Buses crowd at bus terminal in Musashino, on the outskirts of Tokyo Monday, March 14, 2011. In Tokyo and elsewhere, authorities began rolling blackouts to conserve power as they tried desperately to stabilize the nuclear reactors at risk of meltdown in the aftermath of the earthquake and tsunami. (AP Photo/Kyodo News) JAPAN OUT, MANDATORY CREDIT, NO SALES IN CHINA, HONG KONG, JAPAN, SOUTH KOREA AND FRANCE (AP)
--

Australia advised its citizens in Japan on Wednesday to consider leaving Tokyo and earthquake-affected areas, joining a growing number of governments and businesses telling their people it may be safer elsewhere.

The Department of Foreign Affairs and Trade said in a travel advice update that Australians with no need to be in the area should think about leaving but added that the decision had nothing to do with the threat of nuclear contamination from a damaged nuclear power plant.

"We are providing this advice because of the continuing disruption to major infrastructure, its impact on the welfare of people on the ground and continuing aftershocks," the notice said.

Concerns about radiation, however, were at the forefront of other countries' worries as the situation at the Fukushima Dai-ichi nuclear plant appeared to worsen. Surging radiation levels forced Japan to order emergency workers to temporarily withdraw from its crippled nuclear plant Wednesday, losing time in a desperate operation to cool the overheating reactors.

Tokyo, which is about 170 miles (270 kilometers) from the stricken nuclear complex, reported slightly elevated radiation levels Tuesday, but officials said the increase was too small to threaten the 39 million people in and around the capital.

France urged its citizens with no reason to stay in Tokyo return to France or head to southern Japan. The government has asked Air France to mobilize aircraft in Asia to assist with departures.

More than 3,000 Chinese have already been evacuated from Japan's northeast to Niigata on Japan's western coast, according to Xinhua News Agency. On Tuesday, Beijing became the first government to organize a mass evacuation of its citizens from the quake-affected area.

Other governments, including the U.S. and U.K., are taking a more measured approach.

The U.K Foreign & Commonwealth Office advises against all nonessential travel to Tokyo and northeastern Japan. It urges British citizens in the country to observe Japanese authorities' advice, which includes a 20-kilometer (12.4-mile) exclusion zone around the Fukushima nuclear plant.

It said it is actively monitoring the situation.

"If we assess that the radiation poses a threat to public health, we will share that information and provide relevant guidance immediately," Roos said.

The Philippine Embassy in Tokyo told its citizens to follow advisories issued by Japanese authorities. It added, however, that Filipinos who are concerned about possible radiation exposure "may wish to voluntary relocate to areas further away, or depart voluntarily from the country using their own means."

If relocation and repatriation become necessary, the Philippine government will defray the costs involved, the Department of Foreign Affairs said in a statement.

An Indian software services company, L&T Infotech, on Wednesday ordered the temporary evacuation of 185 employees and their family members from Japan. It said in a release that it had chartered a special Kingfisher Airlines flight that will depart Friday to Chennai, India.

Cirque du Soleil has also decided to move its performers and staff working in Japan to Macau, said spokeswoman Chantal Cote in an e-mail. Its show "ZED" is based at Tokyo Disneyland, the touring "KOOZA" show was performing at the Fuji Dome in Tokyo.