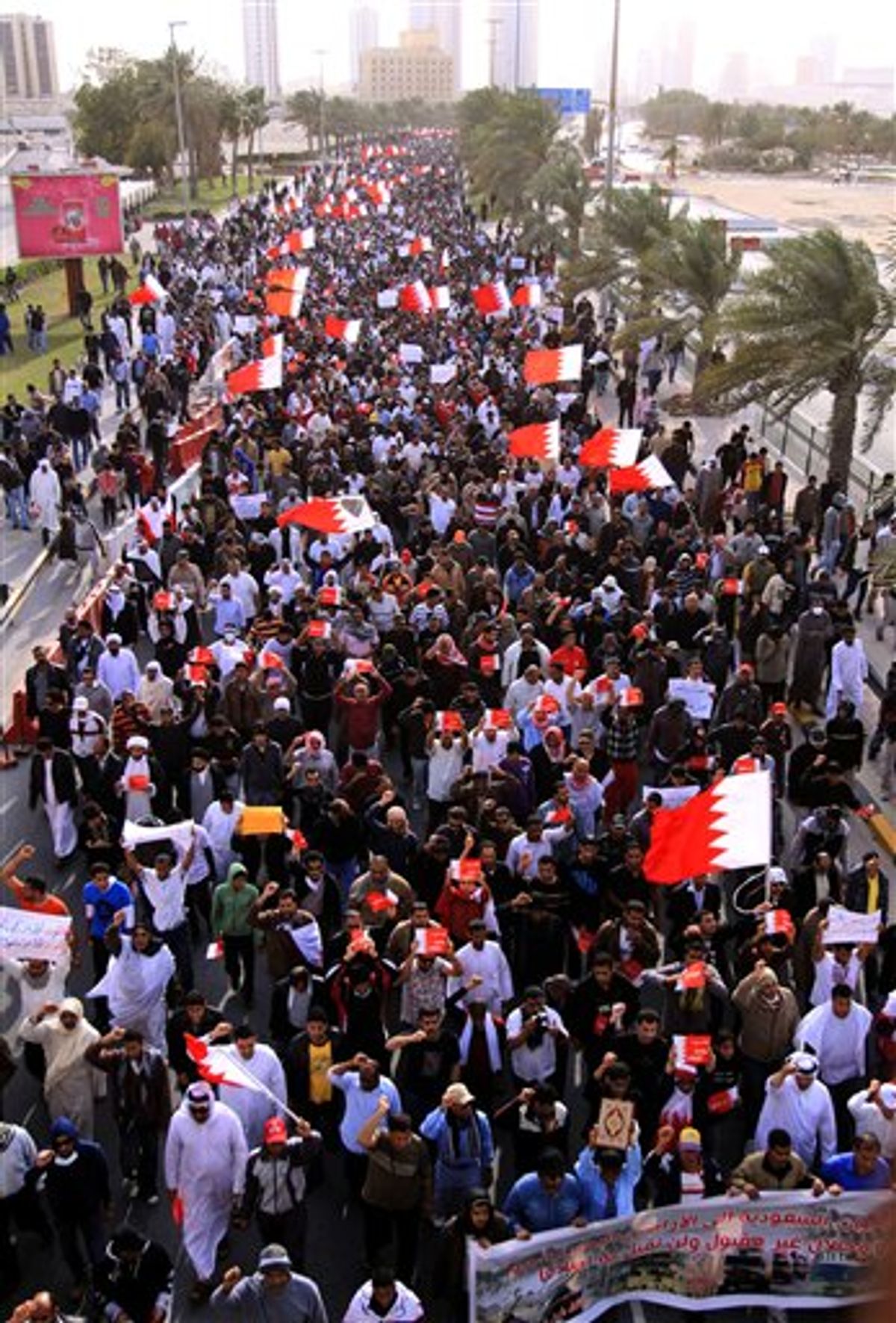 Thousands of anti-government protesters march Tuesday, March 15, 2011, to the Saudi embassy in Manama, Bahrain. Bahrain's king declared a three-month state of emergency Tuesday to quell a Shiite uprising, as clashes spread through the capital and surrounding villages in a showdown that drew in the region's major powers and splintered along its main sectarian faultlines. At least two Bahrainis and a Saudi soldier died, and hundreds of protesters were injured by shotgun blasts and clubs. (AP Photo/Hasan Jamali) (AP)
--

Soldiers and riot police used tear gas and armored vehicles Wednesday to drive out hundreds of anti-government protesters occupying a landmark square in Bahrain's capital, a day after emergency rule was imposed in the violence-wracked Gulf kingdom. At least six people were killed, according to witnesses and officials.

The full-scale assault launched at daybreak swept into Pearl Square, which has been the center of uprising against Bahrain's rulers since it began more than a month ago. Stinging clouds of tear gas filled streets and black smoke rose from the square from the protesters' tents set ablaze.

Witnesses said at least two protesters were killed when the square was stormed. Officials at Ibn Nafees Hospital said a third protester later died from gunshot wounds in his back. The witnesses spoke on condition of anonymity because of fears of reprisals from authorities.

Meanwhile, Bahrain state TV also reported that two policemen died when they were hit by a vehicle after anti-government protesters were driven out. The Interior Ministry also at least one other policeman was killed, but did not give the cause.

It was unclear whether the offensive included soldiers from other Gulf nations who were dispatched to help Bahrain's Sunni monarchy, which has been under relentless pressure from the country's majority Shiite Muslims to give up its monopoly on power.

But state TV broadcast video showing military vehicles in the square flying Bahrain's red-and-white flag as security officials moved through the wreckage of the encampment, set up at the base of a towering monument to the country's history as a pearl diving center. The video showed the ground littered with debris, including satellite dishes and charred tent poles.

Helicopters crisscrossed over the square, which was cleared by security forces late last month but was later retaken by protesters after a deadly confrontation with army units.

Protesters fled for cover into side streets and security forces blocked main roads into Manama. Mobile phones were apparently jammed in central Manama during the height of the attack and Internet service was at a crawl.

Hamid Zuher, a 32-year-old protester who slept at the square, said riot police first moved in on foot through a haze of tear gas, firing in the air.

"They fired tear gas and then opened fire," Zuher said. "We lifted our arms and started saying 'Peaceful, Peaceful.' Then we had to ran away. There was so much tear gas and shooting."

In Shiite villages, people went to mosques to pray in a sign of protest against the Pearl Square crackdown. Others lit fires in anger. Clashes were reported in other mostly Shiite areas of the country, where traffic was tightly controlled by military forces in an apparent attempt to prevent protest gatherings or a surge of people toward the capital.

The roadblock also kept protesters possibly injured in the Pearl Square raid from reaching the main state hospital, which was working on generator power. The extent of the blackout in Manama was not immediately clear.

The official Bahrain news agency said the emergency rule bans "rallies and disrupting the public order" and imposes "movement restrictions" and possible curfews in some locations.

For Bahrain's authorities, clearing Pearl Square would be more of a symbolic blow against protesters than a strategic victory as opposition groups are still be able to mobilize marches and other actions against the leadership.

Bahrain's king on Tuesday declared a three-month state of emergency and instructed the military to battle unrest in the strategic nation, which hosts the U.S. Navy's 5th Fleet. Shortly after the announcement, clashes erupted across the island nation, killing at least two civilians. Saudi officials also said one of it's soldiers was killed.

Bahrain's sectarian clash is increasingly viewed as an extension of the region's rivalries between the Gulf Arab leaders and Shiite powerhouse Iran. Washington, too, is pulled deeply into the Bahrain's conflict because of it's key naval base -- the Pentagon's main Gulf counterweight to Iran's growing military ambitions.

On Tuesday, Iran and it's allied force in Lebanon, Hezbollah, denounced the presence of foreign soldiers in Bahrain. Iran has no direct political links with Bahrain's main Shiite groups, but Iranian hard-liner in the past have called the tiny island nation that "14th Province" of the Islamic Republic.

Gulf rulers, particularly Saudi Arabia, fear that the collapse of Bahrain's Sunni monarchy could embolden further revolts across the region and embolden the Saudi Shiite minority whose home region is connected to Bahrain by a causeway.

"We call for calm and restraint on all sides in Bahrain," Clinton told reporters in Cairo, where she was urging on democratic currents that chased Egypt's Hosni Mubarak from power last month.

The intervention of more than 1,000 Saudi-led troops from several Gulf nations was the first major cross-border military action to challenge one of the revolts sweeping across the Arab world. The Al Khalifa family has ruled Bahrain for 200 years.

The foreign troops are from the six-nation Gulf Cooperation Council's Peninsula Shield Force. The bloc is made up of Saudi Arabia, Oman, Kuwait, Bahrain, Qatar and the United Arab Emirates -- all largely Sunni countries that have nervously watched the Arab world's protests. The Saudi government on Tuesday withdrew accreditation to the chief Reuters correspondent there, complaining about a recent report on a protest in the kingdom. Reuters stood by its coverage.

Iran denounced the foreign intervention as "unacceptable" and predicted it would complicate the kingdom's political crisis.

A security official in Saudi Arabia said a Saudi sergeant was shot and killed by a protester in Bahrain's capital, Manama. No other details were immediately given on the death of the soldier, identified as Sgt. Ahmed al-Raddadi. The Saudi official spoke on condition of anonymity because he was not authorized to talk to the media.